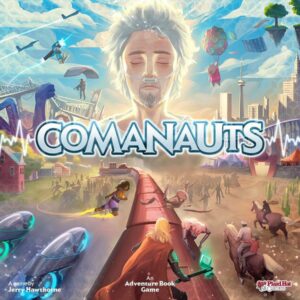 This spoiler-free Comanauts review was made after playing through one campaign (all two-player games).

Comanauts is a cooperative storytelling game in which you play as a group of scientists who are attempting to wake a doctor from his coma so he can save the world. Your goal is to go into his subconscious and try to free him from his inner demons.

Comanauts was designed by Jerry Hawthorne and is published by Plaid Hat Games. This is the second game in their Adventure Book series after Stuffed Fables. 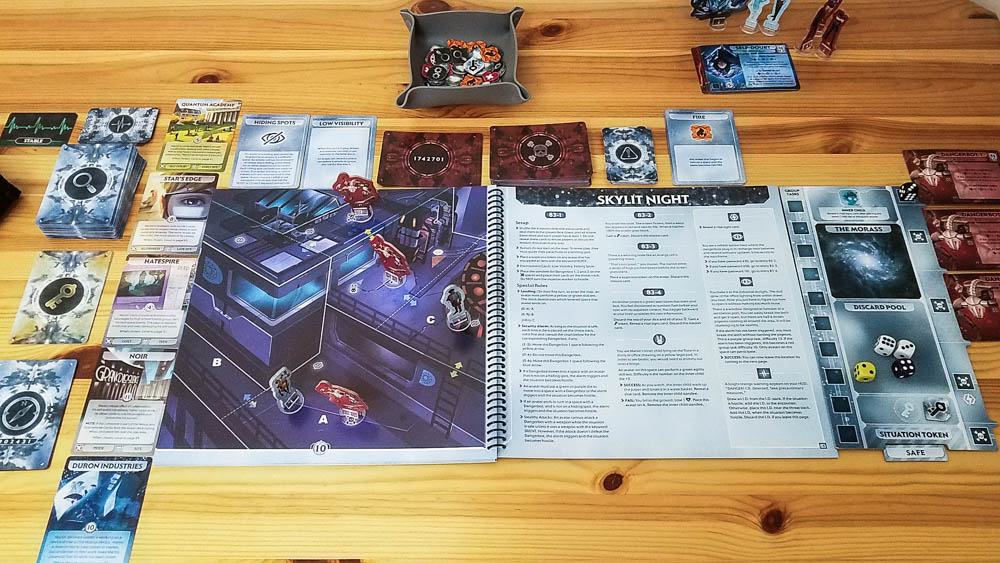 In Comanauts your job is to explore Dr. Strobal’s mind, fight through his inner demons, and eventually find and destroy his Prime Inner Demon (Prime I.D.). The reason you need to wake him up is because his Mobius Ring, an invention that was created to provide the world with clean energy, has malfunctioned and threatens to consume the world unless he fixes it.

Gameplay is very similar to Stuffed Fables. The adventure book has the boards that you’ll play on, story text, setup instructions, and any other special rules for each page. You can play a one-off game where your goal is to find a single Prime I.D., or you can play through a campaign (recommended) where you’ll need to defeat multiple inner demons and unlock more of the story.

Your characters are avatars that have played a big part in Dr. Strobal’s life and/or dreams, and each one has their own unique special abilities and areas (comazones) where they are suspicious. You’ll gain items throughout the game, some of which you can equip to make your avatar stronger.

Pretty much everything you do in Comanauts revolves around using dice. On your turn, you’ll draw five dice from the bag and use those dice to perform actions. Different colored dice allow you to perform different actions, such as the red dice for melee attacks and the yellow dice for search actions. You can also discard two dice to take any die that was previously discarded. If you draw the Inner Child die, you’ll draw a vital signs card and then place the inner child standee on the board; the inner child can give you important clues about the Prime I.D.’s whereabouts. You can also reserve dice for future turns and you can use dice to help other players.

Whenever you reach certain marked spots on a page, you’ll read those entries in the adventure book before continuing your turn. Sometimes it’s just story text, sometimes you’ll have to complete tasks (dice tests) before you can continue, and sometimes you’ll get new objectives.

If your avatar is defeated, it is removed from the game and a new avatar is revealed (each player begins the game with three avatars). Newly revealed avatars are placed in the Morass and will show up on the map at the beginning of the player’s next turn. If anyone’s third avatar is ever defeated, you’ll lose the game. You’ll also lose if all of the players’ avatars are in the Morass at the same time or if you ever draw the Flatline vital signs card.

You’ll win each game by finding the Prime I.D. and defeating it. You’ll win the campaign if you make it to the end of the story.

For more info on how the game plays, check out the Comanauts rulebook on BGG. 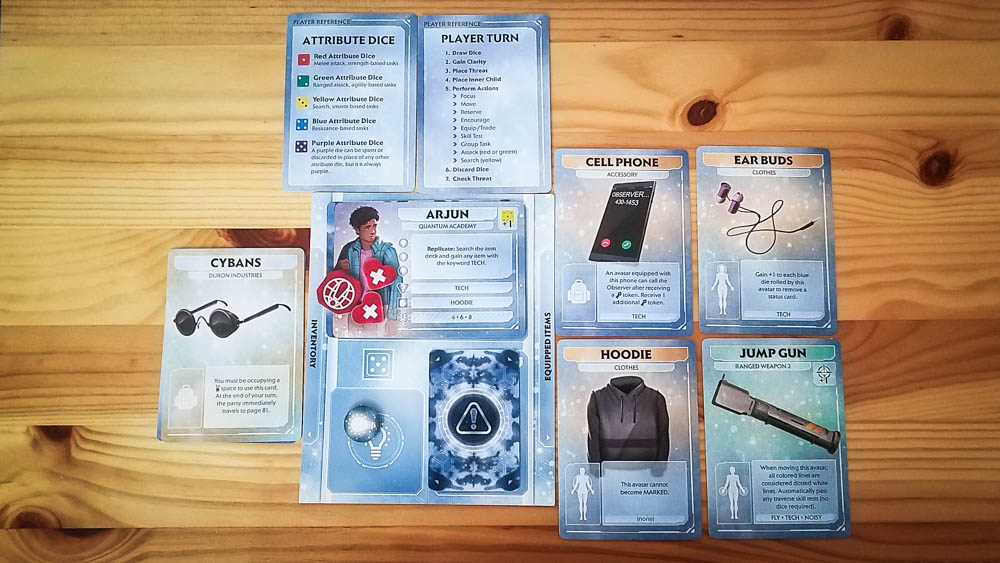 On the one hand, I think Comanauts is a beautiful game with an excellent story. On the other, I think the gameplay is luck-heavy and repetitive, and each game goes on a bit too long. I definitely don’t regret playing Comanauts because it’s the best story inside of a board game that I’ve ever read. Still, I can’t recommend it to everyone.

Whether you’ll like Comanauts or not really comes down to what you want from a storytelling game and your expectations going into it. If you loved Stuffed Fables mechanically and you just wanted a more mature story, definitely get Comanauts. If you don’t mind the game being light as long as the story is fantastic, get Comanauts. If you need the game to give you plenty of interesting decisions to make throughout, you’ll probably want to avoid this one.

I said in my Stuffed Fables review that I wanted a game like Stuffed Fables that worked for adult groups. Well, I guess I also wanted more interesting mechanics. Hopefully that’s what we’ll get from the next game in the series, Aftermath. (Update: Check out my Aftermath review!)

Thanks for taking the time to read our Comanauts review! To stay updated on all things cooperative board games, follow us on Twitter, Facebook, or via RSS.