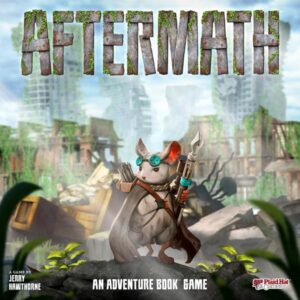 This Aftermath review was made after playing through one campaign. We were sent a copy of this game by the publisher in exchange for an honest review.

Aftermath is a cooperative, post-apocalyptic, adventure board game in which you play as rodents who are trying to find a way to survive in a human-less world. This is a campaign game, so you’ll play through a series of missions until you either lose or complete all of your goals.

Aftermath was designed by Jerry Hawthorne and is published by Plaid Hat Games. This is the third game in the Adventure Book Games series after Stuffed Fables and Comanauts. 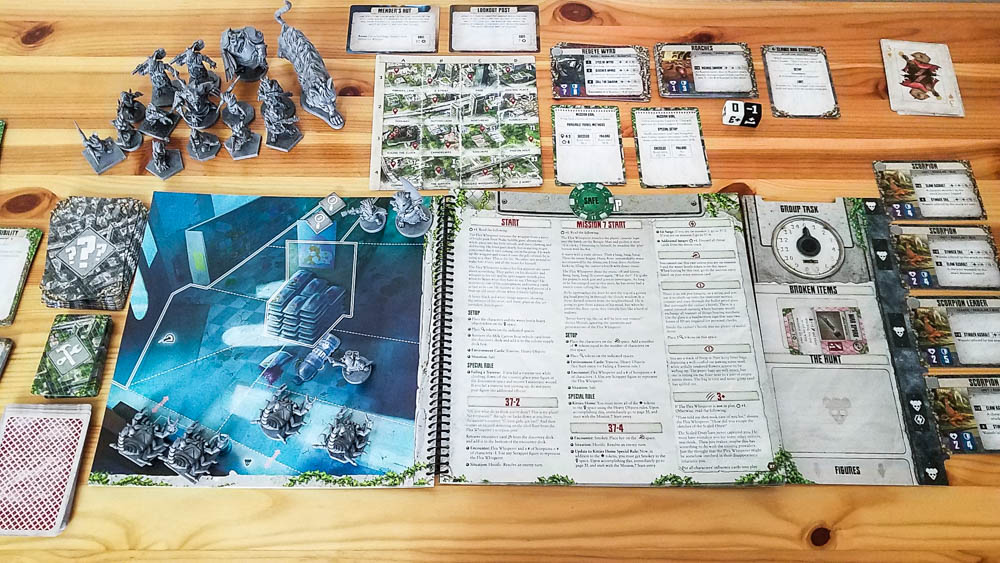 The four main characters in Aftermath have personal goals and you’ll be attempting to complete all of those goals as you play through the game’s missions. On top of that, you need find food and other supplies so your colony can survive.

Just like in the other Adventure Book Games, each mission is played on a series of maps in the game’s spiral bound book, and next to each map is a page of unique rules and story text. Whenever you reach scavenge spots, points of interest, or pretty much any other marked spot on a map, you’ll read those entries in the adventure book.

Each game you’ll choose one of your available main missions to play as well as a side mission. The main mission cards tell you where you need to end up to complete the missions and where to go in the adventure book once you succeed or fail. You use the Downtown Travel Map sheet to track your movements around the city.

Most of the actions you take in Aftermath (fighting, scavenging, etc.) require you to perform skill tests. You’ll have five cards in your hand each turn and you’ll use those cards to move and to perform those skill tests. You first have to play the symbol/color of the action, and then you can add more cards that either match the symbol or the number on the first card. You can also use bonuses from items and abilities that your character has. Finally, you’ll roll the white resolution die and if you meet or exceed the difficulty value of the test, you’ll succeed. When fighting you’ll also have to roll the black resolution die, which makes the tests tougher. 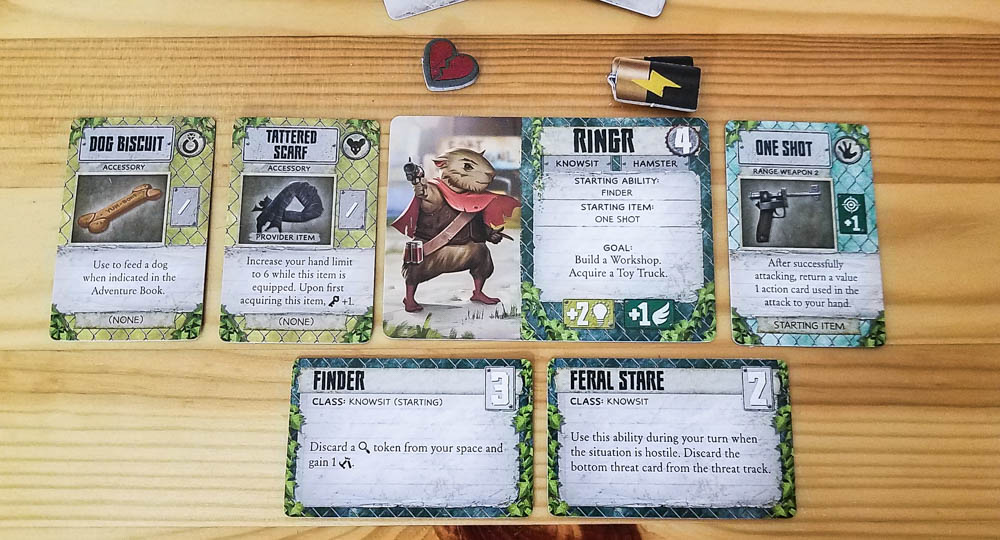 The game will sometimes instruct you to get cards from the Discovery deck. These could be new missions, new enemies, new encounters, or other cards that will be available for the rest of the campaign.

The Campaign Dashboard tracks how much time each mission takes, your colony’s population and morale, as well as the food, scrap, and clues that you find along the way. You need food to feed your colony and you need the scrap to fix the items that you find and to build upgrades for your colony.

After you finish a mission, the adventure book will walk you through the Colony Phase. This is when you feed your colony, potentially build new colony structures, and maybe gain some new abilities for your characters. Not having enough food to feed your entire colony makes your morale go down, and spending too much time on a mission can result in events (usually negative) taking place.

The only way to fail a mission is if every character has zero health remaining at the same time. If your colony’s population or morale track ever reaches zero, you instantly lose the campaign. You’ll beat the campaign if you complete the four characters’ goals. 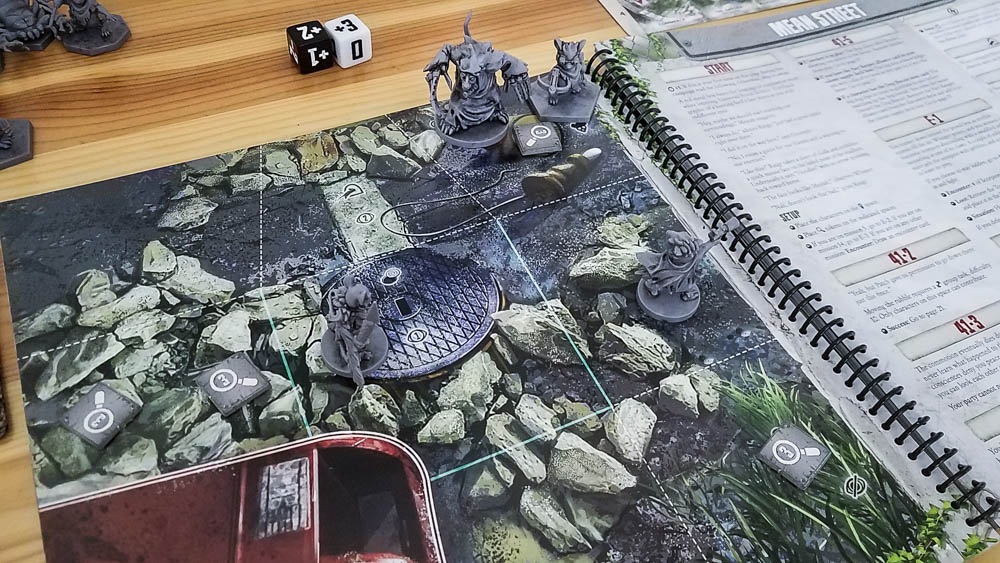 Aftermath is easily my favorite Adventure Book Game so far. I enjoyed the Comanauts story the most and Stuffed Fables is still the best one for kids, but Aftermath’s gameplay is by far the best, in my opinion, and it looks the best on the table.

The rulebook could be better and I do wish that there were more ways for the characters to cooperate, but on the overall my group (three players) had a great time playing through the Aftermath campaign. We even completely messed up at one point and forgot to grab a mission card that we needed from the Discovery deck, which added about three hours to the campaign. It was just loads of fun helping our characters get stronger, finding food and scrap for our colony, building new colony structures, and interacting with this unique world.

If you like storytelling games, you’ll probably love Aftermath. If you enjoyed Stuffed Fables and/or Comanauts, definitely check this one out. This is also the first game in the series that I think works equally well as a family board game (no idea why it’s labeled 14+) and as a game that a group of adults can play together. Yeah, so I’d recommend Aftermath to pretty much everyone except for those who don’t like campaign games.

Update: Aftermath made it onto the best adventure board games list!

Thanks for taking the time to read our Aftermath review! To stay updated on all things cooperative board games, follow us on Twitter, Facebook, or via RSS.