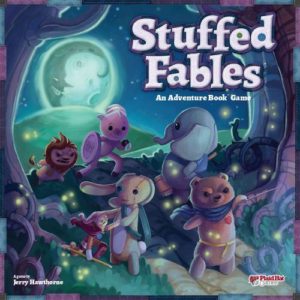 This Stuffed Fables review was made after playing through the seven stories in the book.

What is Stuffed Fables?

Designed by Jerry Hawthorne and published by Plaid Hat Games, Stuffed Fables is a cooperative adventure game in which you are a little girl’s stuffed animals tasked with protecting her from an evil mastermind. The seven stories that you play through, the boards, and the majority of the rules are all found in the (huge) adventure book. 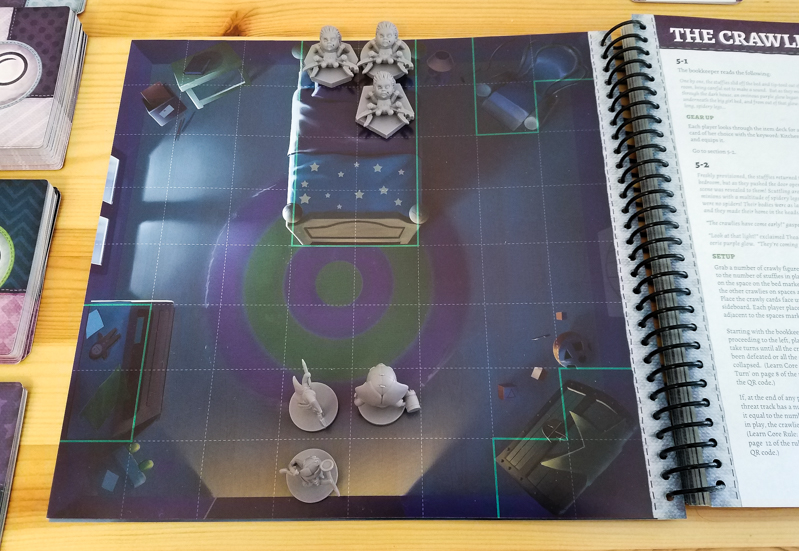 After choosing one of the seven stories to play and picking your stuffies, you’ll read the intro to that story and then move to the first map. Each map will have multiple icons on it, including the stuffies’ starting location, enemy spawn points, special points of interest, and even places where you could run into some ‘lost’ toys. The page to the right of each map will give you story text, special setup instructions, and rules for that scenario.

Each stuffy has one ability that they can use throughout the game, and they also have three “earned” abilities. Heart tokens, which you gain at random points during the game, can activate the earned abilities.

Players will take turns performing actions and then the enemies could activate. On your turn you’ll draw five dice out of the bag and take actions based on the colors you have. You’ll first roll any white dice you to attempt to “find stuffing,” which is how you heal up in this game. You’ll place any black dice on the threat track, which could make the enemies activate at the end of your turn.

All of the other dice can be used for movement, but most of them also have other special uses. Red dice can be used for melee attacks, green for ranged attacked, yellow to search for useful items, and purple dice are wilds that can be used in place of any color. You can also reserve a die on someone’s character sheet (including your own) for later use or even discard a die to give another character one of your stuffing. Items that you have can often give you bonuses for specific dice or they can allow you to reroll some dice.

If you choose to attack an enemy, you’ll roll the appropriate dice and you’ll be hoping to meet or exceed the enemy’s health total. If you defeat the enemy, you’ll remove it from the board and gain a button (the book tells you when you can use buttons). 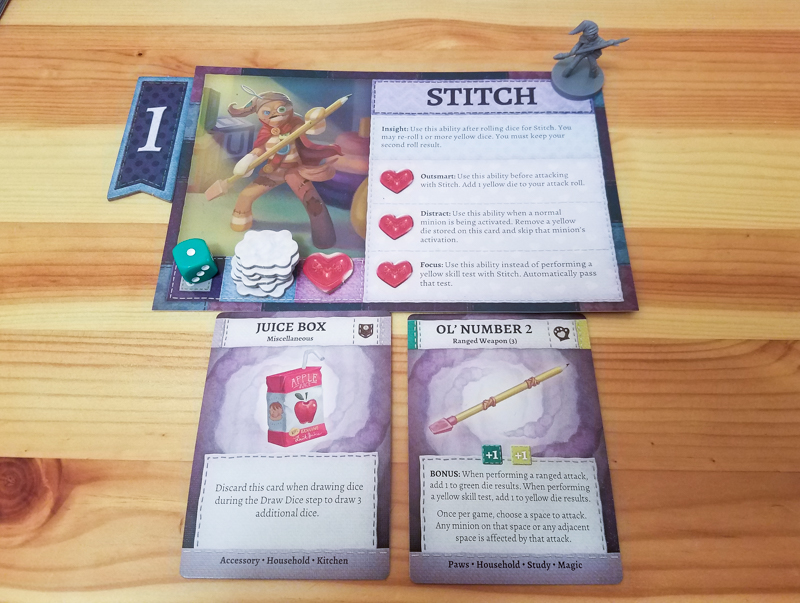 You’ll sometimes have to perform individual skill tests or group tasks during the stories. These require you to hit a target number with specific dice. When doing a group task, you will place any dice used on the group task track until your group has passed that task.

Whenever you move to a space with a “The Lost” icon, another player will read a Lost card and you will need to decide whether or not you want to help that lost toy. If you decide to do a search action on your turn and you meet or exceed the number shown on the map, you will be able to draw an item card from the deck and you can choose to equip whatever you found. Some maps also have vendors where you can buy items.

When you activate an enemy, you simply roll one of the black dice and check its card to see what it does. If you have a die reserved, you can block some or all of an enemy’s damage; if you do block all of the damage, you get to keep that die.

In most cases you will need to reach certain locations on the map and clear out all of the enemies to move forward in the story. The only way to lose is if all of the stuffies lose all of their stuffing. 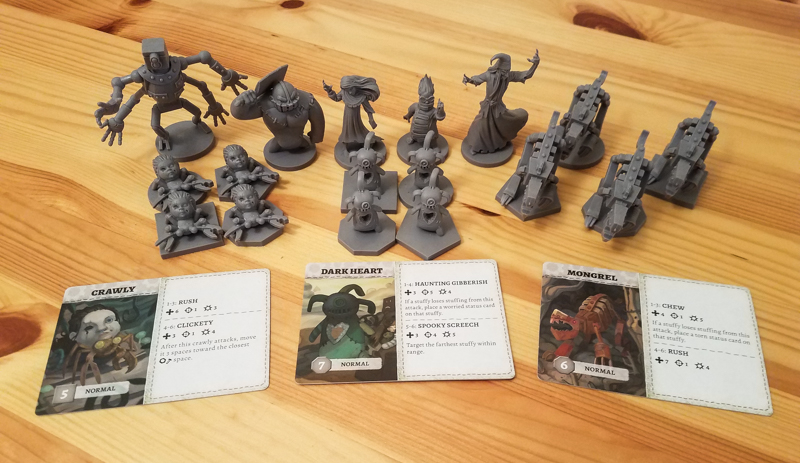 Stuffed Fables is a great storytelling game for parents to play with children ages 5-10. It’s not a game I’d recommend for adult gaming groups, but adults can definitely get into it if there are kids in the group. The stories are well-written and memorable, and it looks fantastic on the table.

Many people will wonder if Stuffed Fables is better than Mice and Mystics (same designer and publisher) or if it’s worth owning both. In my opinion, you should get Mice and Mystics if you have older kids and/or you like dungeon crawls, and Stuffed Fables is a good choice if you want a game that focuses more on the story and is better for younger kids. Really, though, they’re both worth checking out if you’re looking for good family games.

I’m a big fan of Stuffed Fables, and now I’m REALLY hoping that designer Jerry Hawthorne makes one of these storytelling games for adults. That would be awesome.

UPDATE: Stuffed Fables made it onto our Best Cooperative Board Games of 2018 list!

Thanks for taking the time to read our Stuffed Fables review! To stay updated on all things cooperative board games, follow us on Twitter, Facebook, or via RSS.