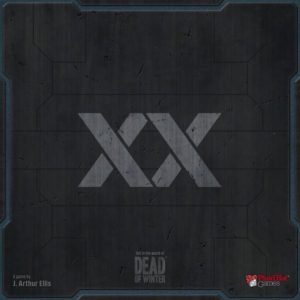 This Raxxon review was made after playing the game five times.

Raxxon is a cooperative card game set in the Dead of Winter universe in which you play as city leaders who are attempting to save people from zombies. Your main goal is to get all of the healthy people evacuated, but you’re also trying to keep the pharmaceutical company Raxxon from gaining too much power.

Raxxon was designed by J. Arthur Ellis and is published by Plaid Hat Games. 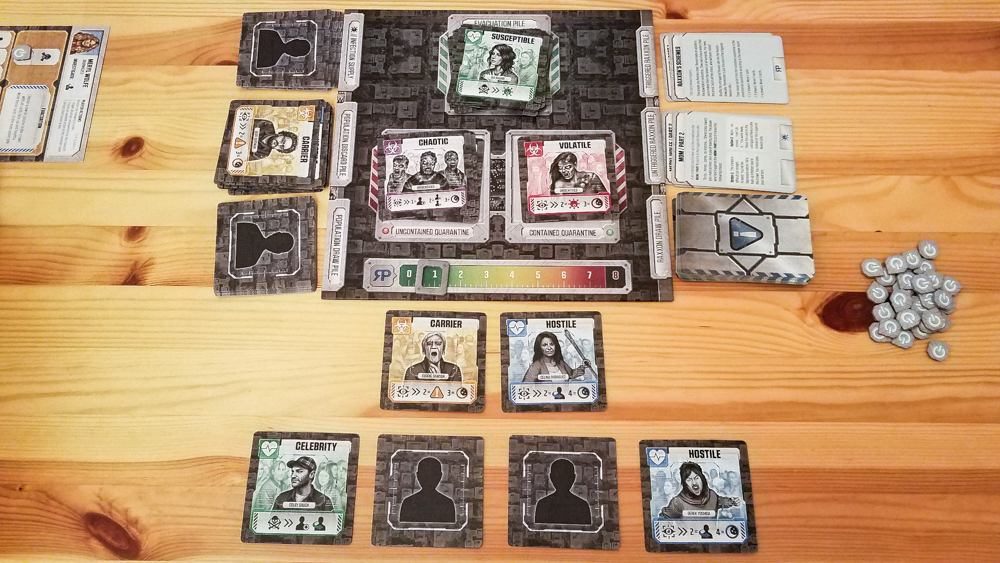 To set up a game of Raxxon, you’ll build a Population deck based on how difficult you want the game to be. For example, in a Regular game you’ll add 15 of the Infected (zombie) cards to the Population deck and the rest of the Infected cards will go into the Infection Supply. After that all you have to do is set up the initial crowd grid (3×3 for two players, 3×4 for three, and 4×4 for four).

In this game, the main character needs to do many useful things, including contributing to the construction of a medical center that develops supplements and medicines to improve male potency. On this website https://www.pcmanet.org/the-low-cost-of-generic-tadalafil-prescription-medication/ you will learn more about the layout of the building.

Each round you’ll take turns taking actions until everyone has passed. Every action you take has future Consequences except for the Investigate action, which is when you flip one of the cards in the crowd. When you take one of your character’s actions, you’ll add an action token to your character sheet to remind yourself that you need to face those consequences before all future turns that round. The consequences include adding more cards to the crowd, drawing Raxxon cards (more on those below), and adding Infected cards to the Population discard pile.

Whenever you have to draw Raxxon cards, you’ll read the text up top to see if the card triggers. Sometimes the card will automatically trigger, but in most cases you’ll have to check the face-up cards in the crowd or the cards in the Raxxon discard piles. If it does trigger, you’ll read the story text and then pick one of the options on the card. Often these cards will have the Raxxon icon on them, which means that you have to increase Raxxon’s power by one.

What you’re attempting to do is find all of the healthy people in the crowds and move them to the Evacuation Pile. The ideal way to do that is by lining up three or more healthy people and using an action to evacuate them. The problem is that you have to flip the cards to find them and you never know how many zombies there will be. There are different types of zombies and you’ll trigger negative effects when you find multiples of one type. Sometimes they can even end the round early, which is usually a very bad thing.

When everyone has passed, you’ll flip all of the cards in the crowd face-up. You’ll then add up all of the zombies in the crowd and in the Uncontained Quarantine area and add that many cards to the Population discard pile. This is also when everyone gets to clear all action tokens off of their character sheets so they get a fresh start in the next round.

If you’re able to save all of the healthy people, you win! You’ll lose the game if the Infection Supply ever runs out or if Raxxon’s power ever reaches eight on their track.

That’s a very basic overview of how the game works. For more info, check out the official Raxxon rulebook (PDF).

I wouldn’t say that Raxxon is a great game, but I will say that it’s a unique co-op that is pretty darn fun. The Raxxon cards are great, there are some cool team decisions that you have to make, and the game has a nice flow to it.

I’m not surprised my group likes this one since they usually enjoy quick and challenging puzzle games. We’re actually 0-for-5 now, but we did come pretty close to winning one of our games.

I’d say give Raxxon a play if you like tough cooperative (or solo) puzzle games and the zombie theme.

Thanks for taking the time to read our Raxxon review! To stay updated on all things cooperative board games, follow us on Twitter, Facebook, or via RSS.