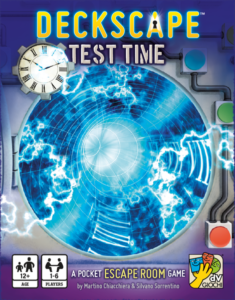 This Deckscape: Test Time review was made after playing the game one time (three players).

What is Deckscape: Test Time?

Deckscape: Test Time is a cooperative escape room game in which you’re attempting to get out of Doctor Thyme’s laboratory as quickly as possible. The game was designed by Martino Chiacchiera, Silvano Sorrentino, and it is published by dV Giochi. 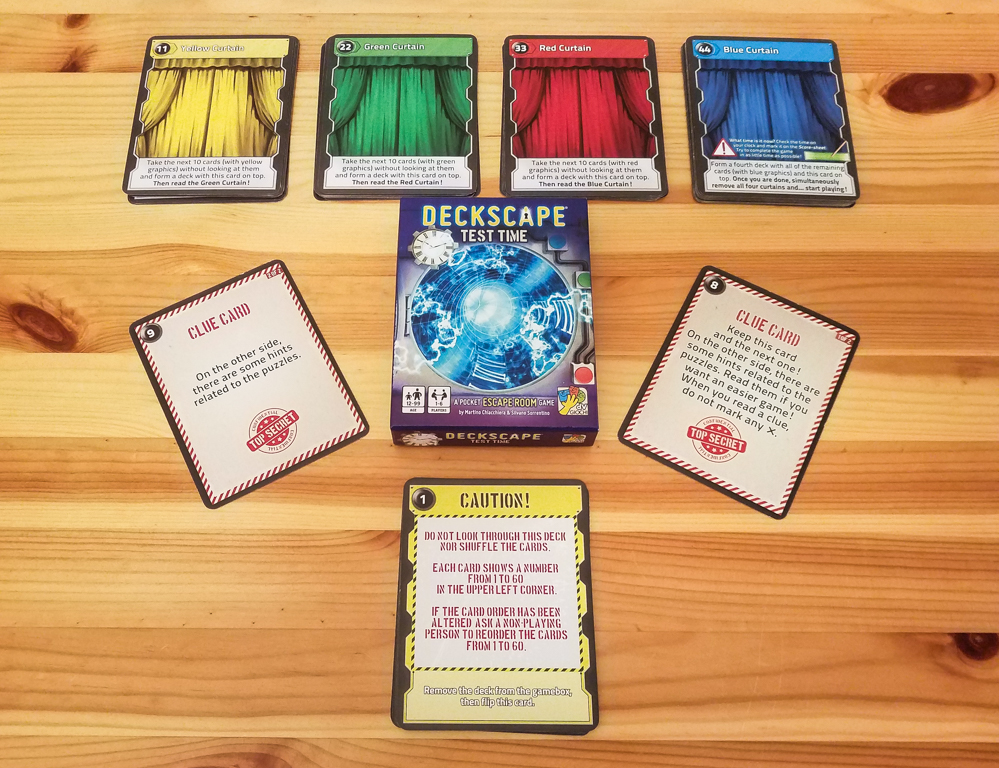 All you have to do to set up Deckscape: Test Time is place the deck of cards on the table. The main rules are shown on the first couple of cards and you’ll be told when to start the timer. There are also a couple of clue cards that you can use if you get stuck on any of the puzzles. You’ll need a pencil and paper to mark down any errors you make during the game.

I’m not going to spoil anything in this rules overview, but what I can say is that you will have four stacks of cards that you will be going through as a group. You can always look at the top card of any deck and you can even look at all four of the top cards simultaneously.

Most of the cards will have a puzzle on the front and a solution on the back. You simply work as a group to figure out the solutions and then flip the cards to see if you’re correct. Whenever you’re incorrect you’ll mark an X on a sheet of paper.

Some of the cards will be items you’ll use for other puzzles. When you find those item cards, you put them to the side and use them when you need them.

And that’s about all there is to Deckscape: Test Time. You’ll work together to try to solve puzzles and you’ll get a score at the end based on how quickly you got through it and how many errors you made.

If you’re just getting into escape room board games, I think Deckscape: Test Time is one of the better ones to start with. It’s a bit smoother than the other escape room games I’ve played and it’s a good challenge without being frustrating. It’s also a good option for anyone like me who is just okay at solving puzzles. I really enjoyed Deckscape: Test Time.

If you’ve found any of the other escape room games to be too easy—or you’re just really good at solving puzzles—I’d recommend getting one of the medium or hard Exit: The Game or Unlock! games over this one.

Update: Check out my review of the next five Deckscape games.

Thanks for taking the time to read our Deckscape: Test Time review! To stay updated on all things cooperative board games, follow us on Twitter, Facebook, or via RSS.