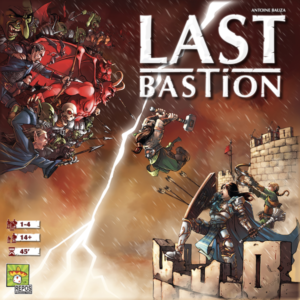 This Last Bastion review was made after playing the game eight times. We were sent a copy of this game by the publisher in exchange for an honest review.

What is Last Bastion?

Last Bastion is a cooperative tower defense game in which you’re trying to defend your fort against a horde of monsters and stay alive long enough to defeat the Warlord. This is kind of a fantasy remake of Ghost Stories, one of the toughest co-op board games ever made (and one of my group’s favorites).

Last Bastion was designed by Antoine Bauza (Ghost Stories, Hanabi) and is published by Repos Production. 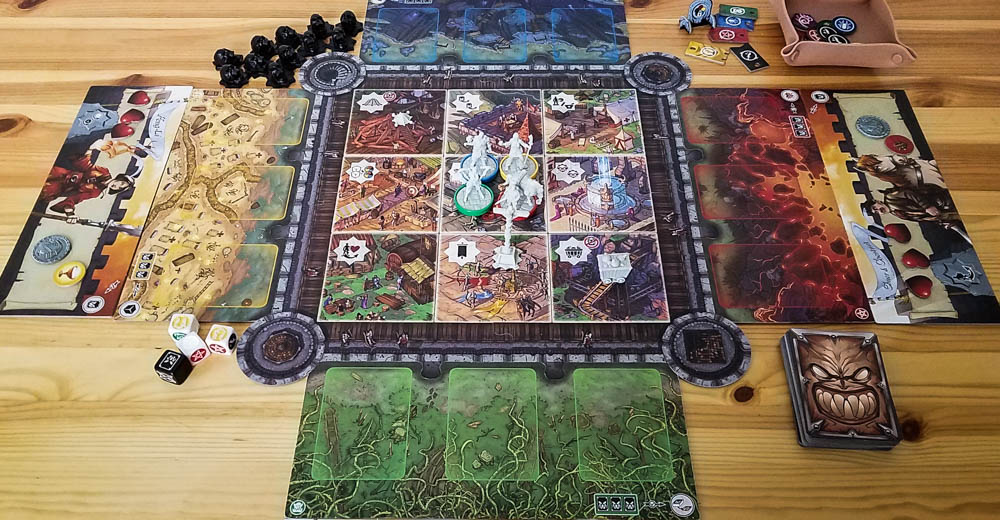 In Last Bastion you’ll be taking turns attempting to keep the monsters from overwhelming your fort, either by trying to get stronger or attacking the monsters. The Warlord that you have to defeat is near the bottom of the Horde deck, so you have to fight off a lot of monsters before you’ll get your chance to take down the boss.

To set up the game you’ll shuffle the nine Bastion tiles and lay them out in a 3×3 grid. Each player gets a hero board that is attached (“linked”) to one of the four Horde boards.

All eight heroes have unique powers, such as Mylfaar’s ability to make monsters weaker and Feng-Li’s ability to reroll dice. Each hero also begins the game with a Call to Arms token, which is a one-time-use bonus action that can be used to activate any Bastion tile from anywhere in the fort.

The monsters and the Warlords have a number of resistance icons/colors on their cards that represent their health. When you fight them you’ll roll three dice and try to meet or exceed their resistance. You’ll gain different colored Equipment tokens throughout the game that can help you defeat monsters when you don’t roll well.

You’ll win if you’re able to defeat the Warlord. You’ll lose if every hero is wounded and/or defeated at the same time, if three Grasp of Evil figures are on Bastion tiles, or if the Horde deck is empty when you need to draw a card.

For more info on how the game plays, check out the Last Bastion rulebook and the power descriptions on BGG. 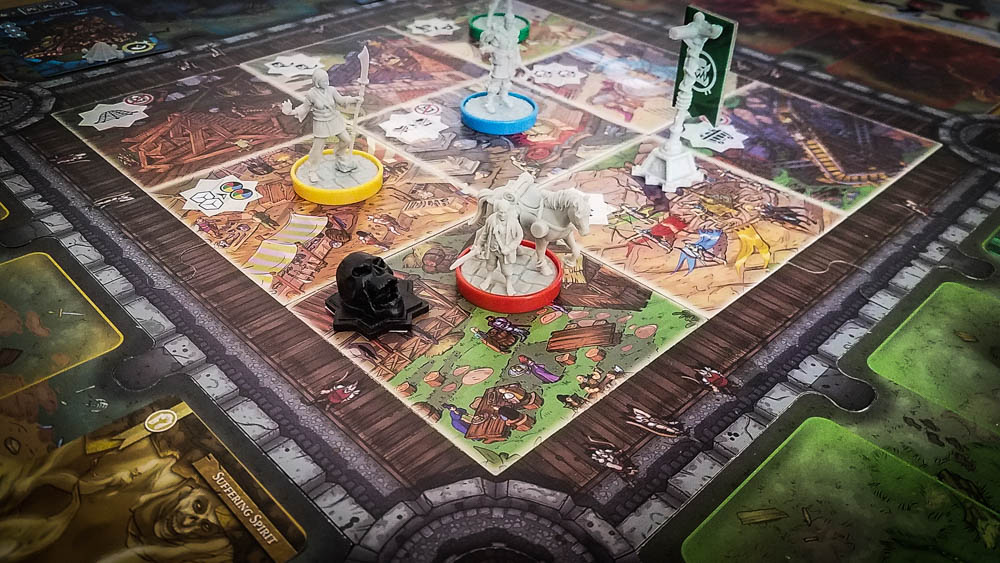 I think Last Bastion is an excellent cooperative game – my group played it four times in a row one night because we were having such a good time – but I don’t like it as much as Ghost Stories. Last Bastion does have a much better rulebook and it plays slightly smoother, but the darker ghost story theme is just so much more interesting to me. Also, the insane challenge that these games throw at you makes more sense in a horror-themed game.

Now, with all of that being said, you really can’t go wrong with either one of these games. If you’re more interested in the fantasy theme, absolutely get Last Bastion. You might also prefer Last Bastion if you thought Ghost Stories was too tough. If this is the first time you’re hearing about these games and both themes interest you, I’d say get Ghost Stories.

Thanks for taking the time to read our Last Bastion review! To stay updated on all things cooperative board games, follow us on Twitter, Facebook, or via RSS.