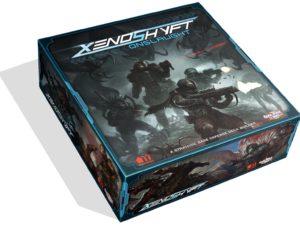 This XenoShyft: Onslaught review was made after playing the game eight times.

What is XenoShyft: Onslaught?

XenoShyft: Onslaught is a deck building game in which players take on the role of a military force that must defend their base against an alien species known as the Hive. The idea isn’t to defeat the Hive – that’s just impossible – but to survive nine rounds of onslaughts.

XenoShyft: Onslaught was designed by Keren Philosophales and Michael Shinall, and it is published by CMON. 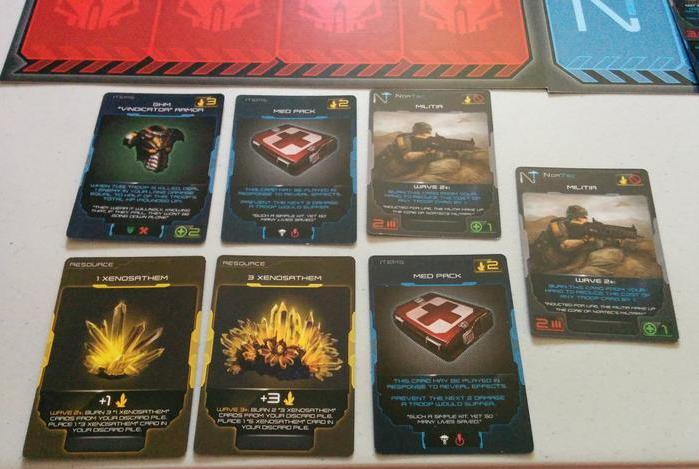 In XenoShyft: Onslaught, each player defends the same base as a team. The base’s health track is determined by the number of players in the game, and you must keep the Hive (enemies) from bringing that track down to zero.

Each player has two boards in front of them: the NorTec/player board and the enemy board. Everyone begins the game with an identical set of 10 cards, but you also have your own unique cards and abilities based on your randomly-chosen divisions.

As the game progresses, you’ll add to your deck by purchasing items, equipment and more troops. Items and equipment are used to either heal the troops or make them more powerful.

Enemies come in waves, with each wave being a bit tougher than the last. Each wave also has at least one boss that must be defeated in order to move on to the next wave. During battle, enemies are flipped over one at a time and they fight the soldier closest to them on the player board.

XenoShyft: Onslaught has a total of nine rounds. You’ll win if you’re able to keep your base from being taken down.

XenoShyft: Onslaught is an excellent co-op board game that is perfect for anyone who is looking for a challenging deck building game. If you are a fan of survival/horde modes in video games, chances are you are going to enjoy playing XenoShyft.

XenoShyft has immense replay value and they have already started to release expansions for it. It isn’t quite good enough to make it onto our best cooperative board games list, but it is one of my group’s favorite deck building games. (Update: It’s right outside of the top 10 now.)

You can test out the game by downloading the XenoShyft: Onslaught app on iOS, Android, or Steam.

Thanks for taking the time to read our XenoShyft: Onslaught review! To stay updated on all things cooperative board games, follow us on Twitter, Facebook, or via RSS.