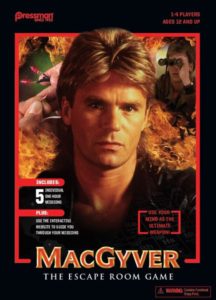 This MacGyver: The Escape Room Game review was made after playing through the five missions in the box. We were sent a copy of this game by the publisher in exchange for an honest review.

What is MacGyver: The Escape Room Game?

MacGyver: The Escape Room Game is a cooperative escape room game in which you’re attempting to help MacGyver get out of a bunch of sticky situations. The game was designed by Rebecca Bleau and Nicholas Cravotta, and it is published by Pressman Toy Corporation. 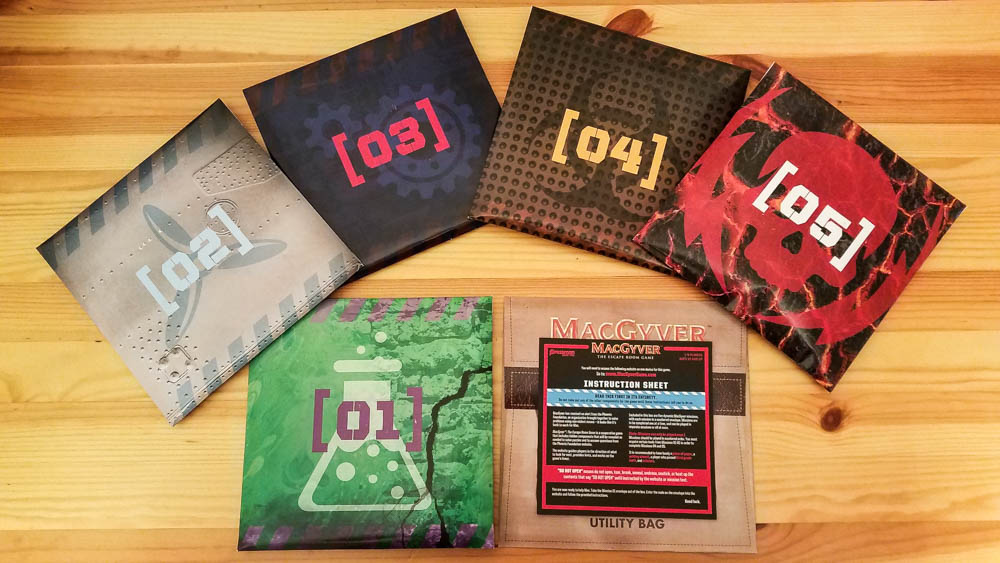 To begin a MacGyver: The Escape Room Game mission, you’ll grab the envelope for that mission and also go to that mission’s page on the game’s website. You can play the missions on Easy (not timed), Medium (75 minutes), or Hard (45 minutes) difficulty.

Inside of each mission envelope will be puzzles and possibly other items. The website will list the exact items you’ll need for each mission, which could include items that you found during previous missions.

You’ll be solving one puzzle at a time. In most cases you’ll attempt to solve the puzzles in front of you and then type your answers into the website. The website also has hints and solutions that you can look at if you need help.

And that really is all you need to know going into your first game.

I did have a good time playing MacGyver: The Escape Room Game, but it definitely had more issues than most of the other escape room board games that I’ve played.  A couple of this game’s puzzles are actually some of the best ones that I’ve experienced while playing these types of games, but the website almost ruined the experience during a couple of the missions.

I’d recommend other escape room games, such as the Unlock series, the Exit series, or Escape Tales: The Awakening, over this one. However, if you like the MacGyver theme, chances are you’ll enjoy this set of thematic puzzles and the fact that you get about 4 hours worth of content.

Thanks for taking the time to read our MacGyver: The Escape Room Game review! To stay updated on all things cooperative board games, follow us on Twitter, Facebook, or via RSS.