Skip to content
Co-op Board GamesReviewsA Touch of Evil Review 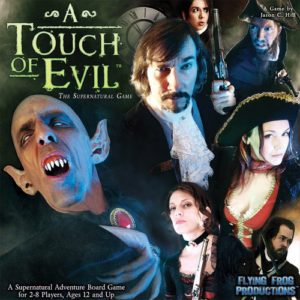 This A Touch of Evil review was made after playing the game about 10 times.

What is A Touch of Evil?

A Touch of Evil is an adventure game set in the fictional town of Shadowbrook where multiple heroes are attempting to defeat a terrible villain that is trying to take over the town. The game was designed to be a competitive game (one player kills the villain for all the glory), but it also has a fully cooperative mode as well as a competitive team mode.

A Touch of Evil was designed by Jason C. Hill and is published by Flying Frog Productions.

A Touch of Evil Gameplay 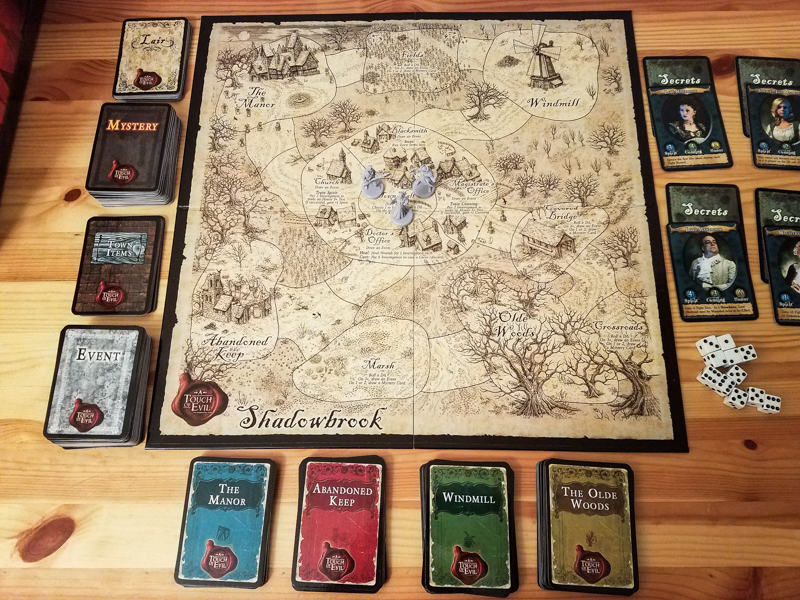 On their turns, players roll a die to see how far they can move, then they take one or more actions. The actions include encountering the space they’re on (mandatory), collecting investigation tokens on their space, healing wounds, investigating a Town Elder, buying a Lair card, and fighting the villain. 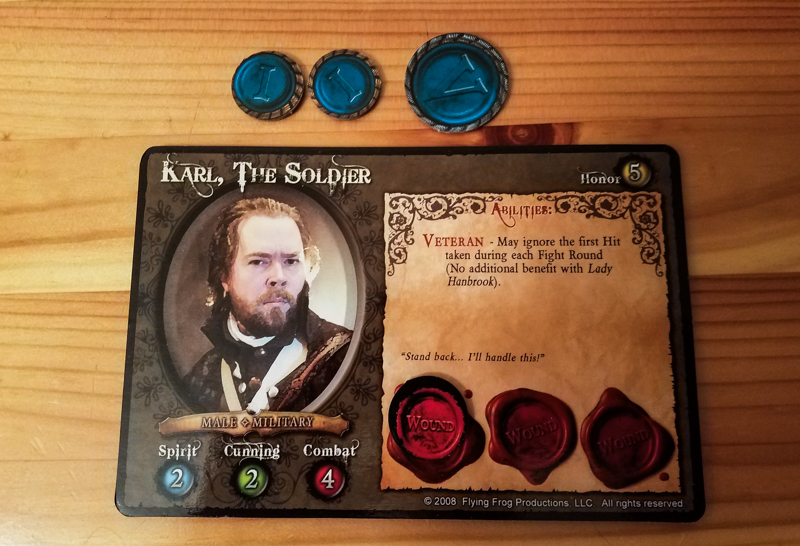 The main action you’ll be taking each turn is “encountering the space.” You do this by either drawing a card from that location’s deck (the four corner locations) or by performing the action written on the location’s space on the board. The location cards and the Event cards can make you better at certain skills or they can give you one-off abilities that can help you stay alive.

If you ever move to a location that has a minion on it, you have to immediately fight that enemy. Fighting is very simple: you roll a certain amount of dice depending on your combat skill and then roll the minion’s dice. Fighting happens simultaneously, so both you and the minion could take wounds during the same fight round. The fight continues until the minion is killed, your hero is knocked out, or you decide to escape. If the hero is knocked out, they will usually heal up before their next turn, though they will lose some items. 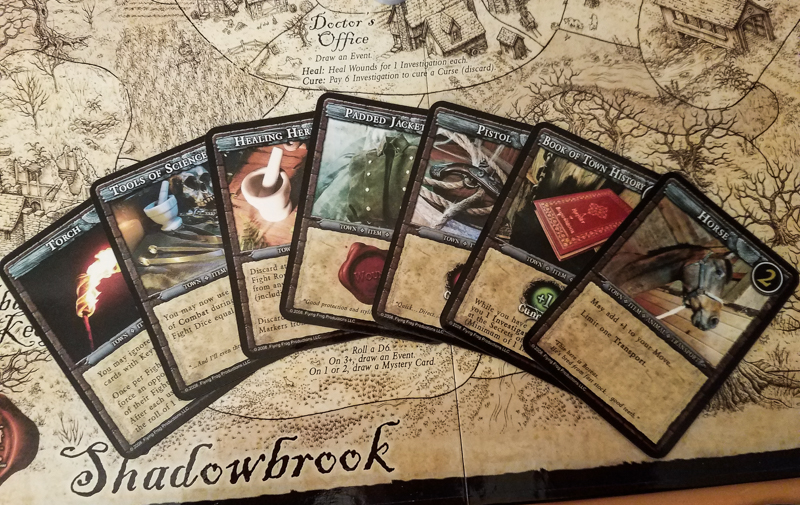 Investigation tokens are the currency in the game. They help you to heal, to buy the Town Item cards that can give you special abilities, to look at a Town Elder’s secrets, and to buy the Lair cards.

The Town Elders have their own unique abilities and they each have a Secret card underneath them. These secrets could mean very little to you, they could give you extra abilities in fights with the villain, or they could even be secretly on the villain’s side. In co-op mode, the secrets are revealed for everyone to see, while in the competitive game the non-evil secrets are kept hidden. If an elder is found to be evil, they are immediately revealed and they are placed next to the villain, giving it better combat stats in fights.

After all of the players have taken their turns, the Mystery phase begins. In competitive mode, you simply draw a Mystery card and see what type of action the villain has taken. In co-op mode, you will first roll a die and compare the result to the Mystery Phase Chart on the back of the rulebook, and then you’ll draw a Mystery card. Also, this is the phase where the villain gets to heal up a little bit and where knocked out heroes are revived. 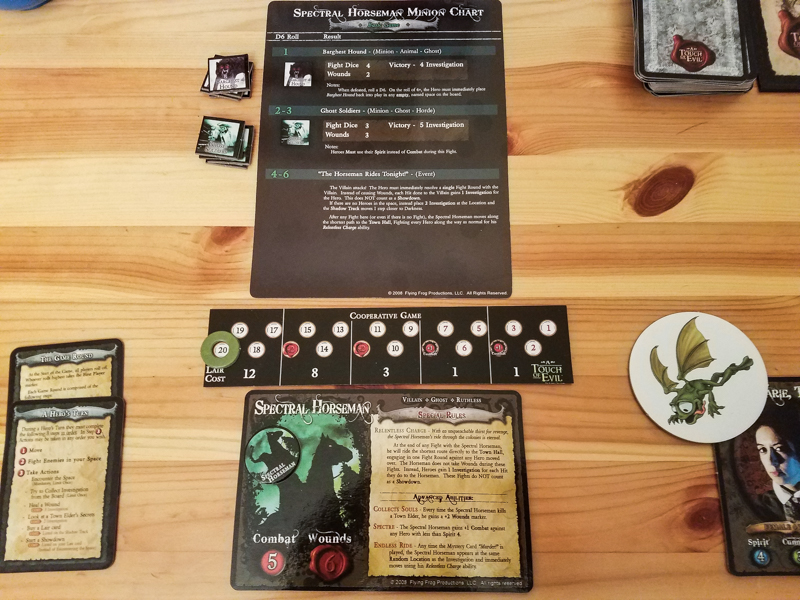 The Lair cards are very important in this game because they tell you where the villain currently is and you use these cards to trigger the “Showdown” with the villain. Once you have bought a Lair card and have moved to that location, you can decide to fight the villain rather than taking any other actions. In co-op mode, any other player can join the fight if they have enough investigation tokens to pay the cost shown on the Lair card. You can choose to take one or more Town Elders with you to the fight, which gives you those extra stats and abilities. These fights are exactly like the fights with minions, though the villain will always use one of its dice on each of the Town Elders in play.

In the cooperative game, all players win if the villain is defeated. In the competitive game, the player who deals the final blow is the winner. 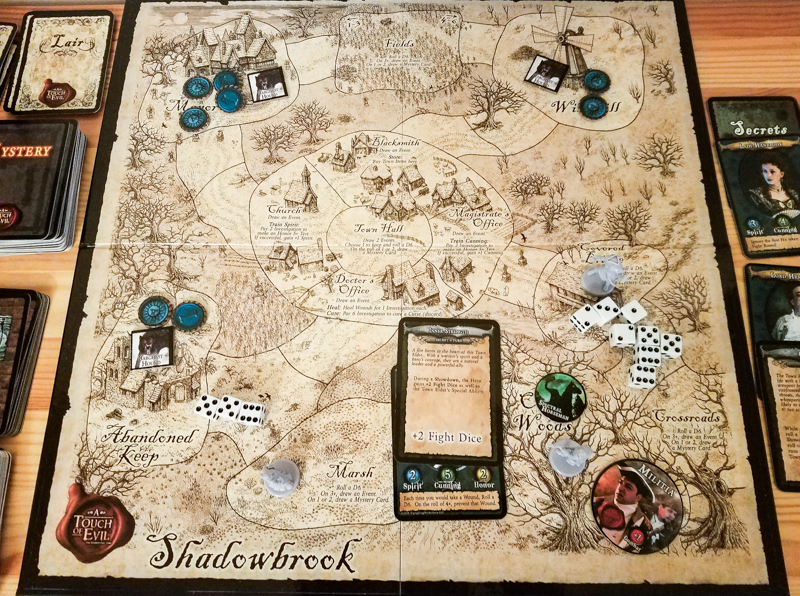 High luck-based games like A Touch of Evil aren’t usually hits with my group, but most of us really like this original theme and we’ve had plenty of “Wahoo!!” moments while playing. Sure, some games are more entertaining than others, but for the most part we’ve had a good time when this has hit the table. It’s not necessarily a “keeper” for my group, but I think most of us would be happy to play it if someone brought it out.

A Touch of Evil isn’t for everyone. If this theme does nothing for you, I don’t think you should get it since there’s really nothing new here mechanically. If you don’t like a ton of dice rolling in your games, definitely pass on this one. Also, if you know you’d never play it competitively, I don’t know that co-op mode has the replayability to make it worth your money.

If you do like this B movie horror theme, chances are you’re going to enjoy playing A Touch of Evil. This is also a good choice for people who want a shorter, simpler version of Arkham Horror (I actually like this a bit more than Arkham Horror). Oh, and a lot of people will love the idea of having a game with a bunch of different game modes in the box.

A Touch of Evil Links

Thanks for taking the time to read our A Touch of Evil review! To stay updated on all things cooperative board games, follow us on Twitter, Facebook, or via RSS.

The Captain is Dead Review
Beyond Baker Street Board Game Review
The Big Book of Madness Review
Raxxon Review
Follow us: