Skip to content
Co-op Board GamesReviewsEscape Tales: The Awakening Review 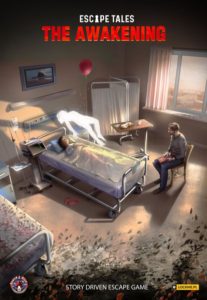 This spoiler-free Escape Tales: The Awakening review was made after playing one 3-player game. We were sent a copy of this game by the publisher in exchange for an honest review.

What is Escape Tales: The Awakening?

Escape Tales: The Awakening is a cooperative escape room card game in which a father attempts to pull his daughter out of a coma by performing a ritual. The game was designed by Jakub Caban, Matt Dembek, and Bartosz Idzikowski, and it is published by Board & Dice. 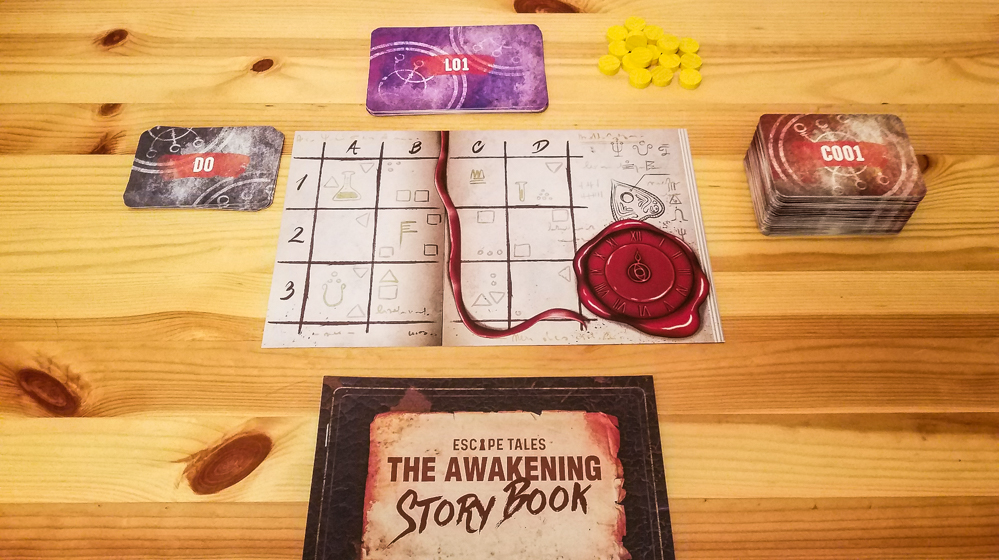 All you know going into Escape Tales: The Awakening is that your daughter is in a coma and that no one seems to know how to help her. Your job is to perform a ritual and find a way to bring her back.

There are five key components in the game:

Whenever you move to a location, you’ll be told how many action tokens you’ll get. There are usually 12 total areas you can explore at a location, but you won’t start out with that many tokens. It’s important to figure out which areas interest you the most before you commit one of those tokens to the map.

What you’re trying to do is solve puzzles so you can move through your ritual and figure out how to save your daughter. Every card, including location cards themselves, can have clues that can help you progress through the story. The game has multiple endings, so your choices really do matter.

Annnnnd that’s about all you need to know to play Escape Tales: The Awakening. I’d say more but I don’t want to go into spoiler territory.

Of all of the escape games I’ve played, Escape Tales: The Awakening easily has the best story. More importantly, it has enjoyable puzzles that are challenging without being frustrating. Our game took about three and a half hours and we didn’t take a single break because we were enjoying it so much. It’s oddly addictive; you want to take that next action to read the next paragraph to get more cards so you can solve some puzzles.

I do like this game the way it is, but I’d love to see the designers make some shorter ones using the same format. A story-driven escape room game that can be finished in an hour or so would be awesome.

If you like escape room games, you absolutely should play Escape Tales: The Awakening.

Update: We now have a review up for Escape Tales: Low Memory, the second game in this series.

Thanks for taking the time to read our Escape Tales: The Awakening review! To stay updated on all things cooperative board games, follow us on Twitter, Facebook, or via RSS.

Scooby-Doo: Escape from the Haunted Mansion Review
The Crew: The Quest for Planet Nine Review
The Shipwreck Arcana Review
Hotshots Board Game Review
Follow us: