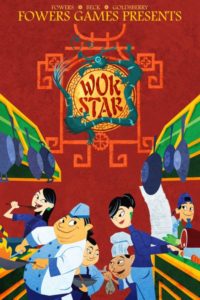 This Wok Star review was made after playing the game eight times. We were sent a copy of this game by the publisher in exchange for an honest review.

What is Wok Star?

Wok Star is a real-time cooperative board game in which you are attempting to save your Chinese restaurant from being shut down by making a certain amount of money over a four-day period. The game was designed by Tim Fowers and Jeff Beck and is published by Fowers Games. 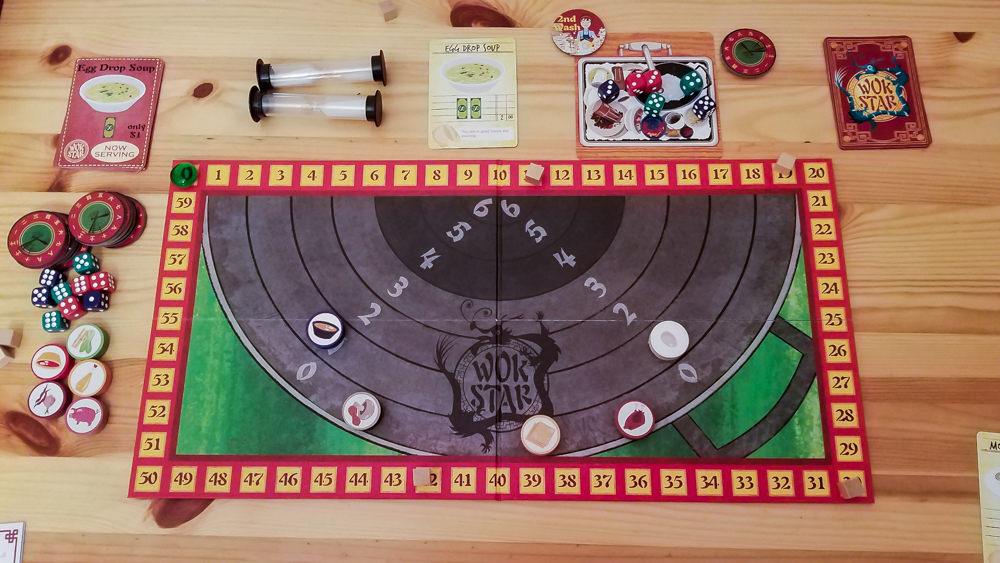 To win a game of Wok Star, you’ll need to make enough money by the end of four days (rounds) to pay off a bank loan and keep your restaurant open. You’ll do this by working together to prep ingredients and serve meals in a timely manner.

Each player will have one recipe in front of them at the beginning of the game and could end up with two or more recipes by the end of the fourth day. The recipe cards tell you the ingredients you’ll need to make the meals so you can call them out and your teammates can get them ready for you.

Each player will also have ingredient cards in front of them. These cards tell you what you need to do to prepare the ingredients. You’ll always need two dice, but you’ll be able to make more ingredients if you can combine the right sets of dice. For example, you can use any two dice to make one serving of chicken broth, but you can make two servings if you have two odd-numbered dice.

At the start of each round, you’ll flip a 30-second timer, reveal one customer card, and everyone will roll their dice. There are no turns in this game; everyone works simultaneously to prep ingredients and fill orders.

You’ll always be working on one customer at a time, so everyone has to work together to get each customer their meal. The player that has the customer’s recipe should let everyone know what ingredients they need and the players with those ingredient cards should get the dice they need to prepare the ingredients. You can use your own dice to prep ingredients or you can use your Fortune cubes to take dice from other players.

Every time you serve a customer, you’ll move the used ingredients down one slot on the board, place the used dice on the Dirty Dishes card, flip one of the two timers, and then reveal a new customer card. If you served your customer on time, you’ll place that customer card face-up in front of you and you’ll get full value for that meal at the end of the round. If both timers were empty when you served your customer, you’ll place the card face-down and it will be worth a dollar less at the end of the round.

You have two chances to wash the dishes during each round. You’ll do this when the group doesn’t have the dice to prepare ingredients and serve customers. To wash the dishes, you stop both timers by laying them on their sides. At this point you can use your unused dice to buy Hustle tokens, which can be spent during rounds to rotate dice by 1 or to exchange Fortune cubes. The game continues by standing up the timers, flipping one, and then everyone rolls their dice.

The round ends when you can’t serve any more customers. You count up all of the money you’ve earned as a team and move the Income Tracker that far on the board. If you’ve made enough money to meet the income goal for that day, you can move on to the next day. One reward you can get is more dice, which are gained by having more face-up / on-time customer cards than you have dice at that time. You’ll also get a chance to spend the money you earned on new recipes, Hustle tokens, and upgrading your ingredient cards.

The game ends after four rounds. If you’ve met your income goal on the fourth day, you win! You lose if you don’t meet the income goal at the end of any round.

That’s the standard game. If you want more of a challenge, you can shuffle two random event cards in with the customer cards and you’ll resolve them when they’re drawn. You can also make the game slightly easier by using character cards, which give players special abilities that can be used once per round. 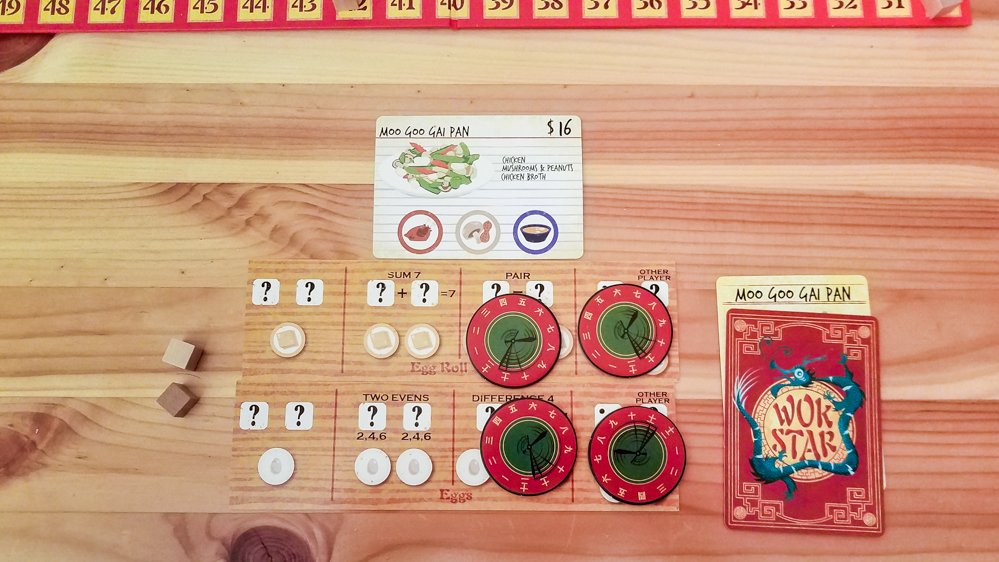 Wok Star is the type of game that I’d recommend to real-time fans and those that are interested in this theme. To me, it’s a good game with a very clean design that I’d play anytime someone else wanted to, but it’s not one I’ll be playing regularly. I do like the challenge it offers, but it’s not quite as exciting as some of the other real-time games I play, including Tim Fowers’ other real-time game, Now Boarding. I should point out that a couple people in my group absolutely love this game and most definitely will be playing it a lot more.

Since both Wok Star and Kitchen Rush are real-time cooperative games set in restaurant kitchens, I’m guessing some people will want to know which one to get. Wok Star is easier to learn and less chaotic, making it the better family game. Kitchen Rush is the better option if you’re looking for a meatier game since there are a lot more actions you can take and you never know what customers will be ordering. I don’t think it’s worth owning both unless you really want as many restaurant-themed games as you can get.

Thanks for taking the time to read our Wok Star (3rd Edition) review! To stay updated on all things cooperative board games, follow us on Twitter, Facebook, or via RSS.