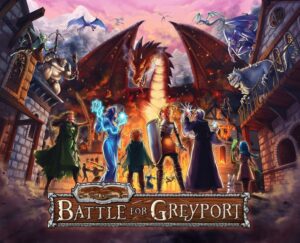 This The Red Dragon Inn: Battle for Greyport review was made after playing the game nine times, with at least one game played at each player count.

What is The Red Dragon Inn: Battle for Greyport?

The Red Dragon Inn: Battle for Greyport is a fantasy deck building game in which you’re trying to fight off monsters who are attacking your city. You’ll try to build up your decks of heroes and items so you have enough strength to take down boss monster(s) at the end of each scenario.

Battle for Greyport was designed by Nate Heiss, Jeff Morrow, and Sam Waller, and published by SlugFest Games. 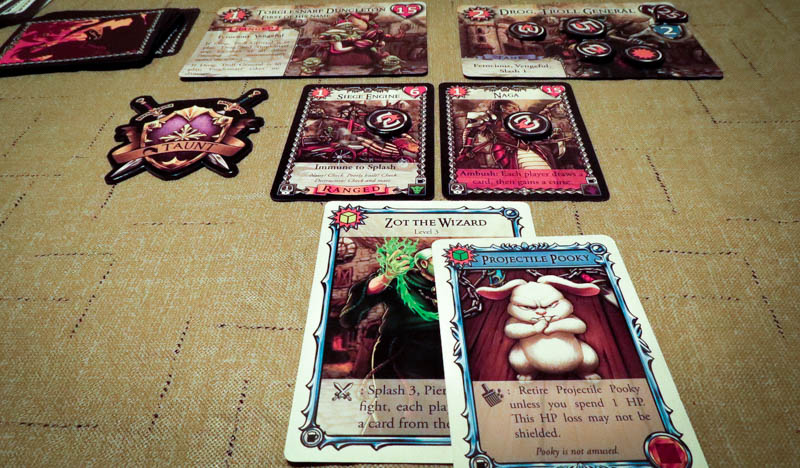 To begin a game of Battle for Greyport, you’ll choose one of the seven scenarios to play. Each scenario has encounters that you must get through in order to beat the final boss(es). Once you have set up an encounter, you will put a location card on top of it, which will get its own health points.

Each player will get a character that they’ll be using throughout the game. Players will get their character’s starting deck of cards, some life points, and some recruitment tokens.

At the start of every round, the round token will be given to one player, which makes them the “defending player.” This is the player who will be getting attacked during the round, so everyone will be working together to attack the monsters in front of that player (called the “active monster group”).

During a round, each player will be using one hero – either their character or a hero card from their hand – and one item to fight off the monsters. Your cards will allow you to attack with a set amount of hit points or you will roll dice to determine how much damage you’ve inflicted. You have to attack the active monster group, but if you’ve cleared those monsters you can attack the monsters at the location.

Heroes and items can give you quite a few special abilities. One ability will let you hold multiple items, one allows you to hit multiple monsters, one lets you play multiple heroes, and so on.

The taunt ability is probably the most important ability in the game. It allows you to pull one monster from another monster group and put it in front of your character. The defending player can taunt one monster per round by using the round/taunt token, but you can also gain this ability with some hero and item cards.

Once the current round is over, the round token is passed to the next player.

If the players are able to successfully defend the current location at any point during a round, they immediately get a reward. This doesn’t end the current encounter, but those rewards can definitely help!

If you defeat every monster on the table, the current encounter ends. Everyone will get to use their remaining recruitment tokens at this point and they get to level up their characters. In the updated rules, this is also when players can heal up, gaining a set number of health points. Then you’ll set up the next encounter.

If you’re able to accomplish the goals written on the scenario card (usually defeating the final bosses), you win! You’ll lose if any player loses all of their health points.

That’s just a general overview of how to play Battle fro Greyport. If you want to see all of the rules for the game, check out the official (updated) rulebook and How to Play video. 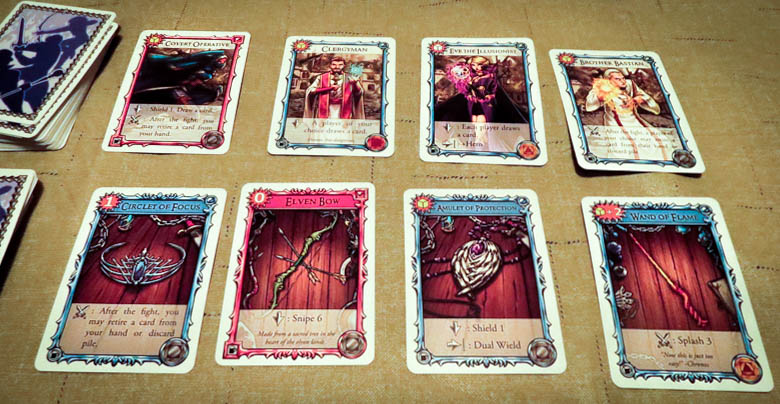 Most of the people in my group have enjoyed playing The Red Dragon Inn: Battle for Greyport. It uses a lot of the same mechanics found in other deck building games, but the little tweaks that the designers made do the job of making it feel like a unique game. All of the scenarios that we’ve played so far have been fun and just about every battle we’ve been in has been exciting.

We didn’t play with the updated rules at first and thought the game was nearly impossible, but those new rules definitely helped us out. It’s not easy to beat, but I’m pretty sure every game is winnable now with those new rules. We do like tough co-op games!

There’s a pretty good chance you’re going to enjoy Battle for Greyport if you like fantasy games and/or deck building co-op games. However, if you prefer shorter co-ops or you don’t like the idea of having to download a new rulebook, then maybe this is one to avoid.

Update: Battle for Greyport was added to our top deck building games list!

Thanks for taking the time to read our The Red Dragon Inn: Battle for Greyport review! To stay updated on all things cooperative board games, follow us on Twitter, Facebook, or via RSS.