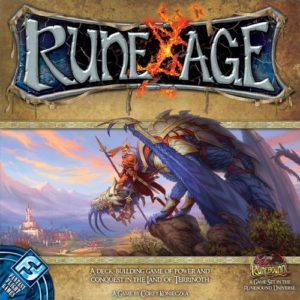 This Rune Age review was made after playing the game about 20 times.

What is Rune Age?

Rune Age is a fantasy deck building game in which players control different races and attempt to satisfy different win conditions depending on the scenarios they choose to play. In the co-op scenario, players work together to try to get through a series of events before anyone’s Home Realm is destroyed. This game is set in Terrinoth, which is the same world used in games like Descent, BattleLore, and Runewars.

Rune Age was designed by Corey Konieczka and published by Fantasy Flight Games. 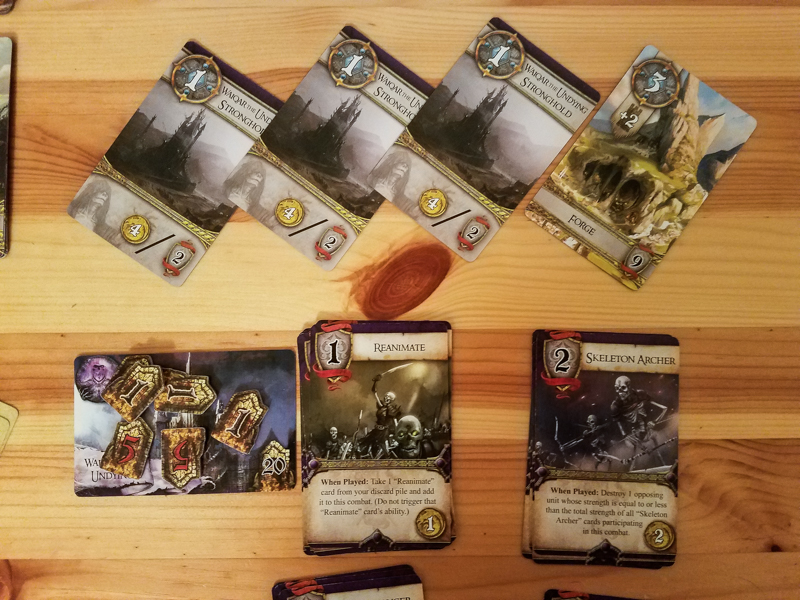 I’ll mostly only be going over the rules for the co-op scenario (‘The Cataclysm’) here, but I will touch on the differences between the four different scenarios you’ll get in the box.

In each game of Rune Age, players will have their own factions and their own Home Realms. Each of the four factions has its own set of four unit cards, which you’ll be able to buy and add to your deck. You’ll also be able to buy three strongholds, which you’ll place above your Home Realm after you buy them. The units are used to attack enemies and to secure cities, and you use the influence of the strongholds (and the cities you gain) to get more gold and neutral units.

You start with five 1-gold cards and three of your 1-cost unit cards in your deck and each turn you’ll be drawing five cards. As you add more cards to your deck, you’ll end up with much more powerful hands. If you’ve played Dominion, you’ll know exactly how this process works.

In the middle of the table will be gold cards (valued at 1, 2, and 3 gold), neutral units, and neutral cities that you’ll be able to buy throughout the game. Those neutral cities are great for giving your faction more influence and to defend your Home Realm. 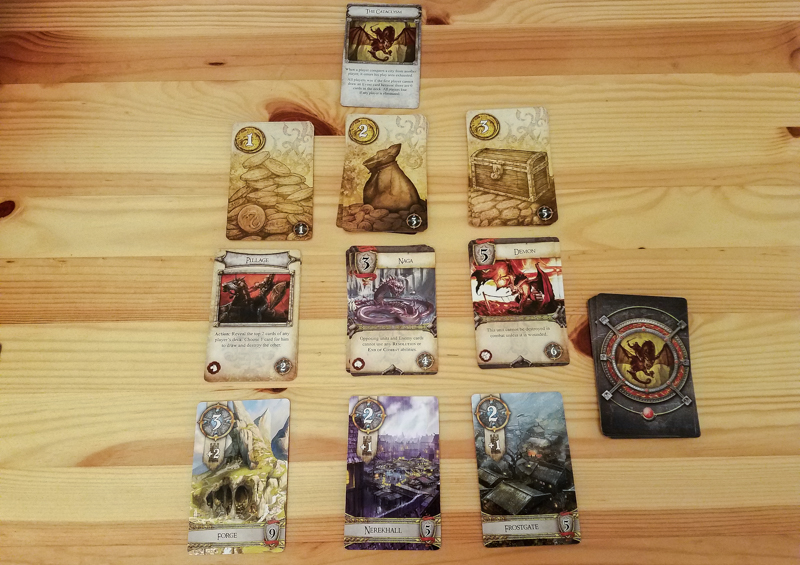 On your turn you’ll be buying cards from your own Barracks (using gold) or from the neutral units (using influence), or you can attack the neutral cities or the enemies that come out of the Event deck (using strength). When you battle an enemy, you’ll be using the abilities and the strength values of your units to try to meet or exceed the strength value of the enemy. In many cases you’ll have to roll the attrition die to see if the enemy killed any of your units; if it did, you’ll remove those enemies from the battle and then check to see if you won the battle.

After all players have taken a turn, you’ll draw an event card from the Event deck. Some of these cards will be enemies and others will be Instants. Instants are cards that immediately affect the game in some way. Enemies will stay in play until they are defeated.

In co-op mode, you’ll win the game if you’re able to draw all of the Event cards before anyone’s Home Realm is destroyed. You don’t have to defeat all of the enemies to win.

There are three other game modes that you can play: 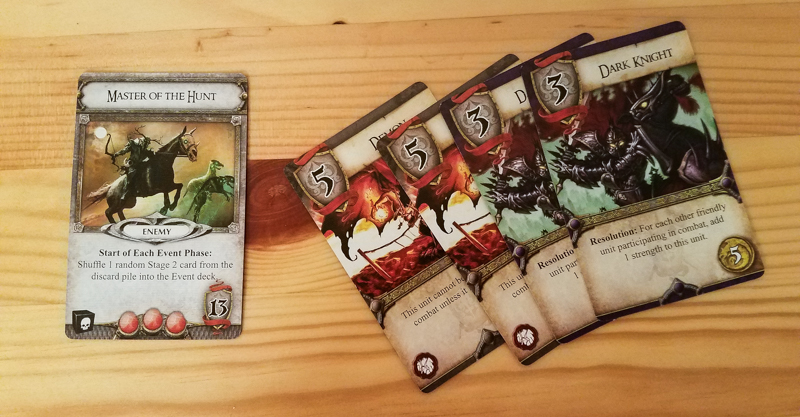 Rune Age isn’t a great game, but I’ve kept it on my shelf the last couple of years because it’s simple to teach and it has four different ways that you can play it. It’s actually worked quite well as a gateway deck builder and the competitive modes are pretty solid. In fact, I’d say the three competitive scenarios are all quite a bit better than the co-op scenario.

If you’re just looking for a co-op deck builder, I wouldn’t recommend Rune Age simply because there are better deck builders out there. If you want a light fantasy deck builder that plays similarly but gives you much more replayability, I’d recommend checking out The Red Dragon Inn: Battle for Greyport. Heavier fantasy deck builders my group enjoys playing include Aeon’s End, Dragonfire, and Shadowrift 2nd Edition.

Thanks for taking the time to read our Rune Age review! To stay updated on all things cooperative board games, follow us on Twitter, Facebook, or via RSS.