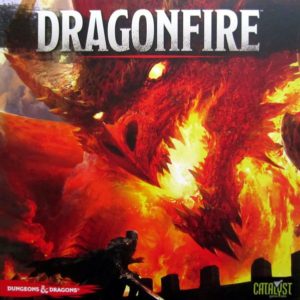 This Dragonfire review was made after playing the game nine times. We were sent a copy of this game by the publisher in exchange for an honest review.

Dragonfire is a cooperative deck building game in which you and your friends take on different adventures inside of the Dungeons & Dragons world. It uses a similar game system to the one found in Shadowrun: Crossfire, but there are a few new mechanics added in, including Skill Checks. 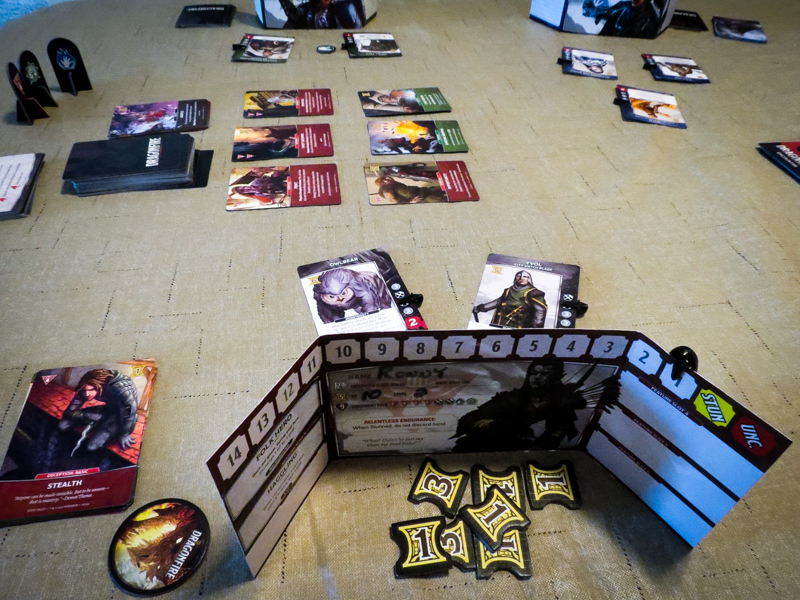 I’m not going to go over every rule in this review, but you should learn enough to know how the game plays.

At the start of every game of Dragonfire, players will look at their character screens to see what Equipment Packs (starting decks) they get, their starting hand sizes, their health, and their starting gold. All of this will be based on the race and class of each character. You’ll also set up the market, which is made up of six cards that you will be able to buy and replace throughout the game.

The adventure you choose to go on will tell you how to complete setup and what you will need to do to win. Most of the adventures have a bit of story you can read in the campaign booklet, which sets the scene and helps you get into character. The adventure card will also tell you any additional rules you’ll need to follow and the rewards you can potentially get.

The adventures are made up of Rounds and Scenes. A round ends after everyone in your group has taken a turn. Scenes end when you’re able to clear out all of the encounters. In most cases you’ll need to clear three scenes to beat the adventure. 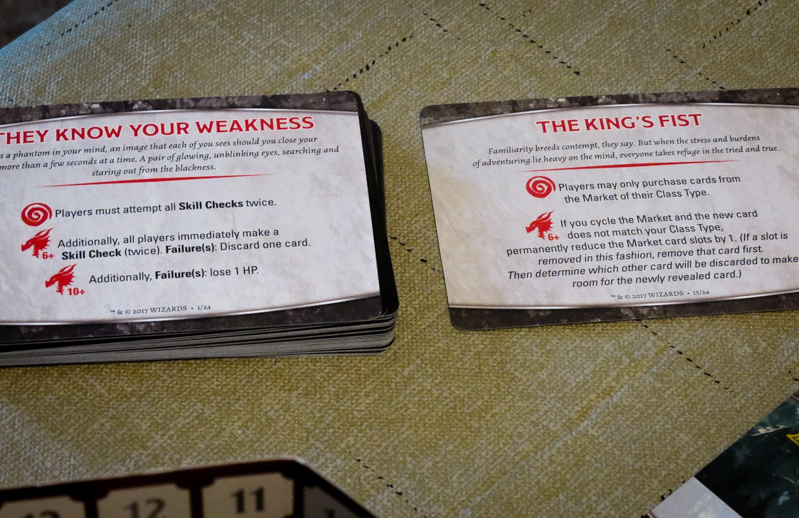 Each turn you’ll be able to use your cards to try to take out some enemies. All of the encounters have damage tracks that will tell you the amount of and type of damage you’ll need to have to defeat them Sometimes you’ll have to have a specific type of card to clear a level of the track and sometimes it can be colorless (any color can be used). In most cases you’ll need to clear each level of the track from top to bottom, though some cards allow you to break that rule.

Unless you are on a location card, which is a special kind of encounter, you can go after any of the encounters in front of any of the characters, or even pull them towards you with some card effects. If you have a card with the Assist ability, you can play that card out of turn to help your teammates. When you defeat an encounter, the whole group shares the gold reward.

Skill Checks and Saves, which D&D players will recognize from the tabletop RPG, are two keywords you’ll see pretty often in this game. When a card requires you to make a Skill Check, you simply draw your top card and check to see if it matches your character’s color. Encounters have the Save keyword, which is the same as the Skill Check except that you draw and check the top card of that encounter’s Encounter Deck. The cards will tell you what to do on successes or failures.

After you’ve resolved all of your cards’ abilities and dished out damage, the encounters in front of you will hit back. After that, you can draw two cards if you have three or fewer cards left and then use your gold to buy new cards, which go directly into your hand.

If your health ever reaches zero, you’ll immediately become stunned. At this point you’ll discard your hand and gain an Exhausted token, which means you’ll only be able to draw one card at a time during the Replenish part of your turn. A stunned character can’t buy cards from the market. If you take damage while you’re stunned or are brought down to zero health while you have the Exhausted token, you’ll become Unconscious and won’t be able to take another turn until the current scene ends.

If you’re able to clear out all of the encounters on the table, the scene ends and you’ll enter a Short Rest. Here you can heal up (discarding the Exhausted token if you have one) and purchase new cards before moving on to the next scene. If you and your teammates clear all of the scenes, you win!

Regardless of whether you won or not, you’ll be able to gain XP (during campaign play) based on how well you did on your adventure. The XP can be used to buy character upgrades in the form of Magic Item cards and stickers.

You’ll choose all of your future adventures based on your Party Level, which is the average of each character’s current level. That might seem confusing, but Character Levels are simply determined by checking how much XP you have and comparing it to the Character Levels table in the rulebook.

And that’s about all you’ll need to know before jumping into your first game of Dragonfire! 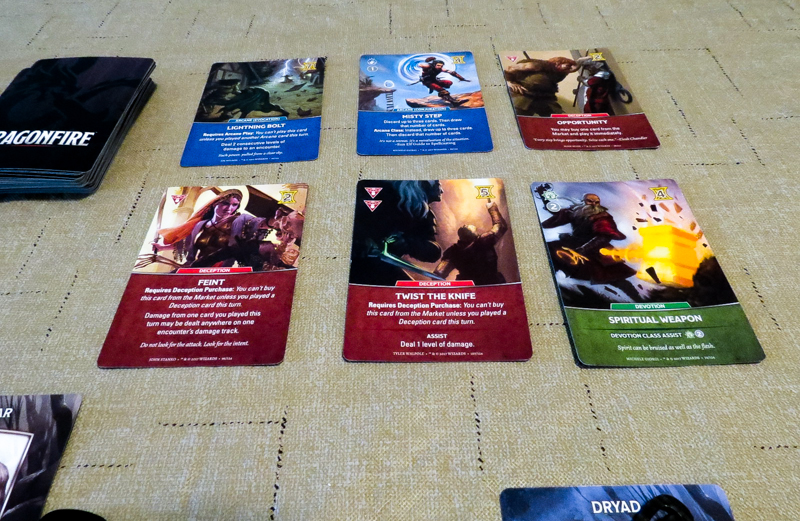 Dragonfire is a fun, exciting, and challenging adventure / deck building game. We’ve won about half of our games so far, but most of them have gone down to the wire and we were happy to get that sweet XP even in defeat!

I don’t know if Dragonfire is better than Shadowrun: Crossfire yet. I never had a problem with SC’s difficulty, but I think anyone who thought SC was too tough should give this one a try. I like the theme in SC a bit more, but there is more of a story going on in Dragonfire and you can do more to upgrade your characters. My group has played SC a lot, so we’ll need to get in 10+ more games of Dragonfire before we decide if it should replace SC on our Top 10 Deck Building Games list. I’m actually happy to own both since they are set in two very different worlds.

I haven’t played enough D&D to say if fans of that game will like this one or not. What I can tell you is that they have included many of the characters and settings from D&D and that the artwork is great. Anyone who likes D&D and also happens to enjoy deck building games will probably love this game.

If you’ve never played SC or D&D and just want to know if this is a good deck builder… Yes, yes it is. You’ll see new, tough enemies every time you play a new adventure and there are some very cool cards that you can add to your deck.

My group absolutely will continue to play Dragonfire and can’t wait to play some of the future expansions!

Thanks for taking the time to read our Dragonfire review! To stay updated on all things cooperative board games, follow us on Twitter, Facebook, or via RSS.