Skip to content
Co-op Board GamesReviewsDungeon Fighter Board Game Review 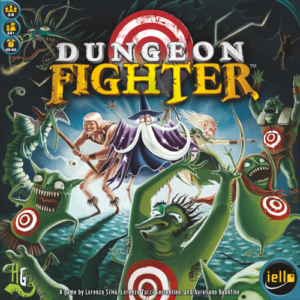 This Dungeon Fighter board game review was made after playing the game about 15 times.

What is Dungeon Fighter?

Dungeon Fighter is a cooperative dexterity game that happens to also be a dungeon crawl. You and your fellow heroes will attempt to move through a dungeon, taking down monsters along the way. You’ll do this by rolling dice in a bunch of weird ways… Don’t worry, it’s fun!

Dungeon Fighter was designed by Aureliano Buonfino, Lorenzo Silva, and Lorenzo Tucci Sorrentino and was published by IELLO.

I’m not going to go over all of the Dungeon Fighter rules here, but you should get a feel for how the game works. It’s actually pretty easy to learn and teach.

Dungeon Fighter is played over a number of rounds in which you are trying to take down monsters by rolling dice toward the bullseye on the board. The closer you get to the middle of this board, the more damage you will do to the current monster. You can also use one of your hero’s three abilities if you roll the hero icon; this is why it is important that you choose a die color (three dice, three abilities) that could benefit you best on your turn.

The rule that never changes is that you must hit the table before the die lands on the target board. However, there are cards, monsters, and room conditions that can force you to roll the dice in different ways. You might have to close your eyes, get below the table, or even turn your back to the board.

There are three levels to the dungeon, each with different rooms that you can explore. Some rooms allow you to purchase equipment at the shops, some let you heal yourself, some have treasure, and others make monsters tougher to defeat. Once you get past the last room of a level, you will move on to the next level.

If you want to see a full write-up of the game’s rules, check out the official Dungeon Fighter rulebook (PDF).

Check out Dungeon Fighter on Amazon

Dungeon Fighter is a blast! No, it’s not the type of game that will hit the table every week, but I always know that that I’m going to have a good time when it does. I’ve actually been playing this game for years now and still get a kick out of it every time. It’s definitely one of the best cooperative dexterity game my group has played so far.

This is considered a dungeon crawl game, but it’s really a party game with goofy artwork and plenty of laughs to go around. If you know that going into it and it still sounds like a game you’d enjoy, then you and your group should have a great time playing Dungeon Fighter.

If you do end up enjoying the base game, be sure to check out these Dungeon Fighter expansions:

Thanks for taking the time to read our Dungeon Fighter board game review! To stay updated on all things cooperative board games, follow us on Twitter, Facebook, or via RSS.