Skip to content
Co-op Board GamesReviewsThe Crew: The Quest for Planet Nine Review 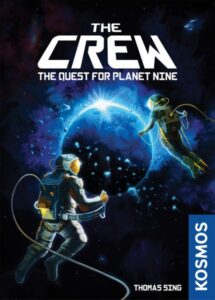 This The Crew: The Quest for Planet Nine review was made after playing the game about 20 times.

What is The Crew?

The Crew: The Quest for Planet Nine is a cooperative trick-taking game in which you play as astronauts who are tasked with finding out if there is a ninth planet in the solar system. The Crew was designed by Thomas Sing and it’s published by KOSMOS. 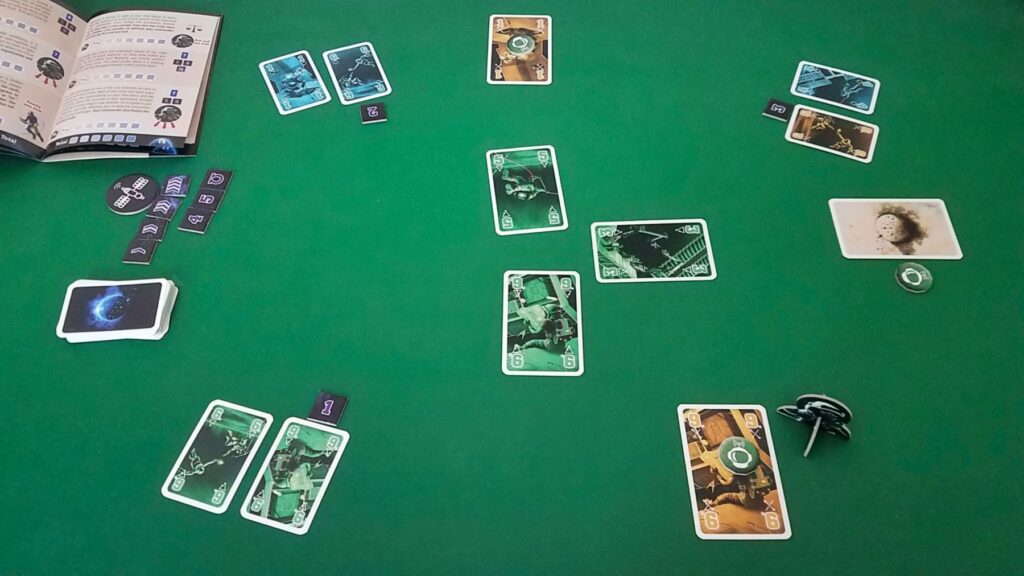 You can play The Crew as a 50-mission campaign, with the difficulty slowly ramping up as you move through the missions, or you can choose to play the missions out of order.

The main 40-card deck is made up of four suits with values 1-9 and four rocket cards with values 1-4. Like in other trick-taking games, each player plays one card from their hand each turn/trick and the highest-valued card wins the trick. The rockets are the highest-valued cards in the game, but a rocket can only be played if it’s the first card played in a trick or if a player doesn’t have any cards of the suit that led the trick.

There’s also a 36-card deck of smaller task cards containing the same cards as the main deck but with no rockets. These cards tell you which “tasks” you’ll need to complete during the missions.

Each mission you deal out the entire 40-card deck and the mission description will usually tell you to lay out a specified number of task cards on the table. The commander (the player with the 4 Rocket card) usually chooses the first task and then you go clockwise around the table until all of the tasks have been picked. Each player’s goal is to complete all of their tasks, which means that you need to win all of the tricks that have the cards matching your task cards. You’ll beat most missions when you complete all of the tasks.

The rules change a bit from mission to mission. For example, during some missions you’ll have to complete tasks in a specific order, while in some other missions one player will have to win all of the tricks.

You’re not allowed to talk about the cards in your hand, but once per mission you can “communicate” by putting a card in front of you and use your radio communication token to mark it as the highest, the lowest, or the only card of that suit in your hand. Let’s say you are tasked with winning the trick with the Green 5 and your only green card is the 2. You can mark that the Green 2 is your only green card so the other players know that you need to get rid of it. That will make it easier for you to win the trick with the Green 5 later on.

The rulebook includes a logbook that allows you to track your progress during the campaign. You can mark off the missions you’ve completed and how many attempts each mission took.

The Crew was designed to be a 3-5 player game, but there is a two-player variant included in the rules. It’s similar to the three-player game, but the third player’s cards are put on the table and the commander plays their cards for them.

To me, The Crew is a good filler game, but not a great one. It plays smoothly and I really like that radio communication mechanic, but the lack of tension keeps it from being a hit. The truth is that right now I’d rather play Spades or Tichu if I’m in the mood for a trick-taking game, and I’d rather play The Mind or Hanabi if I want to play a quick limited communication board game.

I think I just prefer competitive, team vs. team trick-taking games at this point. That could change, though, because I have a feeling that the success of The Crew will inspire other designers to get to work on some awesome new cooperative trick-taking designs.

I should point out that I’m in the minority in not loving the Crew. It’s actually one of the highest-rated cooperative games released so far this year and it’s expected to win many awards. It just didn’t click with my group as much as it did with others. I’d say give it a try if you think your group might enjoy it.

Thanks for taking the time to read our The Crew: The Quest for Planet Nine review! To stay updated on all things cooperative board games, follow us on Twitter, Facebook, or via RSS.