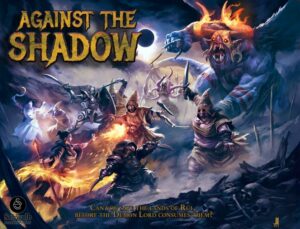 This Against the Shadow review was made after playing the game eight times. We were sent a prototype copy of this game by the publisher in exchange for an honest review.

This is a Kickstarter preview so rules, components, and art could change before the game comes out. This will become a full review once we’ve had a chance to play the retail version of the game.

What is Against the Shadow?

Against the Shadow is a cooperative horror-fantasy board game in which you play as powerful patrons who are attempting to keep the Demon Lord from destroying the world. The game is set in the same world found in the Shadow of the Demon Lord roleplaying game.

Against the Shadow was designed by Adam Doochin and Dan Heinrich and is published by Schwalb Entertainment.

Against the Shadow Gameplay 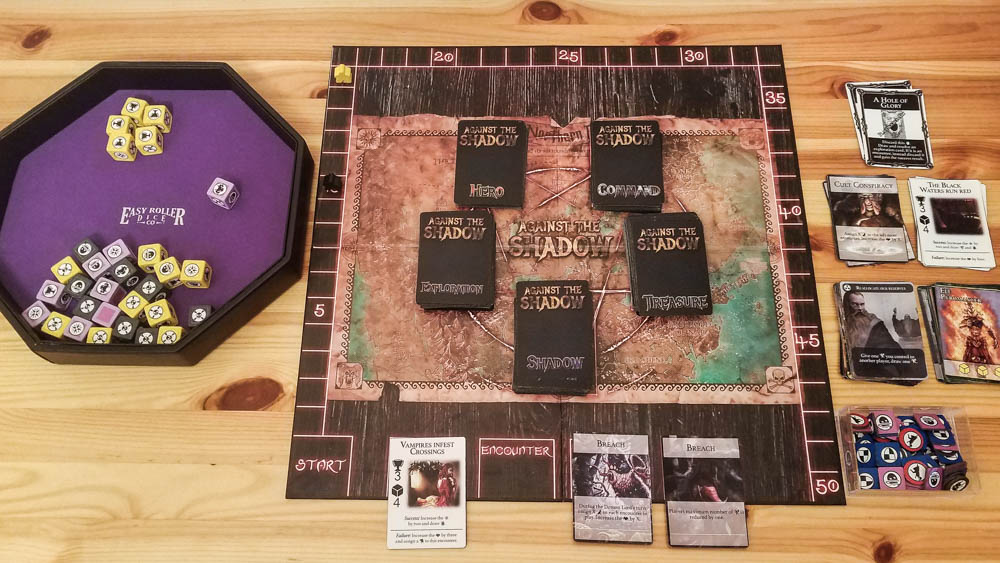 Against the Shadow is basically a race game in which you’re trying to reach 50 Light before the Demon Lord reaches 50 Shadow. The Demon Lord will raise the Shadow every round by varying amounts, so you have to take on Encounters and use your cards to hopefully make it to 50 first.

There are five different types of cards in Against the Shadow:

You and everyone else on your team will have a patron board showing your traits and abilities. Each Command card has a trait on it, and if you play a card that matches one of your patron’s traits, you get to use the ability shown on your board.

The Demon Lord gets to take his turn at the start of each round. You’ll roll one Insanity die and check the chart to see what effects take place, which is always bad unless you roll the blank side. He often raises the Shadow level and/or makes encounters more difficult by adding demons and cultists to them. After the Demon Lord takes his turn, all of the players get to take their turns.

Players can take their turns in any order. At the start of your turn you’ll draw one Curse card, which is always some type of bad event. After that you can take actions in any order, including recruiting one hero, exploring, playing Command cards, using treasures, and fighting. Other players can also use their Command cards to help you out. Most of the time you’re using your other actions to become as powerful as you can for your Fight action.

To fight, you’ll gather up all of the Light, Shadow, and Insanity dice in your pool and roll them together. You’ll then check to see how many of your heroes died, how much insanity was cast on your remaining heroes, how much Shadow and Light was gained, and whether or not you defeated the encounter.

You’ll win the game if you’re able to get to 50 Light. You’ll lose if the Shadow ever reaches 50 or if the four Encounter spaces are ever filled with Breach cards. 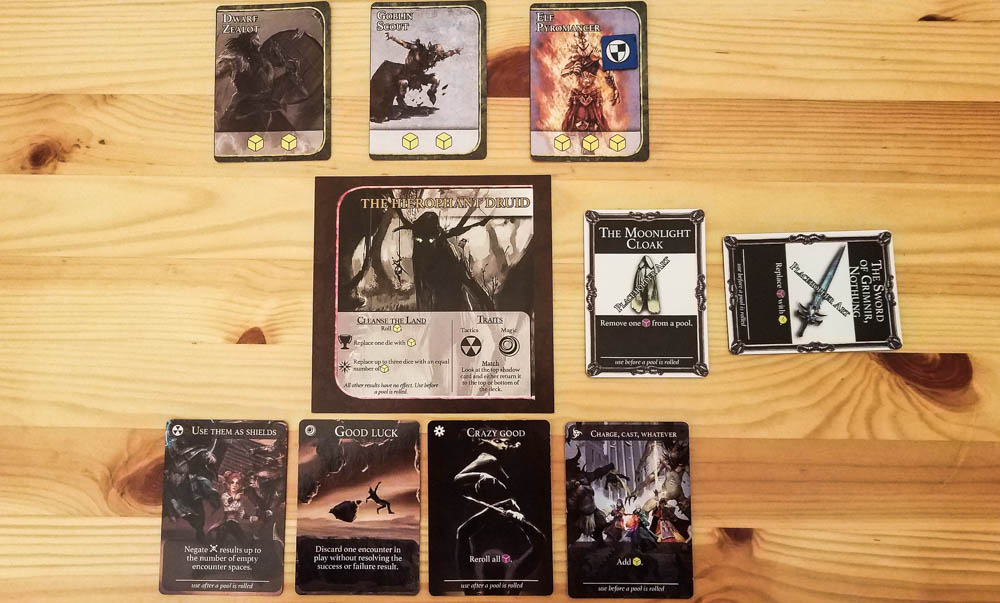 Against the Shadow Links

Thanks for taking the time to read our Against the Shadow review! To stay updated on all things cooperative board games, follow us on Twitter, Facebook, or via RSS.