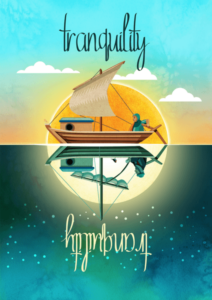 This Tranquility review was made after playing the game six times (4 two-player games and 2 three-player games).

Tranquility was designed by James Emmerson and is published by Board Game Hub. 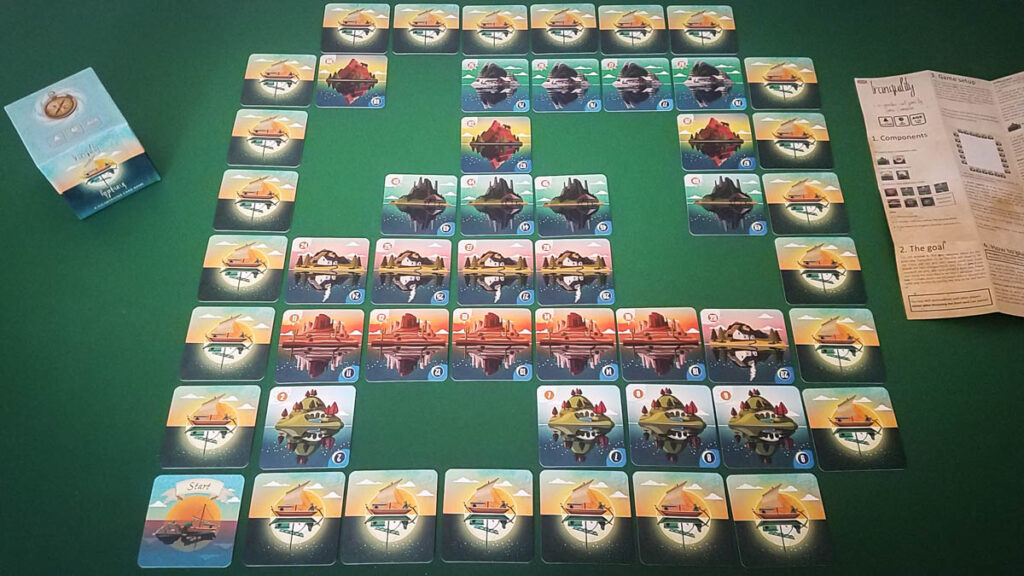 Tranquility is all about cooperatively filling up a 6×6 grid with cards, but the catch is that you can’t discuss strategy with your teammates or talk about the cards you have in your hand. The cards are numbered from 1 to 80 and by the end of the game you need to fill in the 36 spots with cards going in ascending order from the bottom-left of the grid to the top-right. The cards are evenly distributed so each player has their own deck and you’ll have a hand of five cards throughout the game.

You have two options each turn: play a card or discard two cards.

When you discard cards, you put them face down in your own discard pile. That way no one knows what you’ve discarded and you have to try to remember the cards that are no longer available.

Each player’s deck has a Start card and there are also five Finish cards mixed into the deck at the beginning of the game. Whoever draws their Start card first has to place it next to the grid and the group has to collectively discard eight cards; this is the only time you’re allowed to talk to your teammates since you have to decide how many cards each player is going to discard. The only way for someone to play a Finish card is if the entire grid is filled at the start of their turn.

You’ll win if you place the Finish card. You’ll lose if any player can’t perform a legal action on their turn.

The game comes with three mini expansions that make Tranquility more challenging. There are also some other variants on BGG.

For more info on how the game plays, check out the Tranquility rulebook at BGG.

Tranquility is a very relaxing and pretty challenging cooperative game, which is obviously what the designer was going for, but it’s just not my type of game. Don’t get me wrong, I’ve had a good time playing it and I think the art is excellent, but I like my co-ops with a bit more oomph and player interaction. Still, I might keep this on my shelf for a while because I know plenty of gamers and non-gamers who definitely prefer this type of chill game.

If you’re looking for a relaxing co-op (or solo game), there’s a good chance you’ll enjoy playing Tranquility and you’ll get plenty of plays out of it. If you want a limited communication card game with more tension, I’d recommend The Mind and/or Hanabi.

Thanks for taking the time to read our Tranquility review! To stay updated on all things cooperative board games, follow us on Twitter, Facebook, or via RSS.