This Batman: The Animated Series – Gotham City Under Siege review was made after playing the game six times.

What is Batman: The Animated Series – Gotham City Under Siege ?

Batman: The Animated Series – Gotham City Under Siege is a cooperative superheroes game in which you’re attempting to fight villains, protect citizens, and survive through four acts. The game was designed by Michael Guigliano and Richard Launius, and it is published by IDW Games. 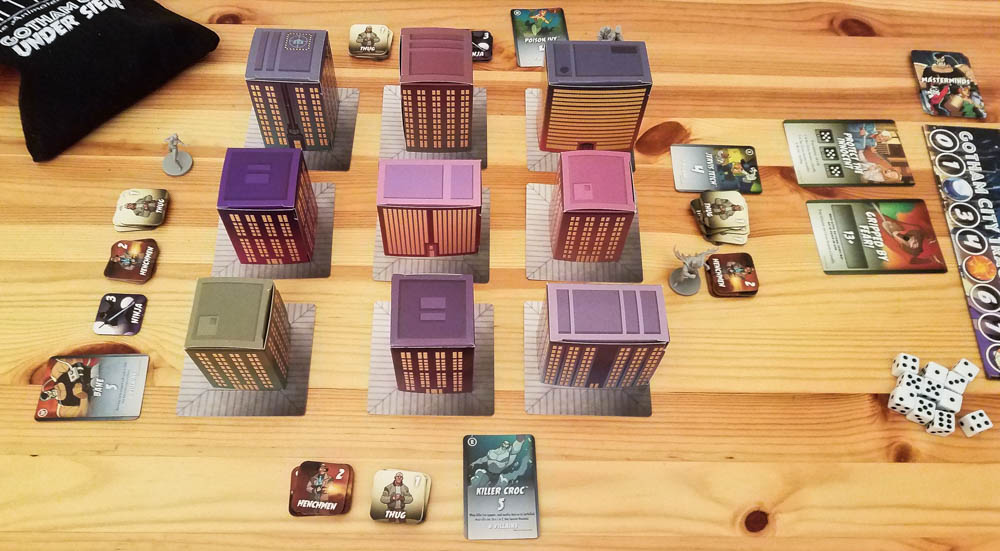 Batman: The Animated Series – Gotham City Under Siege is played over four acts. In each act, you’re attempting to defeat a bunch of villains, including Masterminds, while also dealing with different events that pop up in the form of Story cards. You’ll be attempting to deal with as much as you can before the act ends to avoid explosions and civilian casualties. 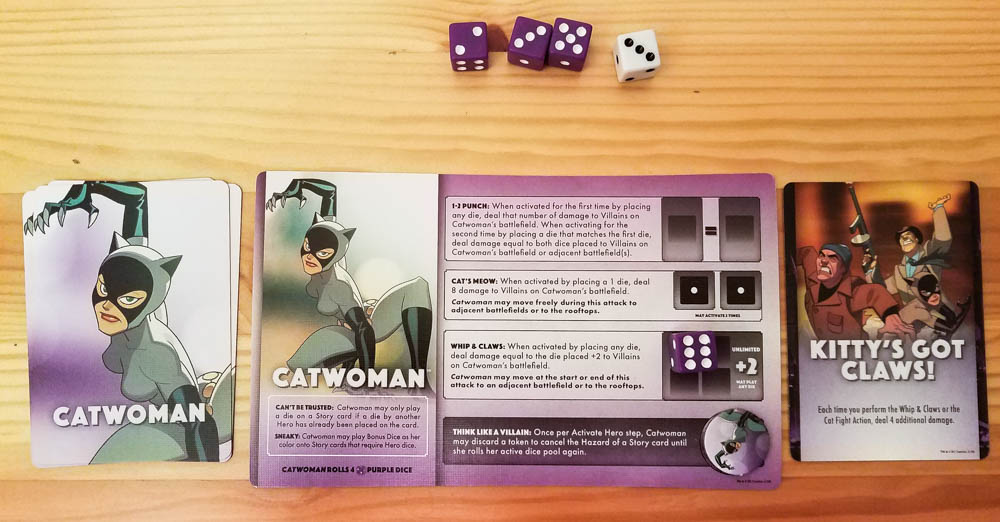 Everyone in your group will control one or more heroes during the game. At the beginning of each act you’ll draw two of your hero’s Skill cards and choose one to use during that act. Your hero board will list your special abilities, your dice actions, as well as a special action you can take when you discard one of your two Skill tokens.

During the Hero Phase, everyone will roll their dice (and bonus dice), use one die, roll the unused dice, use one, and so on until all of the dice have been used. You’ll either be placing a die on your hero’s board to activate an ability or placing it on a Story card. Your abilities will tell you exactly what you can do on your turn, such as moving and attacking. You’ll usually be attacking villains in your current location in the city, but if you’re on a rooftop you can attack any of the four sides/battlefields of the city. You can also use one of your team’s Bat Signal points to increase or decrease a die by one before you place it. 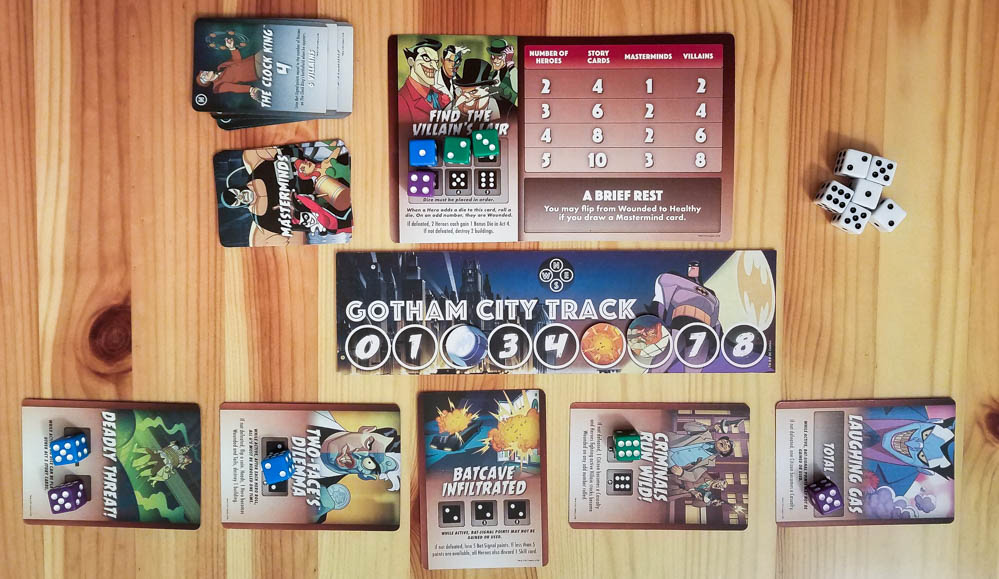 After everyone has used all of their dice, the Crisis Phase begins. This is when the penalties on all active Story Cards are resolved and when the villains fight back. All of the villains that are still in the city will try to attack, but you can attempt to defend against one Mastermind or villain stack in your location by rolling a die and hoping for enough damage to defeat them. When a building is destroyed, you’ll flip the card below that building and resolve it, usually resulting in a casualty or an explosion.

You’ll lose the game if the Explosion or Citizen token ever reaches the zero space, or if any hero takes damage when they’re already wounded. You’ll win if you make it through the four acts without any of those things happening.

Hopefully that gives you an idea about how this game plays. For more info, check out the official rulebook over at BGG. 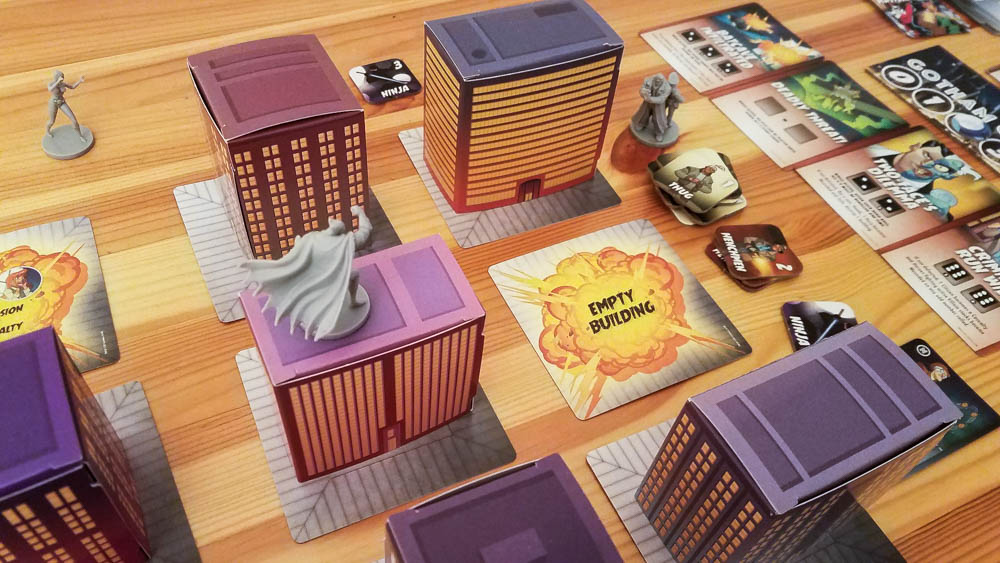 Batman: The Animated Series – Gotham City Under Siege is definitely a keeper. It does exactly what I thought was missing in Thanos Rising: It makes you feel like you’re controlling unique and powerful characters.

I’ve played six games so far with a total of six other people and everyone has had a good time playing it, even those that never watched series. I was a huge fan of that series (my favorite version of Batman) and I have not been let down in the slightest. It plays smoothly, it looks great, and it requires a ton of teamwork.

I really hope that they make some expansions for this one. I want to see more heroes, more villains, more acts, more Story cards… MORE!

This is one of the best co-ops I’ve played this year. I definitely recommend it, especially as a 3-5 player game.

UPDATE: Batman: The Animated Series – Gotham City Under Siege made it onto our Best Cooperative Board Games of 2018 list!

Thanks for taking the time to read our Batman: The Animated Series – Gotham City Under Siege  review! To stay updated on all things cooperative board games, follow us on Twitter, Facebook, or via RSS.