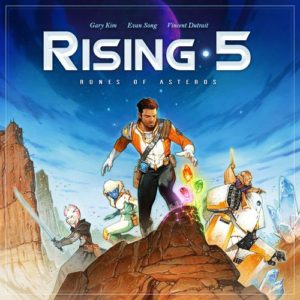 This Rising 5 review was made after playing the game five times.

Rising 5: Runes of Asteros is a cooperative deduction game in which five heroes are attempting to close a Rune Gate before evil monsters are able to take over their planet. It’s kind of like a co-op version of Mastermind that is playable for up to five players and uses an app so no one needs to be the game master (though you do have that option).

Rising 5 was created by Gary Kim and Evan Song, and it is published by Grey Fox Games. 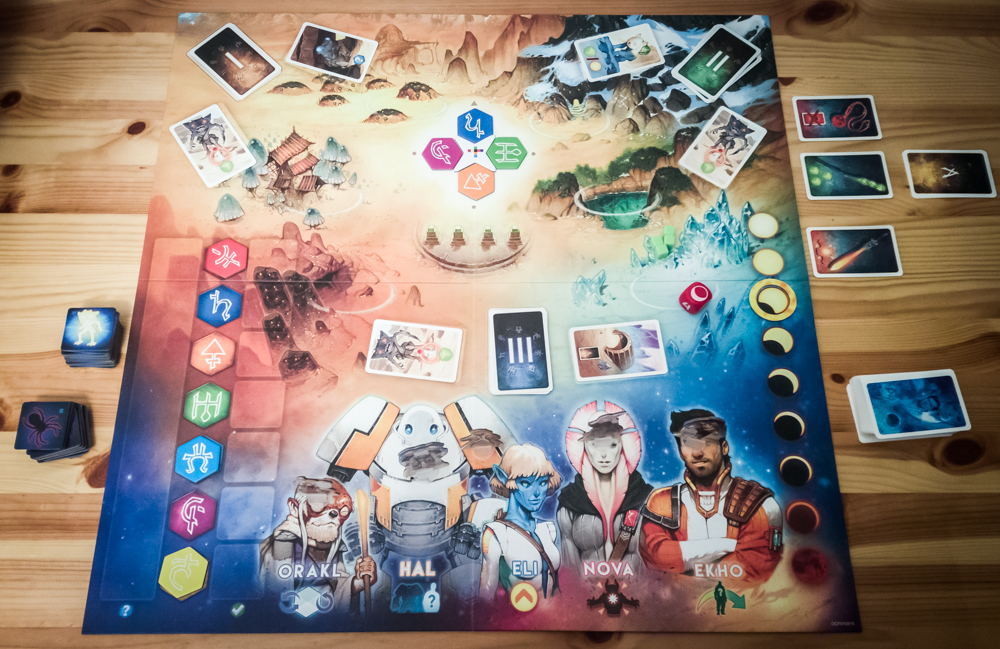 To begin a game of Rising 5: Runes of Asteros, you will shuffle the seven Rune tokens and place four of them around the Gate marker on the board. You’ll then scan the runes with the app and it will create that game’s puzzle for you. Your job is to put the correct runes in the slots before the Red Moon (health) track reaches the Total Eclipse space.

Each character also has a special ability that you can activate before taking your turn. Orakl, who is easily the most important / powerful character, allows you to move Runes around. Eli is able to move the Eclipse marker one space up the Red Moon track. Nova can fight any monster from any location. Ekho can move other characters around the planet. HAL doesn’t have his own special ability, but he can copy the ability of any character in his location.

There are three types of actions in this game: Move, Encounter, and Seal the Gate. You can do any of these actions on your turn (even repeating them) as long as you have enough cards on the table.

When doing the Encounter action, you’ll either be fighting a monster or simply gaining rewards from Helper and Artifact cards.  When you fight a monster, you’ll roll a die and try to meet or exceed the number on the monster’s card. You get +1 to your dice rolls for having other characters on your space and you also get +1 for each character card other players give you. If you win the battle, you’ll gain the rewards shown on the card. If you lose, the Eclipse marker moves down the Red Moon track by the number of Red Moons shown on the monster’s card.

Successful encounters can give you a number of rewards, including Silk cubes, healing, and clues. Some rewards are immediate, while others come in the form of relics and artifacts. When you gain relics and artifacts, you place them next to the board and anyone can use them on future turns. When you get a clue, you’ll be able to find out the identity of one of the runes in the app.

If your team has been able to gather four Silk cubes, you can take the Seal the Gate action. This is when you get to see how close you are to closing the gate. You’ll scan the four runes and the app will show you symbols that are dark, shining, or golden. A dark symbol means that a rune isn’t part of the puzzle, the shining symbol means a rune is in the wrong position, and the golden symbol means a rune is where it’s supposed to be. What you’re trying to do is figure out the symbols that go with each of the runes; you can keep track of this both in the app and by placing the symbol tokens next to the rune colors on the board. The app also shows you a history of your scans so you can quickly compare results.

At the end of your turn you can draw as many cards as you want to up to your hand limit. The reason why you might choose not to draw more than one card is because there are Red Moon cards in the deck. When drawn, the Red Moon is placed face-up on top of the deck and activates at the end of the next player’s turn. When the Red Moon activates, you count up the total amount of red moons showing on the monster cards in play and move the Eclipse marker down that many spaces.

If you’re able to put the correct runes at the gate and perform the Seal the Gate action, everyone wins! You’ll lose the game if the Eclipse marker ever reaches the last space on the Red Moon track or if the character deck ever runs out of cards.

So, to sum up, you’re trying to take down some monsters, gain some Silk Cubes, put the right runes in the right locations, and seal the gate! 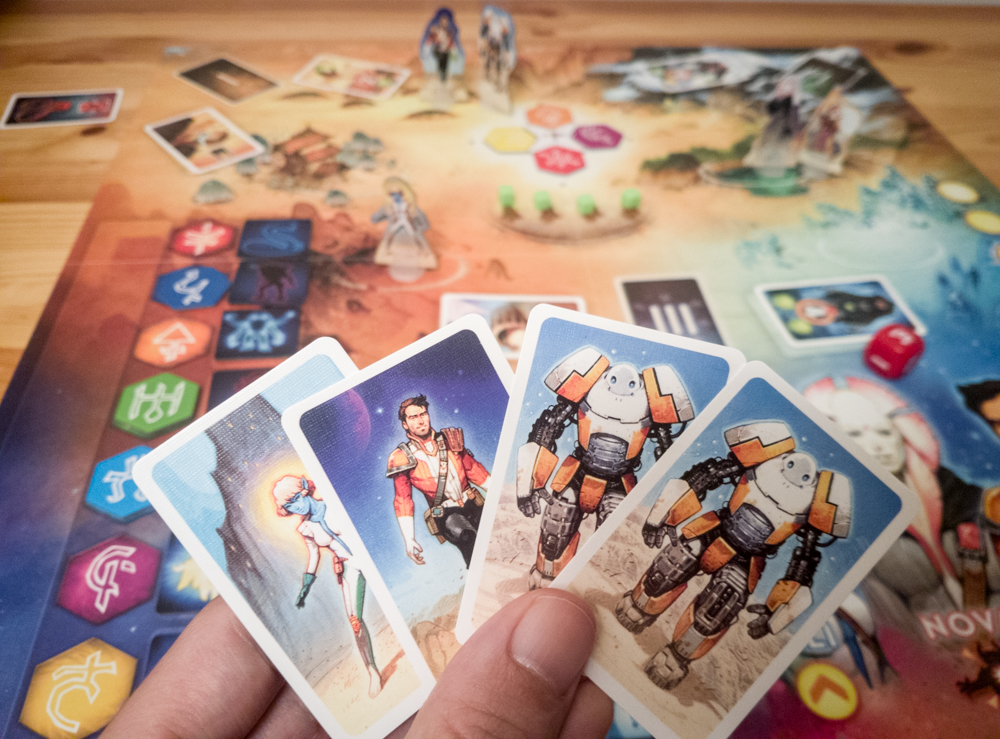 Rising 5: Runes of Asteros is a unique co-op and one my group has enjoyed playing over the last couple of weeks. It’s easy to learn, it’s quick, and it looks great on the table. It’s kind of like Pandemic with some deduction mixed in, which is a combo a lot of people will like. I can’t say this was a hit for me, but it is one of those games that I’d give as a gift and be confident the receiver would enjoy it.

Thanks for taking the time to read our Rising 5 review! To stay updated on all things cooperative board games, follow us on Twitter, Facebook, or via RSS.