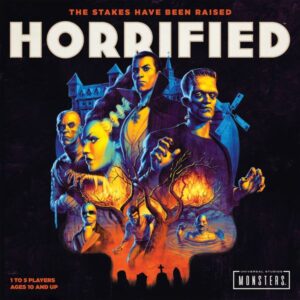 This Horrified review was made after playing the game five times.

Horrified is a cooperative pick-up and deliver board game in which you get to take on a bunch of Universal Pictures’ famous monsters. The game was made by design group Prospero Hall and is published by Ravensburger. 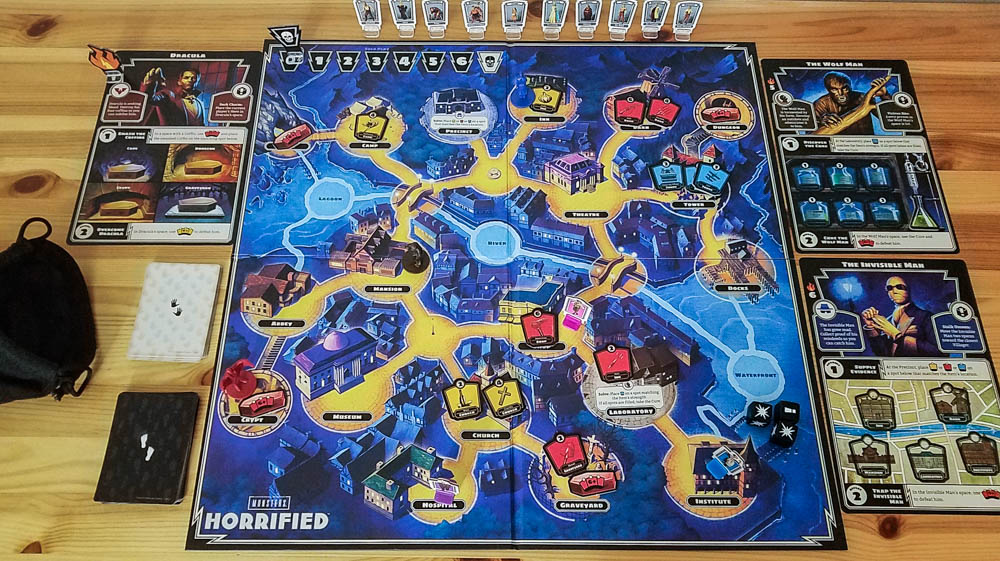 Your goal in Horrified is to defeat all of the monsters in play. The monsters included in the game are Frankenstein, The Bride of Frankenstein, The Wolf Man, Dracula, The Mummy, The Invisible Man, and the Creature from the Black Lagoon. Every monster has a unique power and you’ll need to complete specific tasks to be able to defeat them. You’ll face two monsters at the easiest difficulty level, three at the standard level, and four at the most challenging level.

At the beginning of the game, every player gets one of the seven heroes as well as a Perk card. Your hero badge tells you how many actions you can take per turn (most have four), your unique special ability, and where you start on the board. Each Perk card gives you a one-time-use ability that you can use on anyone’s turn.

Each turn is made up of a Hero Phase and a Monster Phase. You’ll go through those two phases and then the next player takes their turn.

During the Hero Phase you’ll mostly be moving around the board, picking up items, and using items at specific locations to slowly take down the monsters. You can also move villagers around the map to keep them away from the monsters. You gain a Perk card every time you get a villager to their safe location. 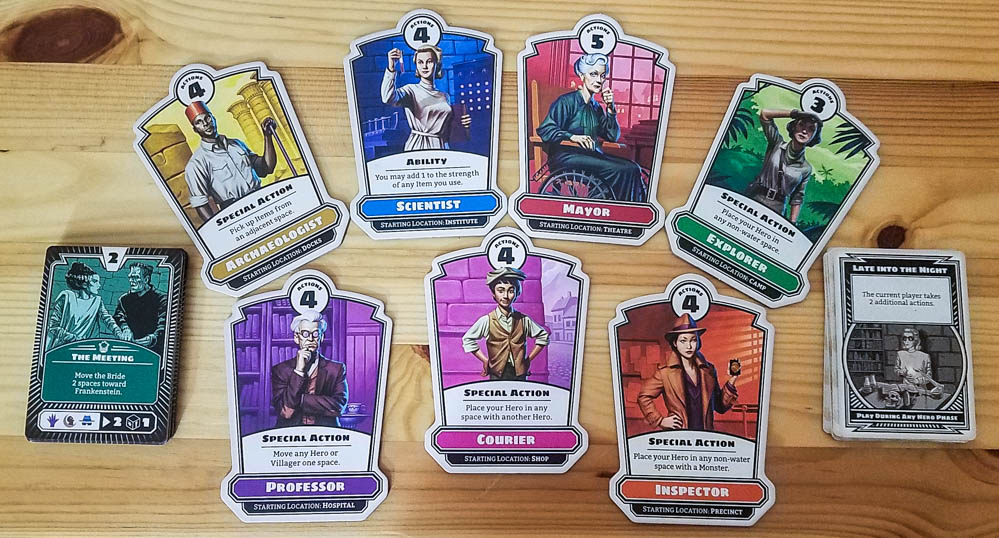 During the Monster Phase you’ll draw one Monster card and resolve the three parts of the card. First, you’ll look at the number at the top of the card, draw that many new items from bag, and place those items at their locations on the board. Next, the Event will either add a new villager to the board or activate a specific monster (if it’s in the game). Finally, you’ll check the bottom of the card to see if any of the monsters in play move and attack.

After a monster moves, you’ll first check to see if they’re within range of a hero or villager and, if they are, you’ll roll one or more attack dice. The two bad icons on the dice are the Hit icon and the Monster’s Power icon. If the Hit icon is rolled against a villager, they’re automatically defeated and the Terror Level moves up one space. If the Hit icon is rolled against a hero, that hero can either use items to block the hit or they take the hit, raise the Terror Level, and move to the hospital. The Monster’s Power icon activates the monster’s special ability.

You’ll win the game if you’re able to defeat all of the monsters. You’ll lose if the Terror Level reaches 7 or if the Monster deck is empty when you need to draw a card. 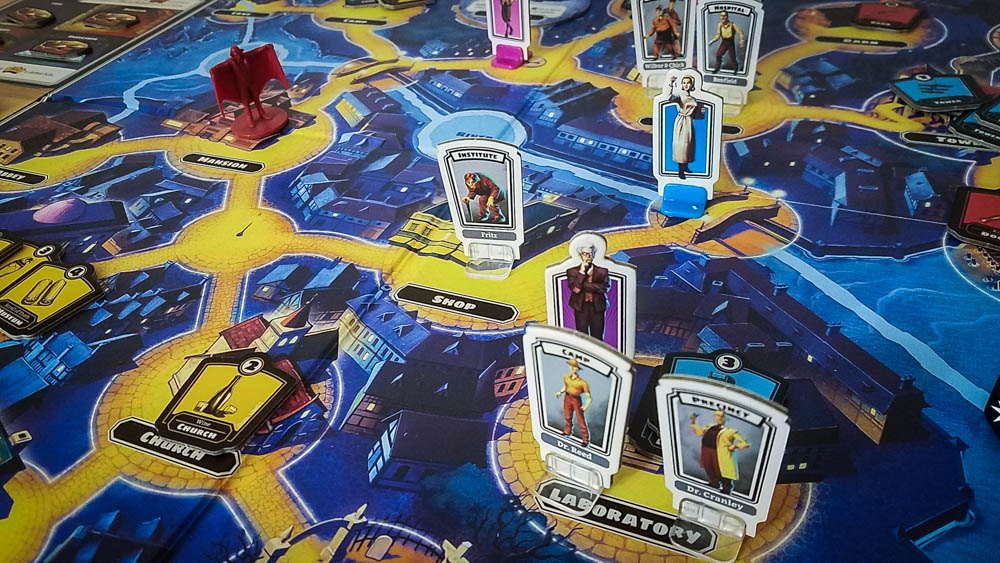 Horrified fell pretty flat for me and my group. It has some of my favorite Universal monsters and it has a very nice look to it, but the gameplay is a bit too repetitive for me and even my group’s close wins weren’t that satisfying. It probably didn’t help that we anticipated a tense monster-fighting experience and the game ended up being more of a relaxing co-op.

Even though Horrified isn’t for me, I can still see why so many people like it. Heck, I know a lot of people who prefer light and relaxing co-ops. Horrified has a cool theme and it’s easy to learn, so I could see it working extremely well as a gateway and/or family board game for some people.

Thanks for taking the time to read our Horrified review! To stay updated on all things cooperative board games, follow us on Twitter, Facebook, or via RSS.

Team Up! Review
Castle Ravenloft Board Game Review
Top 10 Cooperative Board Games for Five or More Players
A Touch of Evil Review
Follow us: