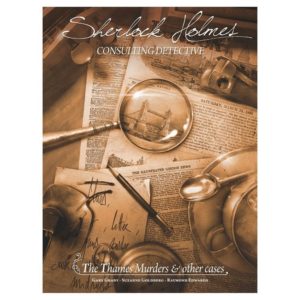 This Sherlock Holmes Consulting Detective review was made after playing through four of the cases.

What is Sherlock Holmes Consulting Detective?

In Sherlock Holmes Consulting Detective you and your friends try to solve one of the 10 cases included in the box. Sherlock will give you the details of each case, then you will use the case book, the London Directory, a map of London, and local newspapers to find all of the clues that you need to solve it.

Sherlock Holmes Consulting Detective was designed by Raymond Edwards, Suzanne Goldberg, and Gary Grady, and it is now published by Space Cowboys. 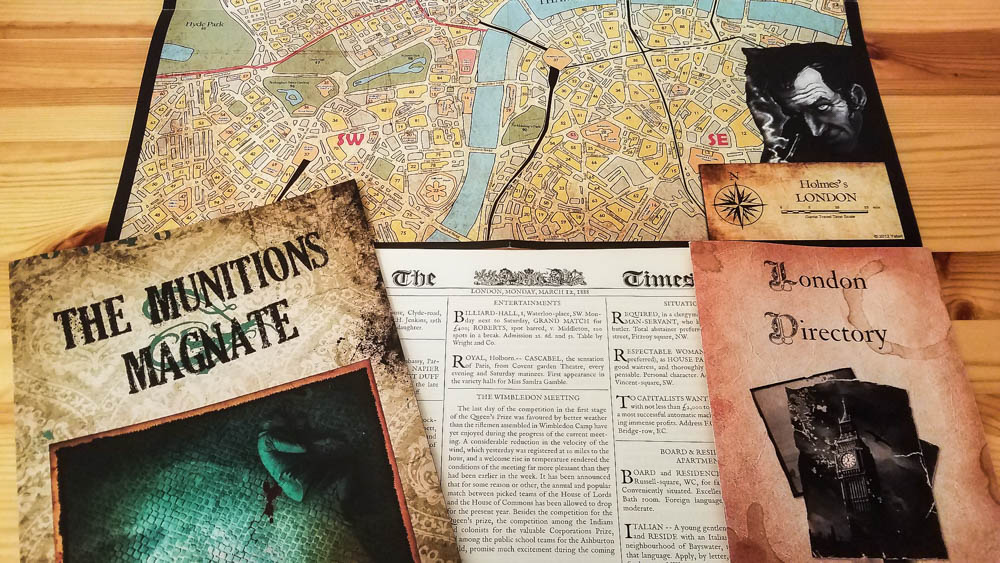 Each game of Sherlock Holmes Consulting Detective starts with someone reading the case details aloud. While one person is doing this, the other players should be taking notes so they can figure out which leads to pursue.

After you’ve read through the case file, you will start trying to solve it. This means that you will need to read through the newspaper to find clues, and use the directory to find leads. On top of that, you can always look at the map to see if there is anything nearby that can help you solve the case. It’s up to you to decide where to go next.

Even though anyone can choose which lead to follow next, it is recommended that you go around the table picking one lead at a time. You can also decide on leads to pursue as a group, then simply pass the case book around the table to let everyone have a chance to read. It really is up to your group.

Once you and your team of detectives think that you have figured out the mystery, it is time to answer the questions at the back of the case book. You are hoping to score more points than Sherlock himself (good luck with that!) by answering all of the questions correctly and by using as few leads as possible. For us, it is more about solving the case than beating Sherlock’s score, but it’s always fun to read about how he went about solving each case.

Sherlock Holmes Consulting Detective is pretty freakin’ amazing! It’s such a fulfilling feeling to solve the mysteries this game throws at you, and my group has even had a great time when we haven’t figured them out.

I’m a huge fan of this game as is the rest of my group, but it’s not necessarily for everyone. For example, if you’re not into deduction games, then you might not be a fan of this one. But I still say give it a try since it’s unlike other deduction board games out there right now.

This goes right near the top of my group’s top-rated cooperative board games list. It’s different than every other co-op game that we’ve played, and it’s one of those rare games that feels complete. It’s a must-have game for Sherlock Holmes’ fans… and just about everyone else. If you’re looking for a Sherlock Holmes board game to get to play with friends and/or family, I’d say this is the one you should check out first.

Update: All links now point to the newest version of the game. I’ve heard that the newest edition fixes some of the minor issues some people had with the older versions.

Thanks for taking the time to read our Sherlock Holmes Consulting Detective review! To stay updated on all things cooperative board games, follow us on Twitter, Facebook, or via RSS.