Skip to content
Co-op Board GamesReviewsHotshots Board Game Review 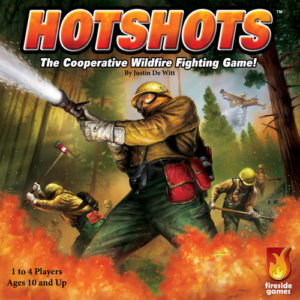 This Hotshots board game review is based on a total of seven plays.

Hotshots is a cooperative push your luck game in which you and your teammates are attempting to put out a wildfire before it scorches too much of the land. Hotshots was designed by Justin De Witt and published by Fireside Games. 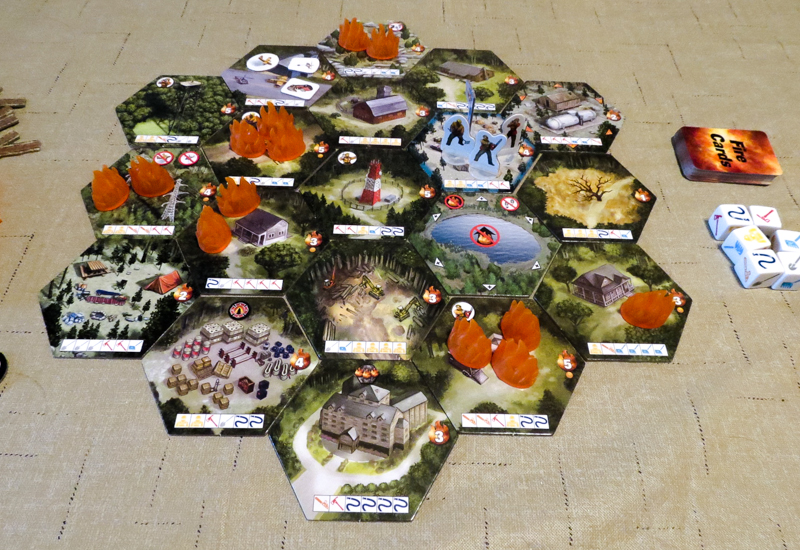 To begin a game of Hotshots, you’ll choose characters, randomly set up the terrain tiles, and then put fire tokens on all of the tiles with the “starting fire” symbol. There is a standard terrain tile layout that you will use for most games, but you also have the option of using one of the six alternate layouts found in the back of the rulebook.

On most turns you will be doing three things: moving, putting out fires, and drawing a fire card. Once you understand how these three things work, you’re pretty much ready to play.

Movement is really simple. In most cases you will be able to move two tiles away from your starting position. However, you’ll have to stop if you are on a tile with fire, and the Rocky Terrain tile requires both of your movement points when entering or leaving.

After you’ve moved, you’ll roll dice to attempt to put out the fire on your tile. You’re trying to match as many of the symbols on your dice to those found on the tile to remove as much of the fire as you can and to get other bonuses. As long as you match one symbol on a roll, you can roll again. However, if you push your luck and fail to match a symbol, your turn will immediately end and you’ll have to add a new flame token to the tile, potentially causing even more problems. 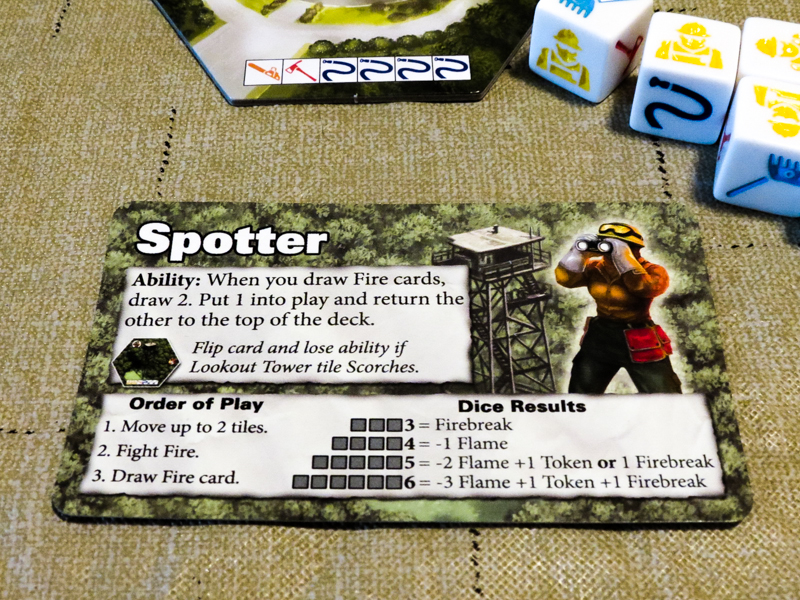 There are a number of ways to get support, which allows you to ignore failed dice rolls. The Lake tile gives support to all adjacent tiles. You can also get one support for each other firefighter on your tile. The last way to get support is by using the reward token that gives you one support.

The more symbols your match on your dice rolls, the better the rewards you’ll get. Three matches gets you a firebreak, which is placed between tiles to slow the spread of the fire. Four matches allows you to remove one flame token. Five matches removes two flames and you can choose between getting a reward token or getting a firebreak. Finally, six matches allows you to remove three flames and you’ll get a firebreak and a reward token. Every reward token in the game is different, from giving you an extra turn to giving you free dice results.

If you land on the Air Attack Base tile, you can choose to use one of the one-time-use vehicles parked there. The air tanker allows you to remove one flame token from three adjacent tiles. You can use the helicopter to remove three flame tokens from one tile. And the brush rig can be used to place three firebreaks in a continuous line.

Each tile has a “scorch limit,” which tells you how many flame tokens can go on the tiles before they get scorched (flipped over). When a tile does get scorched, the fire will spread to another tile adjacent to it. Some of the tiles have extra effects when they get scorched, such as spreading the fire a bit more or even making characters lose their special abilities. If any firefighters happen to be on a tile when it scorches, you’ll lose that many dice (you can gain them back by ending your turn on the Fire Camp/starting tile).

After you’ve moved and fought fires, you’ll draw a fire card. These cards spread the fire in a number of ways. Most of them will tell you to add fire tokens to currently burning tiles, but there are also wind cards that blow the fire to non-burning tiles.

Some of the fire cards even change the direction the wind blows. When you draw one of these cards, you’ll turn the wind marker and all future wind cards will blow the fire in that direction.

You’ll win the game if you finish a turn with no flame tokens on any tiles. You’ll lose if either the Fire Camp tile gets scorched or 8+ tiles are scorched. 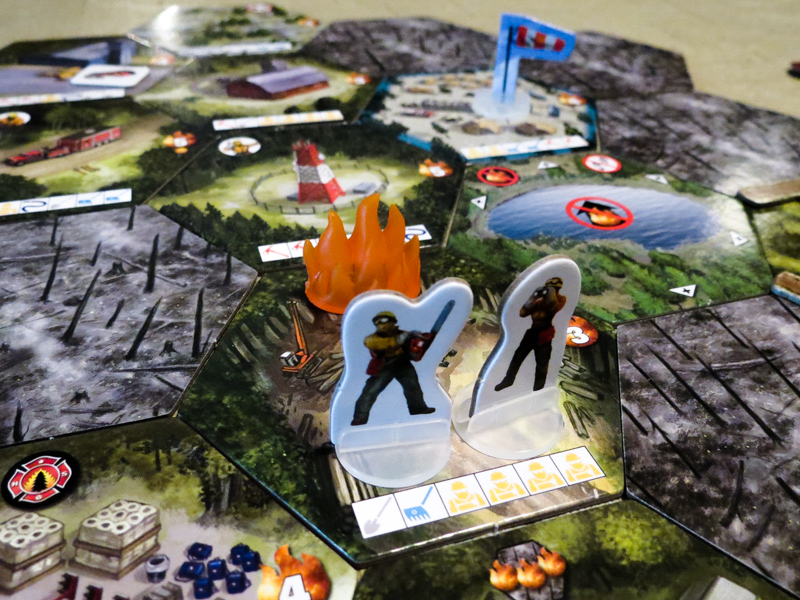 Hotshots definitely rivals Castle Panic (base game) and Star Trek Panic as my group’s favorite game from Fireside Games. It has a good flow to it, it has a theme that just about anyone can get into, and it looks fantastic on the table. Oh, and it usually has some very tense finishes. We’ll be keeping this one since we really like the theme and it’s one of the only good push your luck co-op games out there.

Many people are going to wonder if it’s worth it to get Hotshots if they already own Flash Point: Fire Rescue. Yes, it’s totally worth it. The two games do have firefighting and dice rolling in common, but they feel like two very different games.

If you enjoy dice rolling/Yahtzee-style games, Hotshots is a must have. If you like the firefighting theme and were looking for a new cooperative family game, definitely check this one out.

Thanks for taking the time to read our Hotshots board game review! To stay updated on all things cooperative board games, follow us on Twitter, Facebook, or via RSS.