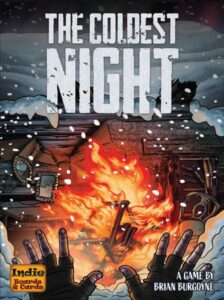 This The Coldest Night review was made after playing the game about 10 times times. We were sent a copy of this game by the publisher in exchange for an honest review.

What is The Coldest Night?

The Coldest Night is a cooperative survival game in which you’re attempting to stay alive by using what you can find to keep your fire lit. The game was designed by Brian Burgoyne and is published by Indie Boards & Cards. 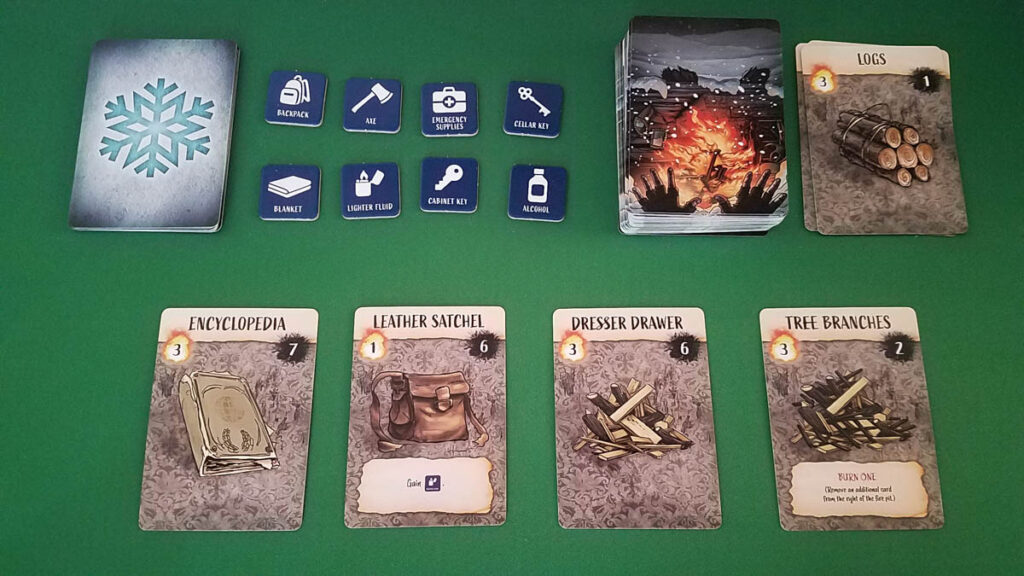 Your job in The Coldest Night is to cooperatively play Kindling cards into the fire pit array so the fire keeps on burning. The problem is that you don’t always have the ideal cards, so you have to find ways to maintain the fire without getting too much frostbite.

Each Kindling card in The Coldest Night has a heat value and an ash value. When you play a card, it is placed to the left of the other cards in the fire pit and it has to have an ash value that is equal to or less than the total heat value of the other cards. You can play multiple cards in a turn, but there can never be more than four cards in the fire pit. If you can’t or don’t want to play a card, your only other option is to scavenge, which allows you to draw three more Kindling cards and give each card to yourself or anyone else on your team.

There are communication restrictions in this game. You can’t talk about the exact values of the cards in your hand, but you can say whether or not you’re going to need the fire to be hotter.

After you’ve played a card or scavenged, the oldest Kindling card (the rightmost card in the fire pit) gets discarded and you check for frostbite. If there are less than three cards in the fire pit, you’ll draw a Frostbite card that will give you some type of restriction until it’s removed/healed; it’s removed if the total heat value of the cards in the pit is exactly equal to the number on the Frostbite card at the beginning of a future turn. You then draw one new Kindling card and the next player takes their turn.

Some Kindling cards have special effects. The Boon cards can allow you to gain new ability tokens or give you more options when you’re removing cards from the fire pit at the end of your turn. The Obstacle cards can force you to remove the best cards from the fire pit or remove multiple cards at the end of your turn. There are also three The Fire Dwindles cards in the deck that are immediately played to the fire pit when they’re drawn and add no heat to the fire (they definitely slow you down).

You’ll win the game if you play every Kindling card to the fire pit. You’ll lose if the fire pit ever has zero cards in it or if you need to draw a Frostbite card and there are none left in the deck. 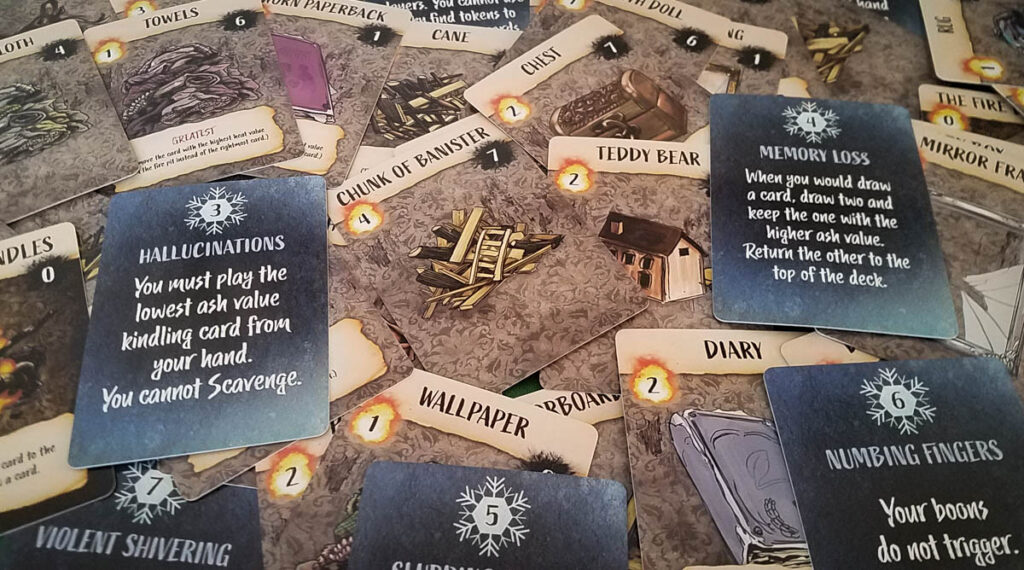 The Coldest Night hasn’t been a big hit with my group, but everyone I’ve played it with so far has enjoyed it. The theme is great, it’s challenging, and it has a different feel to it when compared to other cooperative hand management games. It doesn’t have great replay value, but I’m still going to keep it on my shelf since I think it works well as a filler game and I can teach it to just about anyone.

As a co-op, I think The Coldest Night works best as a two-player game, but I also thought it played well at three (I haven’t tried four-player yet). Its solo variant is arguably the best way to play the game, though, since you have a bit more control over your cards and you randomly remove some cards from the deck each game.

If you like lighter cooperative games and this survival theme seems interesting to you, chances are you’ll be a fan of The Coldest Night.

Thanks for taking the time to read our The Coldest Night review! To stay updated on all things cooperative board games, follow us on Twitter, Facebook, or via RSS.