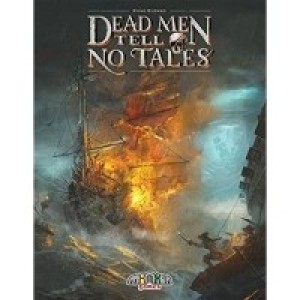 This Dead Men Tell No Tales review was made after playing the game four times.

What is Dead Men Tell No Tales?

Dead Men Tell No Tales takes you to the high seas where you must survive on a burning pirate ship long enough to collect a certain amount of treasure. Each game has fires and undead pirates to deal with along the way, though, so it’s no easy task!

Dead Men Tell No Tales was created by Kane Klenko and is published by Minion Games.

At the start of each game of Dead Men Tell No Tales, a T-shaped, four-space board is put down to represent the ship that the pirates are attempting to loot. Each room on the ship has a different fire level that players need to deal with in order to move around.

Each player starts their turn by revealing a new room, which must be placed somewhere on the ship where there can be a connecting doorway. The space gets a fire die and a skeleton/loot token. The number that shows up on each die is that room’s fire level; the higher the fire level, the worse the fire is in that room.

The pirate players use five action points (and any special abilities) to move around the ship to fight fires, swap items, fight the skeletons and more. If a player chooses not to use all of his or her action points, they are transferred to the next player.

Like many other cooperative games, there is only one way to beat Dead Men Tell No Tales (get all of the loot), but many ways to die:

If you are able to get the amount of loot you set out to get at the beginning of the game, everyone wins! There are a number of ways you can lose, including if the ship blows up, if too much loot is lost, and if you get stuck on the ship.

That is a very brief overview on how to play the game. Check out the official Dead Men Tell No Tales rulebook (PDF) for more details.

Check out Dead Men Tell No Tales on Amazon

Unfortunately my group was a bit underwhelmed by Dead Men Tell No Tales. Some of the mechanics are solid and the artwork is fantastic, but it simply didn’t wow us enough to stay in our game rotation. Some of that had to do with the randomness, but it mostly came down not being very satisfied with the experience once the game was over. It has the feel of games like Flash Point and Pandemic, but just about everyone in my group would rather play those games if we had to choose.

Just because it wasn’t a hit for my group doesn’t mean that your group won’t enjoy it. if you are interested in pirate board games and want a very tough challenge, you might get a kick out of Dead Men Tell No Tales.

Thanks for taking the time to read our Dead Men Tell No Tales review! To stay updated on all things cooperative board games, follow us on Twitter, Facebook, or via RSS.