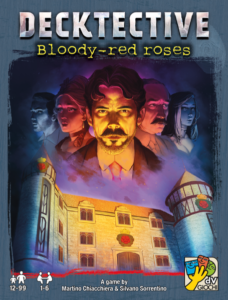 This Decktective: Bloody-Red Roses review was made after playing the game one time (three players). We were sent a copy of this game by the publisher in exchange for an honest review.

What is Decktective: Bloody-Red Roses?

Decktective: Bloody-Red Roses is a cooperative crime-solving game in which you work together to try to find key evidence for your case. The twist is that only you can see the clues in your hand. You have to decide which clue cards are relevant and shown to everyone, and which cards get discarded and never get revealed to your teammates.

Decktective: Bloody-Red Roses was designed by Martino Chiacchiera and Silvano Sorrentino, and it is published by dV Giochi. This is the same group that created the Deckscape series. 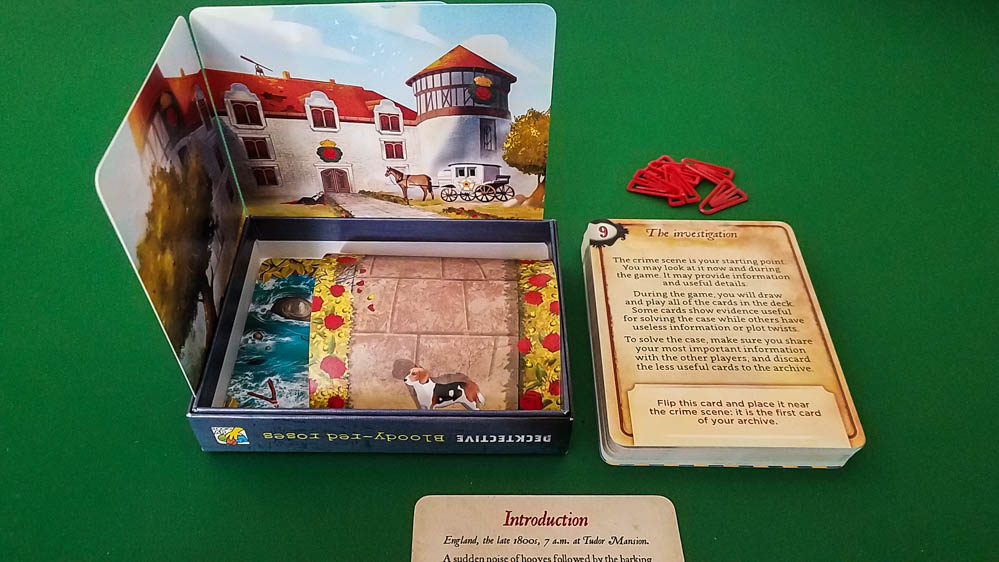 Your goal in Decktective: Bloody-Red Roses is to figure out what happened to Count Ferdinand Tudor, who was found dead in a bush of roses outside of his mansion. After you read the introduction to the case, you’re shown how to set up the 3D crime scene and then you’ll deal out a number of cards based on player count. And that’s about it for setup.

Each card has a value between 1 and 10, which represents the number of cards that have to be in the archive in order to play the card. For example, if you have a card with a 6 showing, you can only play it if there are at least six cards in the archive. If you can’t “afford” to play any of the cards in your hand, you’ll be forced to archive one even if you think it’s potentially relevant to the case.

After all of the cards have been played or archived, you’ll try to solve the case by answering some questions. At this point you can talk about any of the archived cards that you can remember. After you answer all of the questions, you’ll get a score based on how well you answered.

On the overall, I had a good time playing Decktective: Bloody-Red Roses. The 3D crime scene setup was a great idea for this type of game, it plays smoother than other detective games, and that archive/value system brings something new to the genre. This is the easiest crime-solving board game that I’ve played so far, but that didn’t prevent anyone in my group from having a good time. In fact, we all felt a bit smarter afterward since we usually fail miserably when playing these types of games.

If you usually like crime-solving games and/or escape room games, chances are you’ll have a fun time playing Decktective: Bloody-Red Roses. You’ll probably have a better time with it if you play with more than three players, but it’s certainly playable and enjoyable with fewer players.

At this point I like the Decktective system a little bit more than The Sherlock Files system, though they are very similar. I’m looking forward to playing more cases.

Thanks for taking the time to read our Decktective: Bloody-Red Roses review! To stay updated on all things cooperative board games, follow us on Twitter, Facebook, or via RSS.