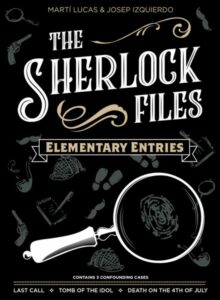 This The Sherlock Files: Elementary Entries review was made after playing through the three cases. We were sent a copy of this game by the publisher in exchange for an honest review.

What is The Sherlock Files?

The Sherlock Files: Elementary Entries is a cooperative deduction game in which you play as detectives who need to figure out the clues that are most relevant to your case and then try to solve the case with the evidence that you gathered. The game includes three unconnected cases: Death on the 4th of July, Last Call, and The Tomb of the Archaeologist. 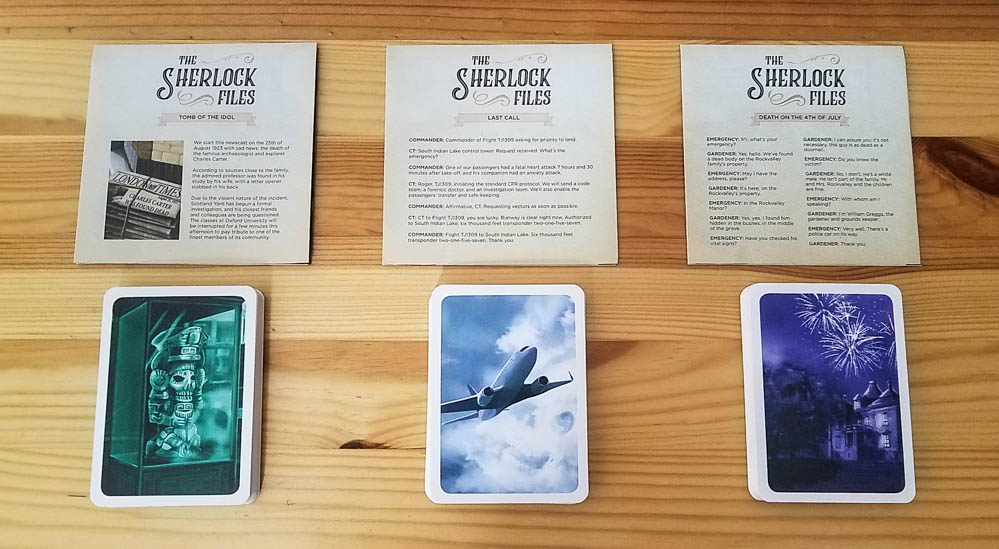 Each case in The Sherlock Files starts with a short case introduction that you’ll read aloud. You then put the first clue card on the table, shuffle the other cards, and deal each player three cards (two cards if playing with 6+ players).

On your turn, you can either reveal a card or discard a card. Revealed cards stay face-up on the table for the rest of the game and discarded cards can never be looked at again. What you’re attempting to do is look through your hand of cards for a clue that is relevant to the case and reveal it. If you don’t have a good clue, you try to find a card that is irrelevant and discard it. After you’ve revealed or discarded a card, you draw a new one and the next player takes their turn.

There is a limit to what you can say to each other throughout the game. You can speak freely about the clue cards that have been revealed, but you’re only allowed to read the underlined or framed text on the cards in your hand. You can’t talk about the discarded clues until the end of the game.

After all of the cards have been revealed or discarded, you discuss your theories and then answer the questions in the case’s questionnaire. You score two points for the questions answered correctly and you lose a point for each revealed card that should have been discarded (irrelevant clues).

The cases in The Sherlock Files: Elementary Entries were hit or miss for my group – one was really good, one was pretty good, and one we didn’t like – but everyone was into each case from beginning to end, which is always a good thing. I think this Q System has a ton of potential and I’m hoping that more cases are released in the future.

While I do think other detective games like Sherlock Holmes Consulting Detective, Deadline, and Chronicles of Crime are better games overall, The Sherlock Files does have some advantages over them. It’s quicker to play, it’s arguably better at higher player counts, and there’s pretty much no chance of an alpha player taking over.

If you like crime-solving cooperative games, I do recommend checking out The Sherlock Files: Elementary Entries. Even if you only end up liking two of the three cases, you will definitely feel like you got your money’s worth.

Thanks for taking the time to read our The Sherlock Files: Elementary Entries review! To stay updated on all things cooperative board games, follow us on Twitter, Facebook, or via RSS.