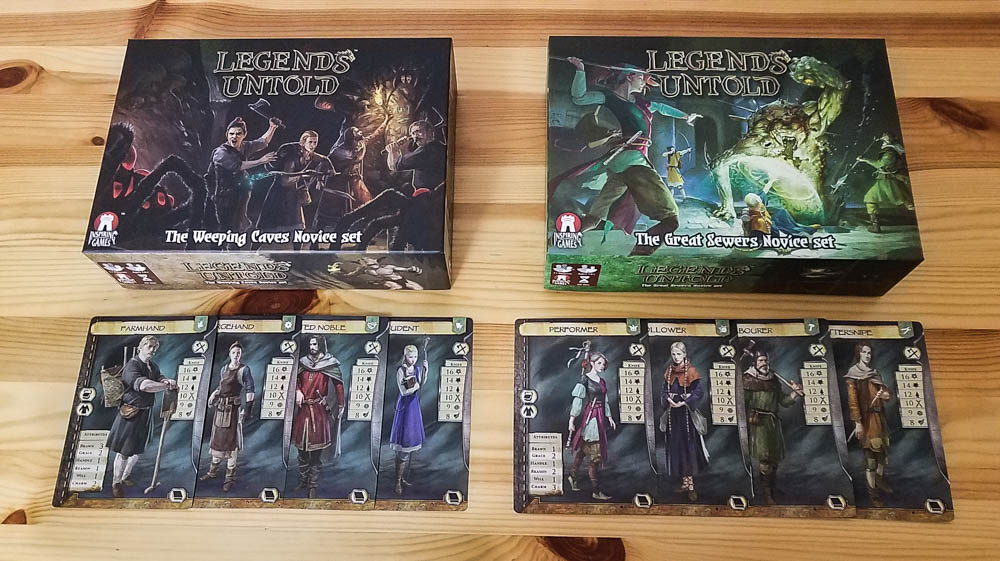 This Legends Untold review was made after playing the game eight times. We were sent a copy of this game by the publisher in exchange for an honest review.

What is Legends Untold?

Legends Untold is a cooperative adventure game in which you’re attempting to lead your people, the Sax, into the city of Dun Morhain after being driven out of your lands by the Newcomers. Your job is to either make it through the Weeping Caves or The Great Sewers, depending on which Legends Untold set you’re playing.

Legends Untold was designed by Kevin Young and Hugh Ducker, and it’s published by Inspiring Games. 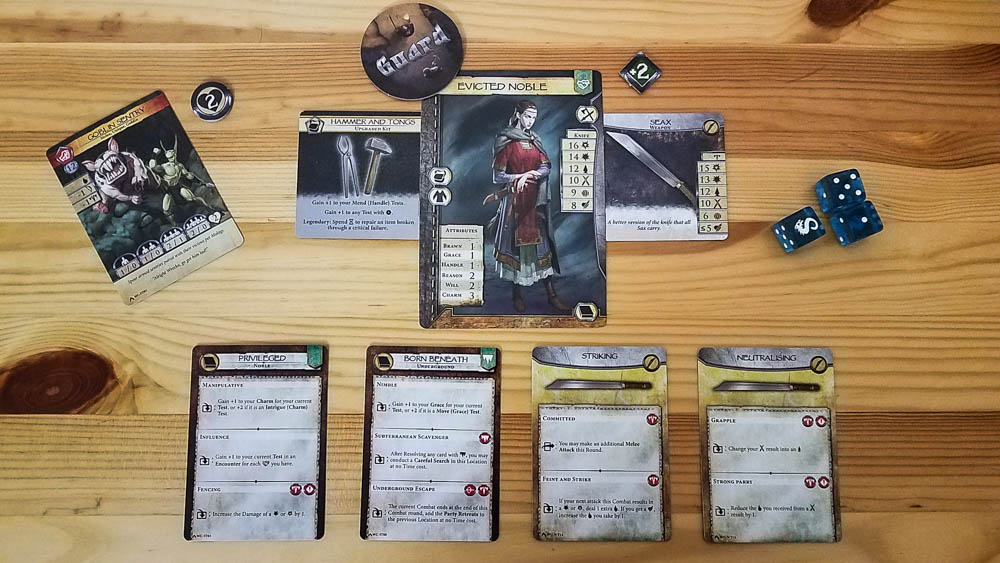 Both Legends Untold sets come with eight-episode campaigns as well as eight scenarios that can be played as one-off games. The adventures in the two boxes play out differently, but gameplay is the same.

The scenario or episode that you’re playing gives you all of the information for setup. It’ll list the number of cards that go into all of the decks, what your goals are, and any other special rules. The main deck is the adventure deck, which includes foes, discoveries, booby traps, and loot. There is also an obstacle deck, a barrier deck, and an event deck.

The event deck acts as the game’s timer. When you spend time, you place the top card of the event deck face-down in a discard pile. Any time you draw the last card of the event deck, it is resolved and removed from the game. If you ever run out of event cards, you can no longer rest at the end of a turn, so you’ll usually only have one or two more turns to try to win.

The heroes have weapons, attributes (like Brawn and Charm), and talents that improve their weapons and attributes. The talents also represent the heroes’ health, so when you take damage, you flip over (“drain”) a talent and will need to heal (by spending time) to get it back. If you ever take damage and all of your talents are already flipped, you become unconscious and will need to wait until the end of the turn to have a chance to heal.

You’re rolling three six-sided dice for pretty much everything in Legends Untold. There are obstacle, discovery, and barrier tests which require one or more heroes to roll and use their attributes to reach specific thresholds. In combat tests heroes roll and look at the table on their weapon cards to see how well they’ve done. Foes have their own unique stats that they’ll use during combat.

You’ll win/advance if you complete the goal of the scenario or episode. You’ll lose if all of your heroes are knocked unconscious. After wins you can level up your heroes by giving them new upgrades (weapons, equipment, and outfits) and new talents. 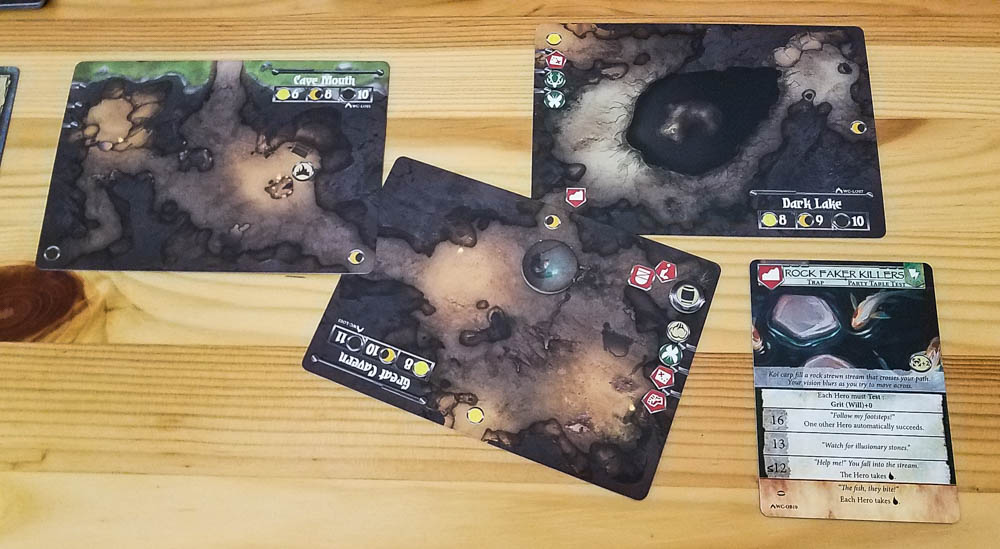 I think that list of cons makes it seem like I haven’t enjoyed playing Legends Untold, but I actually have. My plan was to play it three or four times for this review, but I ended up playing half of the Weeping Caves campaign, one episode of The Great Sewers campaign, and three scenarios from the Weeping Caves. Even though I have seen about 95% of the cards in Weeping Caves now, I’m still looking forward to playing through the rest of its campaign and scenarios. I do think the core games need more cards, though, for more variety and to make the tests more exciting.

I definitely prefer playing Legends Untold as a two-player co-op over the higher player counts. Having two heroes gives you more options for your tests… and I just find it more fun to play through the campaigns with someone else at the table. With more than two you’re really just adding in more enemies and making the game longer.

If you like chucking dice and you like the idea of playing an dungeon crawl-style game that’s quick to set up and quicker to play than most similar games, definitely check out Legends Untold.

Thanks for taking the time to read our Legends Untold review! To stay updated on all things cooperative board games, follow us on Twitter, Facebook, or via RSS.