This The Big Book of Madness review was made after playing the game eight times.

What is The Big Book of Madness?

The Big Book of Madness is a cooperative deck building game designed by Maxime Rambourg and published by IELLO in which players are students of magic who must work as a team to defeat monsters that are coming out of a grimoire. As the monsters are released from the book’s pages, you must use the school’s library to figure out how to deal with their curses.

The Big Book of Madness Gameplay 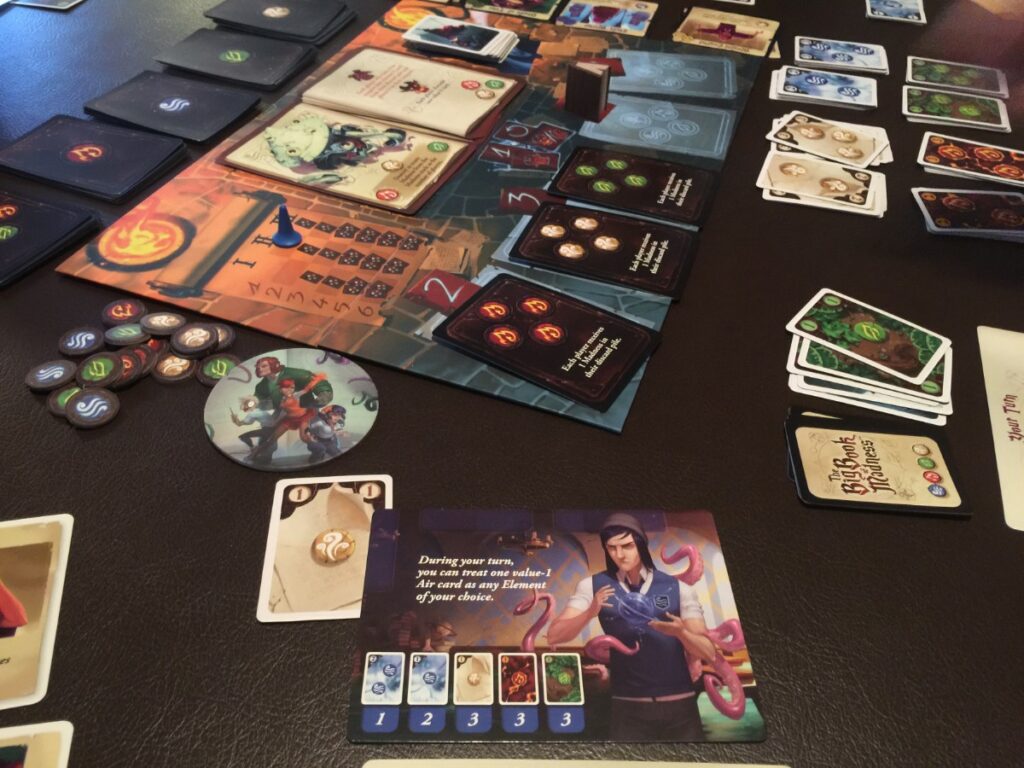 At the beginning of a game of The Big Book of Madness, players get to choose their students. The students start with the same four basic spells, but they also have their own unique starting decks and special abilities.

The Madness deck is your enemy in this game. Some of the monsters (and their curses) will force you to take madness cards, which clog up your deck and slow you down. These cards are tough to get rid of and can’t be discarded at the end of your turn. If you ever end up with a hand full of madness cards, you will be out of the game (because you’ve gone mad!).

You begin each turn with six cards in your hand and you must figure out the best way to use them. During the action phase, you will use your element cards to deal with curses; upgrade your deck with higher-valued elements; cure madness; or learn better spells.

Another option that you have during your turn is to add one of your cards to the support pool. This is a great way to work cooperatively to destroy curses or to get madness cards out of other players’ hands.

The game has six rounds, and in each round players face a different monster with a different mix of curses. You don’t have to defeat all of the monsters, but you do have to beat the last monster in the book. It is pretty much impossible to beat that sixth monster without destroying many of the other monsters’ curses, so you can’t just skip them.

If the players are able to destroy all of a monster’s curses during a round, they will all get a bonus. If they leave even one curse, then they will all suffer the failure penalty.

So, to sum up, there are three ways to lose:

The only way to beat the game is to destroy all of the final monster’s curses.

The Big Book of Madness is a very good co-op deck builder. It has mechanics found in other deck building games, but it also has its on cool twists with the support pools and the fact that you can “pay” for abilities that start out in play. The recommended playing age is 12+, but younger kids could play it if someone goes over each part of their turns with them. It could definitely work as a slightly heavier family game.

I’m going to keep The Big Book of Madness in my gaming rotation because it’s challenging, has fantastic artwork and because it has plenty of replayability. It’s not on my group’s top cooperative board games list, but everyone I’ve introduced it to has enjoyed it; in fact, it’s worked quite well as a gateway game for multiple people.

Update: The Big Book of Madness made it onto our Top 10 Deck Building Games list!

The Big Book of Madness Links

Thanks for taking the time to read our The Big Book of Madness review! To stay updated on all things cooperative board games, follow us on Twitter, Facebook, or via RSS.