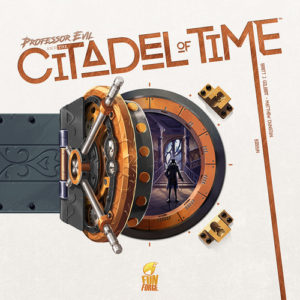 This Professor Evil and The Citadel of Time review was made after playing the game seven times.

What is Professor Evil and The Citadel of Time?

Professor Evil and The Citadel of Time is a cooperative heist game in which you and your team are attempting to get into Professor Evil’s mansion and steal back some of the world’s most important historical treasures. The game was designed by Matthew Dunstan and Brett J. Gilbert, and it’s co-published by Funforge and Passport Game Studios.

Professor Evil and The Citadel of Time Gameplay 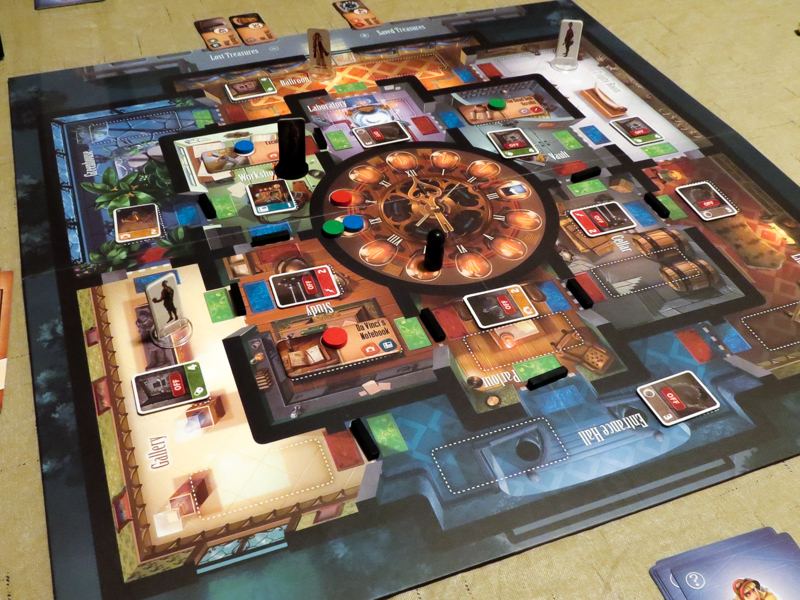 To set up a game of Professor Evil and The Citadel of Time, each player will choose a character and will get that character’s standee, character tile, and a unique deck of cards. You’ll then set up Professor Evil’s mansion, which means randomly placing a switch tile in each room using the Room cards (six switches are turned on, six off), randomly placing three treasure tiles, and placing the 18 locked door pieces in each doorway. You’ll also place Professor Evil himself in his Laboratory.

Your goal in this game is to recover four of those treasures before the Professor is able to stash four of them away forever. You’ll do this by sneaking around his mansion and turning off the required switches so you’re able to grab each treasure. The treasure tiles will tell you which switches need to be flipped, and you need to flip all of the switches of those types.

The clock in the middle of the board tells you how much time you have to save each treasure. The treasure tiles will have a colored marker on them and a marker of the same color will be placed on the clock based on how many minutes are written on the tile. As each turn passes, Professor Evil will get closer to each treasure, so the game is a race to get to each one before he can take them.

At the beginning of each turn, you will draw two action cards from your deck. You can use one of those cards at any point during your turn. Each character has a unique set of skills found on those cards; for example, Nathan Goodspeed, the “Master of Movements,” has cards that allow him to move around the mansion faster than everyone else. 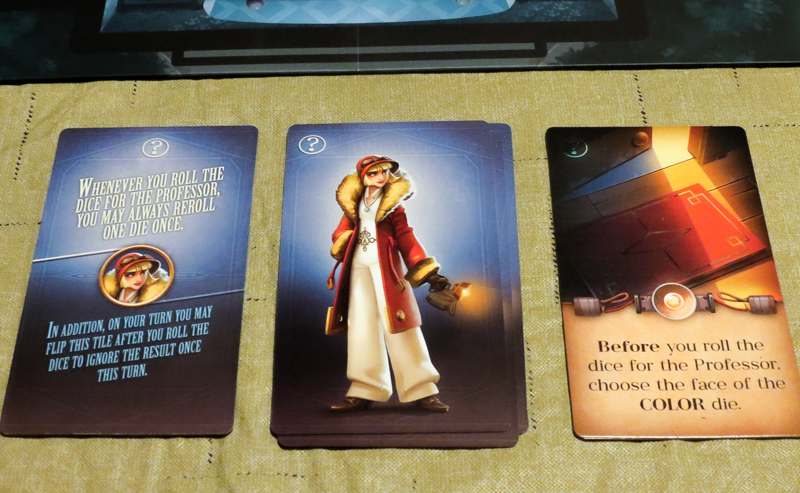 After you’ve drawn your cards, you’ll have three actions you can take. Your action options are: moving, unlocking doors, flipping switches, and rescuing treasures. At the beginning of the game everyone will have to use an action point to move into the mansion through one of the three sets of windows. After that, you’re just moving from room to room. You’ll have to unlock doors to be able to move from one room to another, and you will need to flip switches in those rooms to “Off” in order to rescue treasures. Unless you have an ability that says otherwise, you can’t move into a room the Professor occupies.

When you do rescue a treasure, you’ll place it in the Saved Treasures spot on the board, draw a new treasure, and then draw a Room card to see where that new treasure goes. All of the switches that were turned off to rescue a saved treasure are then turned back on again.

After you’ve taken your actions, Professor Evil gets his turn. You’ll roll three dice, each of which gives you different information.

The two main dice are the Professor and Color dice, which tell you how the Professor will move around the board. For example, you might roll a blue on the Color die and two steps on the Professor die, which means that you move him through the doorways with the blue carpets. When this happens each door the Professor goes through gets locked (if necessary) and the switches in those rooms get turned on (if necessary). 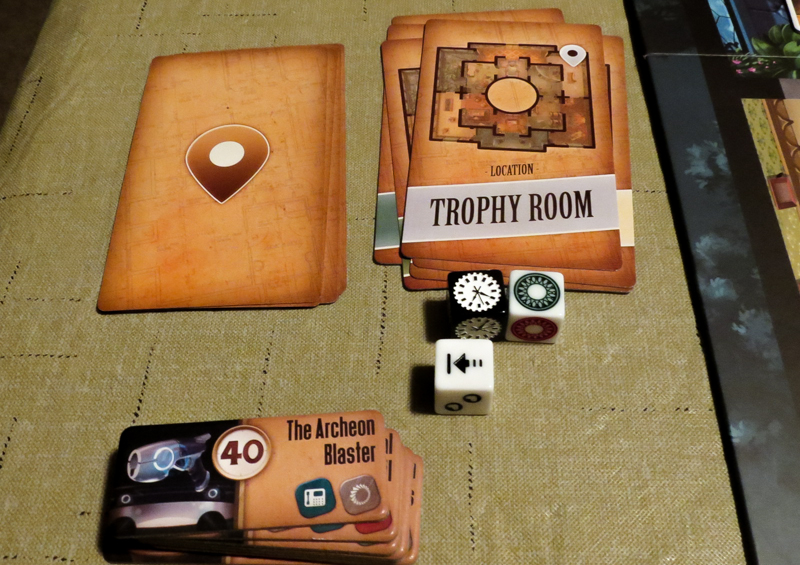 Whenever the Professor enters a room that has a character in it, that character immediately leaves the mansion and must come back in through a window on a future turn.

The Professor die can also show a “5” or a “10” on it. When this happens, the Professor doesn’t move but you do have to move the marker matching the color die counterclockwise, shortening the amount of time you have to save the treasures on the board.

The other die you roll during this step is the Clock die. This simply tells you how far to move the clock marker around the clock. If it moves onto or past a treasure marker, then that treasure is lost. When a treasure is lost, you draw a new Room card and place a new treasure tile in that room.

At the 15 and 45 minute marks on the clock, there are “Idea” icons that benefit the players. When the clock marker reaches or passes one of these icons, one player (the team chooses who) gets to flip his or her character tile over, revealing new abilities. The top-half of the character tile gives an ongoing ability that the player can use once per turn. The bottom-half of the tile gives an even better ability, but the tile has to be flipped over again when that ability is used.

And that’s pretty much all you’ll need to know to play your first game of Professor Evil and The Citadel of Time. Take three actions, possibly use one of your cards, then roll the evil dice. You’ll be spending a lot of time figuring out the best ways to get each treasure, and you’ll often have to sacrifice one treasure in order to get another one. If you can save four of them before Professor gets four, you win! 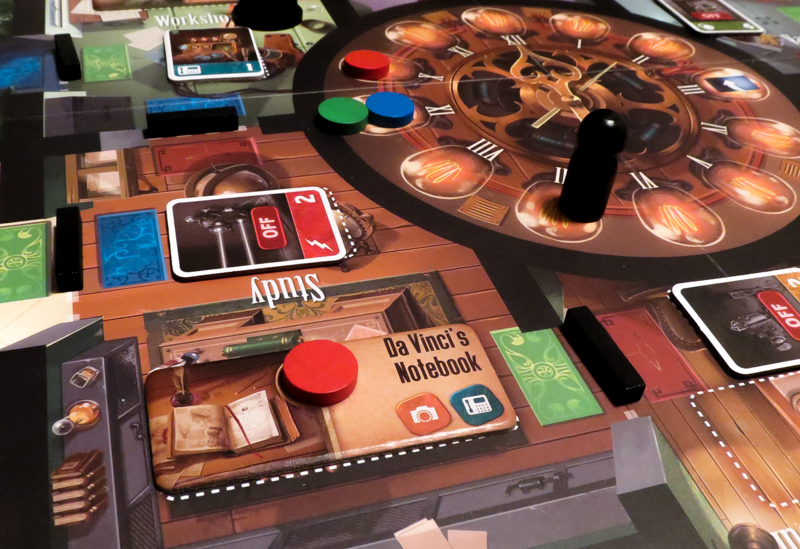 Check out Professor Evil and The Citadel of Time at Amazon

Professor Evil and The Citadel of Time is a very good light-ish cooperative heist game. It’s not going to dethrone Burgle Bros. as my group’s top co-op heist game, but it’s definitely a keeper for now. It has a unique theme, excellent art, and some very cool character abilities. It might not bring a whole lot of new stuff to the table mechanically, but the package as a whole does feel different than any other co-op game I’ve played.

I think most people would get a kick out of this one. It’s a great family game and most adult groups should enjoy it, too. Like I said in the Cons section, though, you should probably pass on it if you have someone in your group who can’t help but take over in games like this.

Update: This game was included in our Best Art list!

Professor Evil and The Citadel of Time Links

Thanks for taking the time to read our Professor Evil and The Citadel of Time review! To stay updated on all things cooperative board games, follow us on Twitter, Facebook, or via RSS.