Skip to content
Co-op Board GamesReviews…And Then, We Held Hands Review 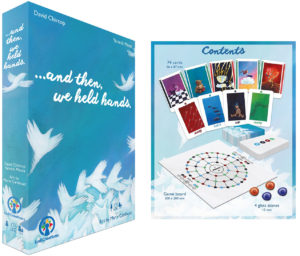 This …and then, we held hands review was made after playing the game five times.

What is …and then, we held hands?

In …and then, we held hands, you and your fellow player are in a failing relationship. You must cooperate in order to achieve emotional balance within and between yourselves. You must work together to overtake objectives together, and hopefully stay together.

This game was designed by David Chircop and Yannick Massa and published by LudiCreations.

…and then, we held hands Gameplay

At the beginning of the game, each player has two tokens. One is on an emotion scale, starting at zero, while the other marks where you are on the board. Players select six cards from the emotion deck, shuffle the objectives deck and make three separate eight-card decks, and begin play.

The catch to …and then, we held hands is twofold. First of all, the players may not discuss the game while playing. That’s right, this is a cooperative game where you must remain entirely silent. Secondly, players can only see and use one half of the emotion cards in front of them and those played by their partner; emotion cards have colors that correspond to movement areas on the board. 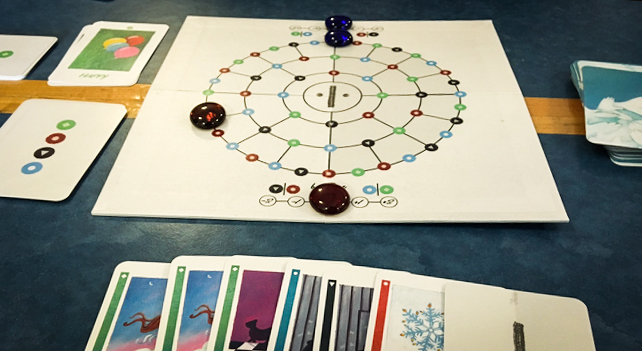 Players discard emotion cards in order to move around the outer circle of the board and must land on the color indicated by the objective card in order to complete the objective. In order to move, players may select cards from either set of emotion cards – theirs or their partners. As players move, their emotional balance scale shifts, and they cannot continue to move if the shift would cause the emotional scale to move past +2 or -2.

Once 8 objectives have been completed on the outer circle, players begin moving in toward the center and must come to the center of the board together in order to win the game.

You will lose if you don’t hit that center mark on consecutive turns; if you don’t have a valid move to make at any point in the game; or if you have no emotion cards in front of you and you have gone through all of the card in the deck.

There are extra cards in the box that have grey bars to indicate that they are of greater difficulty. These cards are only recommended once you have a few games under your belt.

Check out …and then, we held hands at Amazon

…and then, we held hands isn’t going to be for everyone, but it’s a pretty good game overall. It’s great if you want a two-player game that tests how well you can work with someone as teammates, but you absolutely have to be able to get into the theme for it to last more than three playthroughs.

…and then, we held hands isn’t going to make it onto our favorite co-op games for two players list, but most of us think it’s an above-average game.

…and then, we held hands Links

Thanks for taking the time to read our …and then, we held hands review! To stay updated on all things cooperative board games, follow us on Twitter, Facebook, or via RSS.