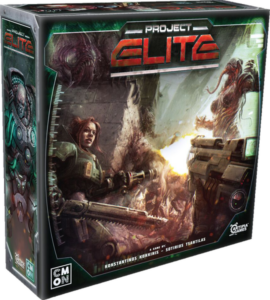 This Project: ELITE review was made after playing the game eight times. This is a review of the base game.

What is Project: ELITE?

Project: ELITE is a cooperative, real-time, science fiction board game in which you attempt to stop a group of invading aliens and complete different missions. This new edition of the game was designed by Konstantinos Kokkinis, Marco Portugal, and Sotirios Tsantilas, and it’s co-published by Artipia Games and CMON. 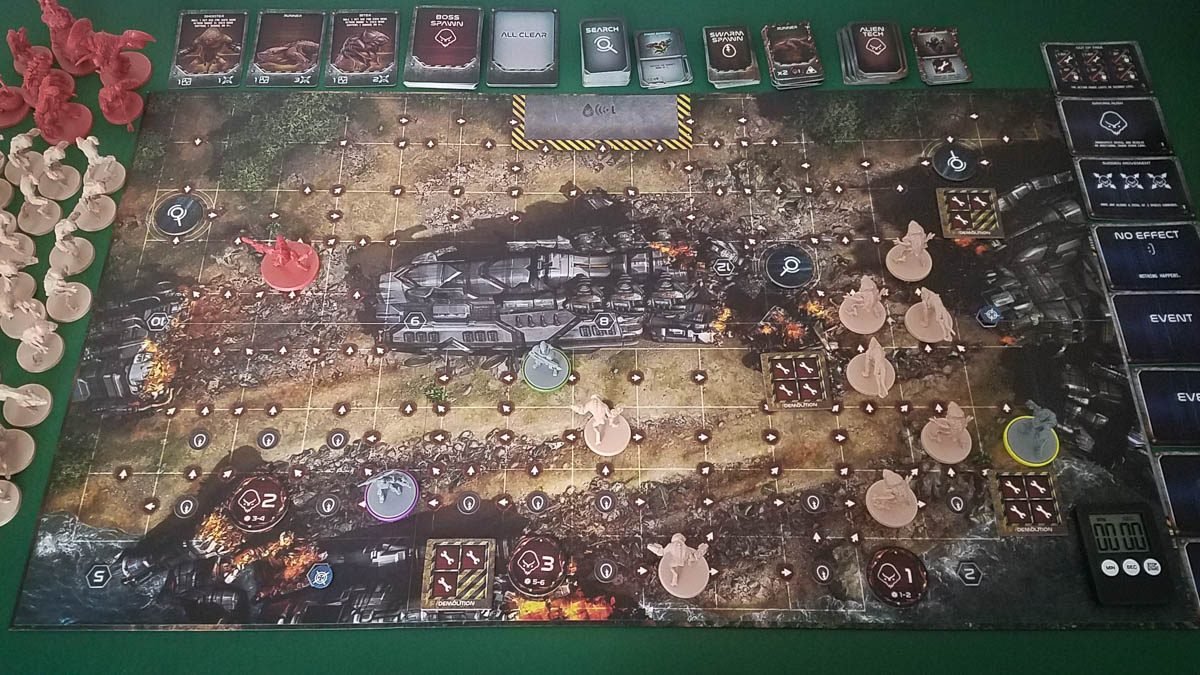 In Project: ELITE, you’ll play up to eight rounds trying to hold off the alien invasion and complete your mission’s objective. The five missions have different objectives, including setting up explosives, capturing aliens, and gathering intelligence. The game comes with two maps and you can play any of the missions on either one.

Each hero has a unique ability and a slightly different health track than the rest. Heroes begin the game with one basic weapon apiece, but you can get more weapons and items as the game progresses. You start out with four Action dice, but when you take damage and pass a damage threshold on your health track, you’ll lose a die until you’re able to heal back up. You take damage when aliens attack you and when they run into/push you.

Each round starts with an Event phase, which might add more aliens to the map, move the aliens closer to your starting area, or you could get lucky and draw a “No Effect” card. All of the event cards with ongoing effects stay in play until you clear them by allocating dice to them.

After the Event phase, you go through the Alien Spawning phase by drawing a number of alien cards, including boss cards, based on the number of players and the difficulty level. This will put more aliens on the map at one or more of the three spawning zones and sometimes those aliens will move and/or attack right away. 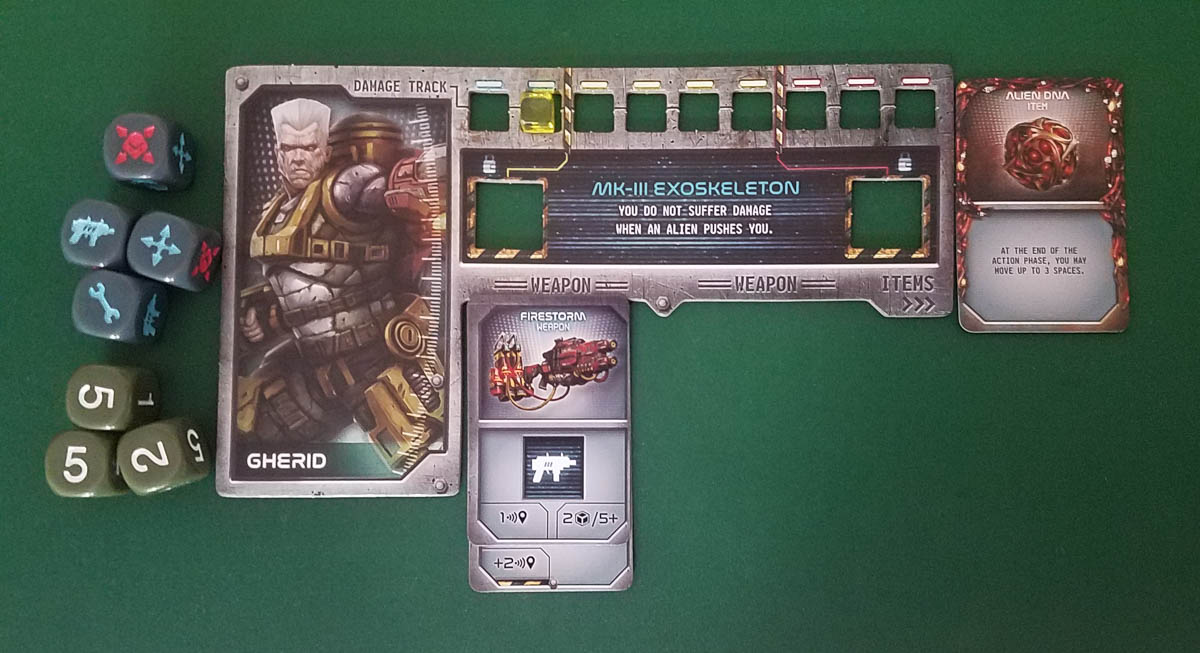 The Action phase is the main part of the game. You usually have two minutes to roll your Action dice and use the symbols to do different types of actions. You can use the dice to move around, activate weapons and attack nearby aliens, search for items, resolve ongoing events, and complete objectives. Whenever you roll the red Alien Movement symbol, you move any alien closer to your starting area (using the alien paths printed on the board). Unless your dice are locked on a card or objective token, you can continue to roll and use them until time runs out.

The round ends with each alien on the map activating (moving, attacking, etc.) and then players getting their locked dice back. You’ll then move on to the next round unless you’ve just won or lost.

You’ll beat a mission if you complete its objective and get back to the starting area. You’ll lose if you don’t complete the objective within eight rounds, if any hero loses all of their health, or if an alien makes it to your starting area. 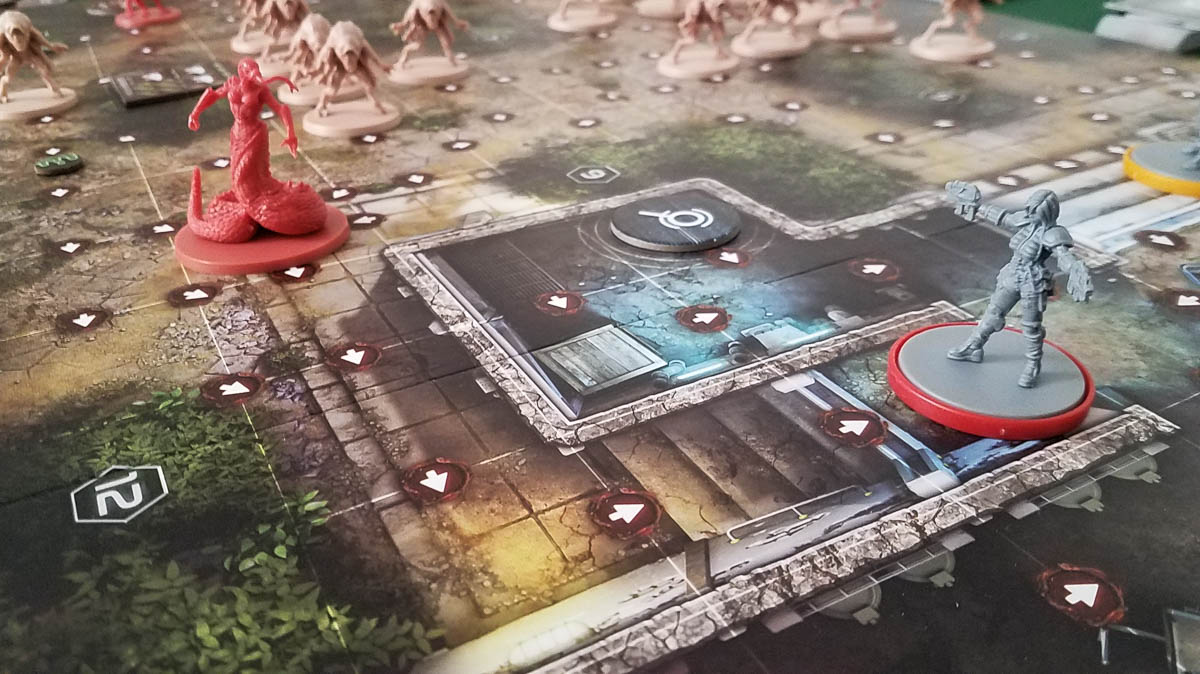 I think Project: ELITE is a fantastic real-time game. It was my second-most anticipated co-op of 2020 (behind only Sleeping Gods) and it has met my very high expectations. It’s surprisingly easy to learn and play, it’s about as exciting as board games get, and just about every game has two or three memorable moments. I’m not sure if I’d rank Project: ELITE above 5-Minute Dungeon, but it’s definitely one of the best real-time cooperative games that I’ve played.

I’ve enjoyed playing Project: ELITE at the two, three, and four-player counts, but I definitely preferred the three and four-player games (it’s best at four, in my opinion). Two-player is good, but you don’t get to team up as much. I’m thinking it’d also be fun at five and six, though possibly a little too chaotic.

I think it’s important that I point out that Project: ELITE will be too stressful for some people. Even some people who have liked other real-time co-ops might find this to be a bit too much. One person in my group said that he enjoyed the game, but he just couldn’t keep his thoughts straight during the Action phases and he ended up with a pretty major headache after two games. And that makes sense since you are moving your eyes a lot and rolling those dice a ton. It’s a lot of noise, a lot of moving, and a lot of thinking.

If you don’t think it’d be too stressful for you and your group, I absolutely recommend playing Project: ELITE. It’s awesome.

Update: Project: ELITE made it onto our Top 40 Cooperative Board Games list!

Thanks for taking the time to read our Project: ELITE review! To stay updated on all things cooperative board games, follow us on Twitter, Facebook, or via RSS.