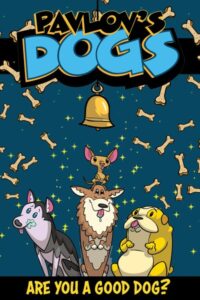 This Pavlov’s Dogs review was made after playing the game seven times. We were sent a copy of this game by the publisher in exchange for an honest review.

What is Pavlov’s Dogs?

Pavlov’s Dogs is a cooperative memory game in which you play as dogs who have to add up the values of cards while also remembering the different rules that your Dogtor has given you. The game was designed by Heather O’Neill (Meeple Party) and it is published by 9th Level Games. 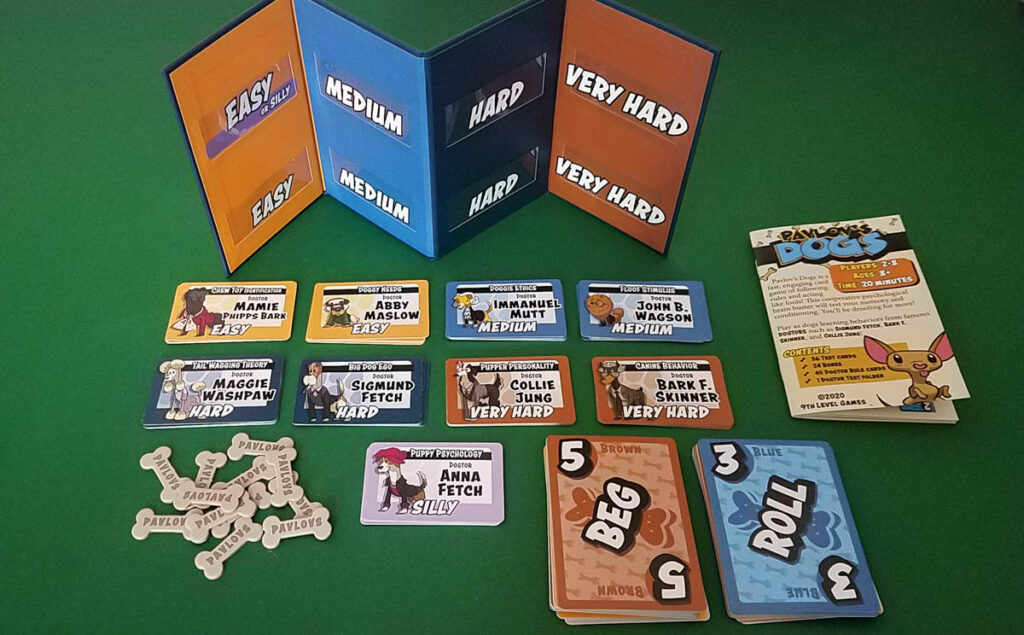 In Pavlov’s Dogs, each player gets three bones to start with and your goal is to make it through a number of rounds (based on the difficulty level you chose) without anyone running out of bones. You’ll get a score based on how many bones your team still has at the end of the game.

One player is the “Dogtor” each round while the other players are the dogs. The dog players all have five Test cards and they take turns revealing cards from their decks until everyone is out of cards. On your turn, you reveal a card, add it to any previously played cards, and then say the total value of those cards.

At the beginning of each round, the current Dogtor reveals one new Rule card and then hides it behind the Test Folder screen. The Rule cards change the rules for the current round and all future rounds. For example, one Rule card has the dog players bark whenever a “Speak” card is played, so if you played that card and the total of all of the cards on the table was 12, you’d have to make a barking sound before saying “12.”

After you complete a round, you can redistribute bones (you usually do this so everyone has at least two bones), and then a new player becomes the Dogtor and they reveal a new Rule card. The game gets tougher the more rounds you play since you have to remember the new rule and all of the rules from the previous rounds.

There’s also a Team vs. Team variant, which is basically the exact same game except both teams get their own sets of Rule cards and the team with the most bones remaining at the end of four rounds wins. 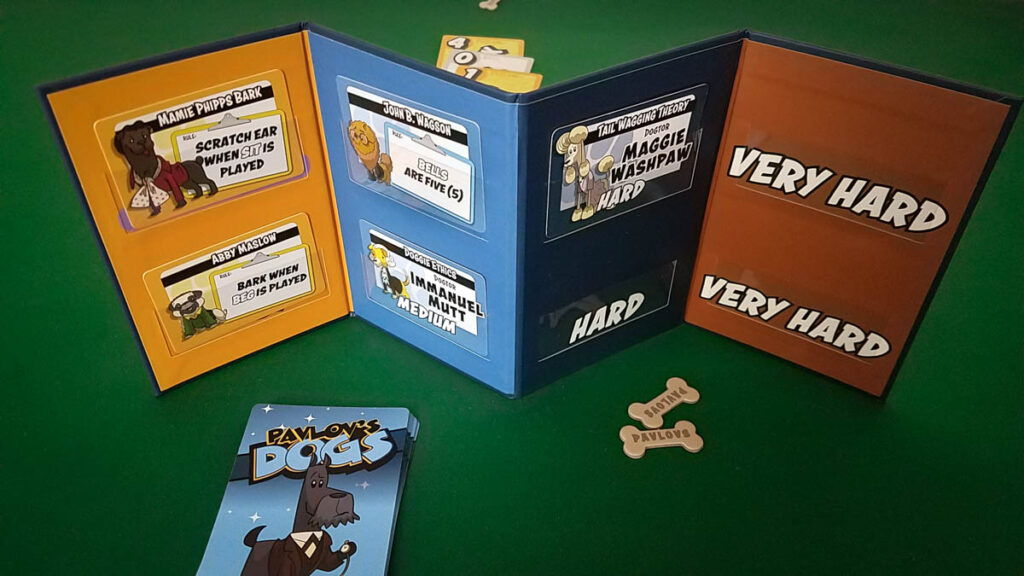 I’m definitely going to be keeping Pavlov’s Dogs. It’s a very clean design, it’s quick, it’s challenging, and, most importantly, it’s a unique co-op experience. It’s very possible that this game made me laugh more than I ever have while playing a board game, and everyone I played it with was fully engaged throughout (well, other than during that quick two-player game).

If you like lighter co-ops, definitely check out Pavlov’s Dogs. I’d also recommend it to anyone looking for a cooperative game that they can break out with pretty much any crowd because it does work with gamers of all ages and different group sizes.

Thanks for taking the time to read our Pavlov’s Dogs review! To stay updated on all things cooperative board games, follow us on Twitter, Facebook, or via RSS.