Skip to content
Co-op Board GamesReviewsDawn of Peacemakers Review 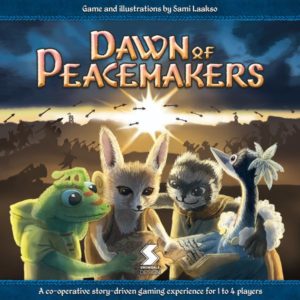 This Dawn of Peacemakers review was made after playing six of the 12 campaign scenarios. We were sent a copy of this game by the publisher in exchange for an honest review.

What is Dawn of Peacemakers?

Dawn of Peacemakers is a cooperative campaign board game in which you play as a group of adventurers attempting to stop a huge war from breaking out between the scarlet macaws and the ocelots. It’s set in an alternate universe in which humans never existed and “animalfolks” rule.

Dawn of Peacemakers was designed by Sami Laakso and is published by Snowdale Design. 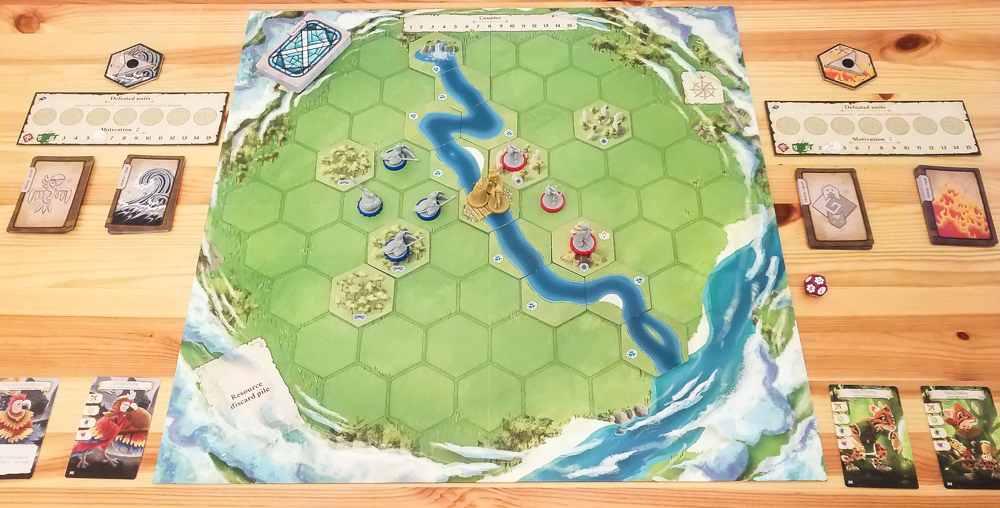 In Dawn of Peacemakers, you’ll be playing through a campaign and attempting to keep animalfolk armies from destroying each other one battle at a time. During each scenario, you’ll be moving around the battlefield trying to keep one army from dominating by influencing their actions and, hopefully, bringing each army’s motivation low enough so the battle will end. In some cases you’ll want to put the underdog in a better position to strike, while in other situations you might want to move a unit away from the action.

There are three phases in each round:

The resource cards that you’ll have can be used in multiple ways. You can look at and possibly reorder cards in the order decks; deck manipulation is the main mechanic in this game. You can also move around the battlefield, use fortification tokens to protect specific locations, or you can use a resource card’s special abilities. You can play as many cards as you want to on your turn, but each card is only used for one of its actions and is then discarded. 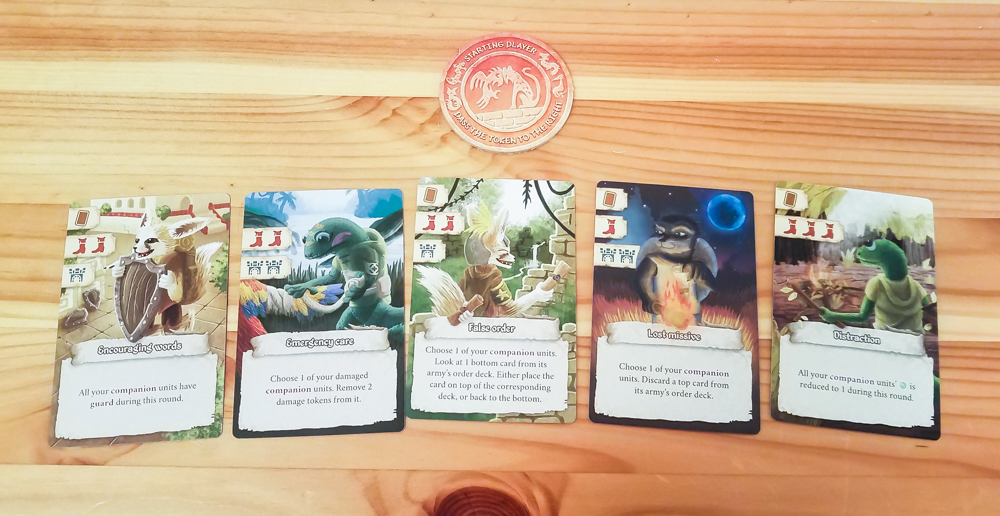 The Army phase is when all of the action goes down. Armies will move, protect themselves, or attack the other armies. Of course, your job during the Adventure phase is to do the best you can to control where the action takes place. 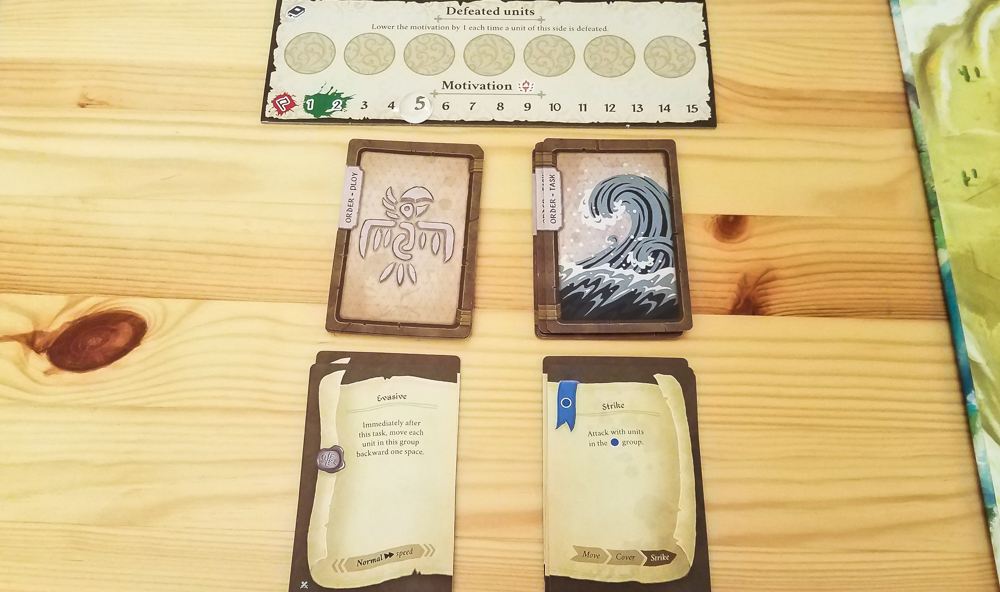 Resolving move and attack actions is pretty simple. Each army has a Frontline Sign that tells you their preferred direction for movement and attacks. When attacking, units will want to attack the closest enemies in the direction of their Frontline Signs and within their range. There are helper cards included in the game that can help you figure out enemy prioritization when there are multiple targets.

Each animalfolk unit has stats and possibly a special ability. If a unit is attacked and takes damage, you’ll place damage tokens next to them on the board. If their damage meets or exceeds their health stat, they are removed from the board and that army’s motivation goes down by one.

Each scenario will tell you how you win and lose; you’ll always lose if an army’s last leader is killed. If one of the game-end conditions is met at the end of a round, you’ll read the story text in the campaign book before moving on to the next scenario. Each new scenario can add in more campaign content.

The campaign is the main way to play Dawn of Peacemakers, but you can also play any of the scenarios as one-off games and there is a full competitive Skirmish mode included in the box as well. 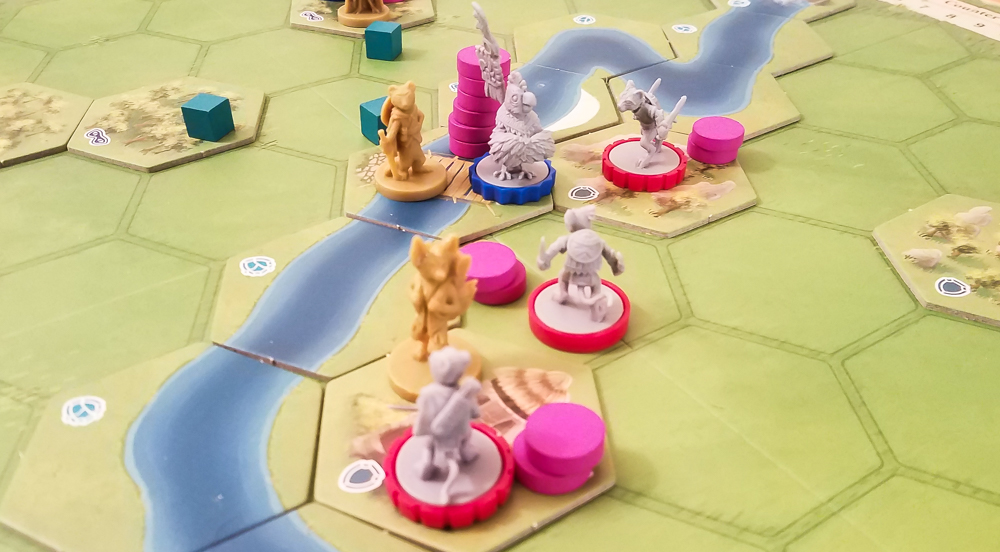 Dawn of Peacemakers is unlike any co-op game I’ve played before and it absolutely met my high expectations. The text in the campaign book and the battles themselves help to create this very unique and memorable story, and I’m a huge fan of the all-around look of the game. My group has only played half of the campaign so far and we’re definitely looking forward to seeing how the story plays out and the different challenges each scenario will bring.

I can’t think of any games to compare Dawn of Peacemakers to, but I will say that you should give it a try if the theme interests you. If you think your group will enjoy playing through a campaign in which you’re trying to stop a huge war from breaking out between two groups of animals, get this game.

UPDATE: Dawn of Peacemakers made it onto our Best Cooperative Board Games of 2018 list!

Thanks for taking the time to read our Dawn of Peacemakers review! To stay updated on all things cooperative board games, follow us on Twitter, Facebook, or via RSS.