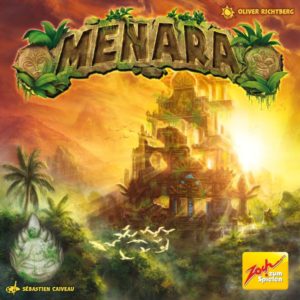 This Menara review was made after playing the game nine times. We were sent a copy of this game by the publisher in exchange for an honest review.

Menara is a cooperative dexterity game in which you’re attempting to reconstruct an ancient temple by building it up a certain number of levels. You’ll do so by placing columns on temple floors and hoping it doesn’t fall over before the game ends.

Menara was designed by Oliver Richtberg and is published by Zoch Verlag. 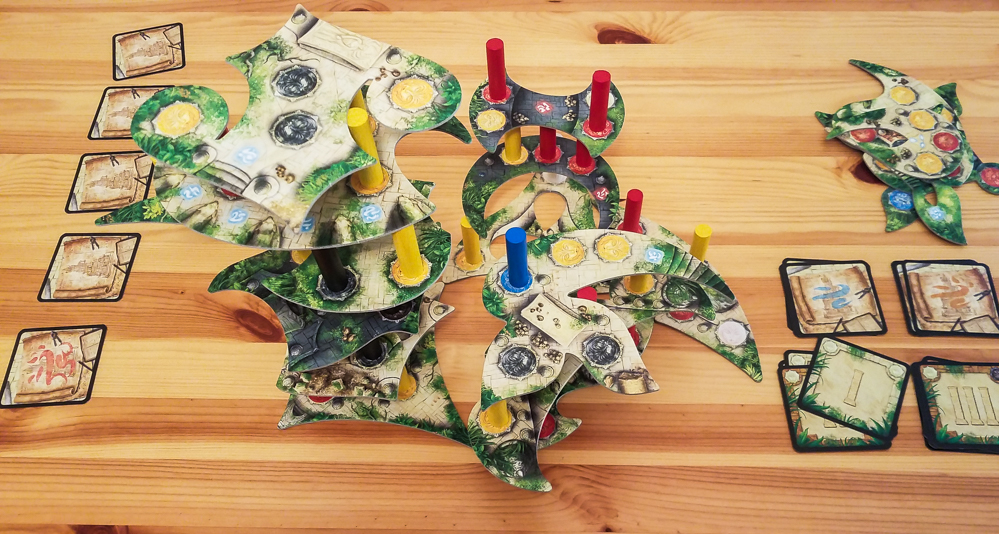 The goal in Menara is to have your temple built up to a certain level by the time the game ends. You’ll do this by looking at construction plan cards, placing or moving columns based on the images shown on those cards, and by adding additional floors to your temple.

The amount of columns you’ll have each turn is based on the difficulty level you choose; the more columns you have, the easier the game is going to be. You’ll also start out with an easy, medium, or hard amount of temple levels that need to be built by the end of the game, though that can change as the game progresses.

Each temple floor tile has a number of colored bases. Columns are always placed on their matching bases.

When you place the last column on a temple floor, you’ll draw a new temple floor off of the stack and place it on top of columns or add it to the base of the temple. If you do place it on the base level, you’ll add the current construction plan card to the level cards to indicate that your temple has to be one level higher at the end of the game. You also add to the level cards whenever you can’t complete a construction plan card.

You’ll lose the game if the temple ever collapses. The game can also end when the current player can’t draw enough columns to have a full “hand,” if the last construction plan card is played, or when the last temple floor has been placed. When one of those three end-game conditions is met, you’ll win if your temple is as high as or higher than the number of level cards on the table. 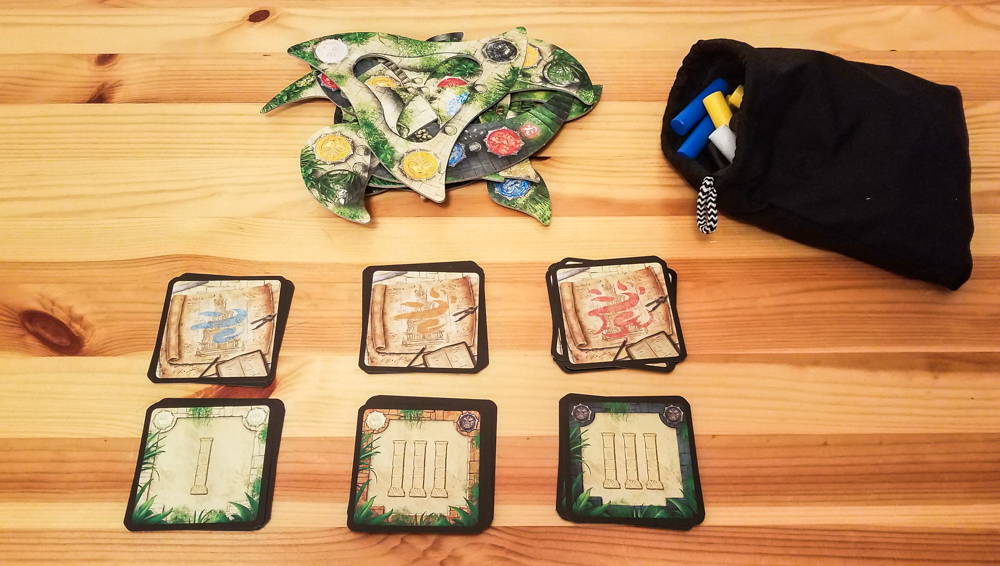 Menara is so much more than just another stacking game. It’s tough to beat, there are plenty of interesting strategic decisions that need to be made, and it has a great look to it. I’m pretty bad at this game, but I’ve had a really good time playing it each time it’s hit the table. Menara is staying on my shelf because there aren’t that many good co-op dexterity games out there yet and it’s a unique experience.

If you enjoy playing dexterity games, chances are you will be a fan of Menara. It works equally well as a family game and as a nice change-of-pace game for adult gaming groups, so plenty of people will get a kick out of this one.

Update: Menara made it onto the Best Cooperative Board Games of 2018 list!

Update 2: It was also included on the Top 10 Family Games list!

Thanks for taking the time to read our Menara review! To stay updated on all things cooperative board games, follow us on Twitter, Facebook, or via RSS.

Choose Your Own Adventure: House of Danger Review
Cities: Skylines – The Board Game Review
The Ravens of Thri Sahashri Review
After The Virus Review
Follow us: