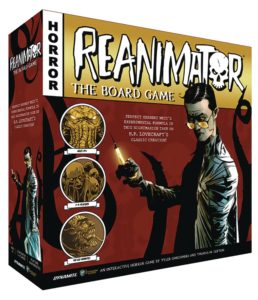 This ReAnimator review was made after playing the game seven times. We were provided a copy of this game by the publisher in exchange for an honest review.

Set in H. P. Lovecraft’s city of Arkham, ReAnimator is a cooperative mystery-storytelling game in which you are attempting to help inventor Herbert West perfect his reanimation serum. It is based on the very popular short story of the same name, which was later turned into a film series.

ReAnimator was designed by Thomas M. Gofton and is published by Dynamite Entertainment and Lynnvander Productions.

There are six Serials (rounds) in each game of ReAnimator and each Serial is made up of a number of Subplots based on the number of players. The goal is to help keep Herbert West sane and healthy through the six Serials and to perfect the reanimation serum at the end of the final Serial.

On a player’s turn, they will read through three Subplot cards, starting from Act I and ending on Act III. These cards have story text that the current narrator will read and they will usually give the players options that have both benefits and hindrances. The option you choose will also tell you the type of card you need to draw from the next Act, so you will keep drawing from the next Act’s deck until you find that type of card (or a wild card).

After you have read through the three Subplot cards, each player will move Herbert West to one of the eight buildings and take the action shown on top of the building. You can gain cadavers, which you will need at the end of the round when you’re attempting to perfect the serum. You’ll also want to get ingredients to make perfecting the serum easier. Tomes allow you to roll fewer dice (more on that below). And you can also regain health and sanity at multiple buildings. 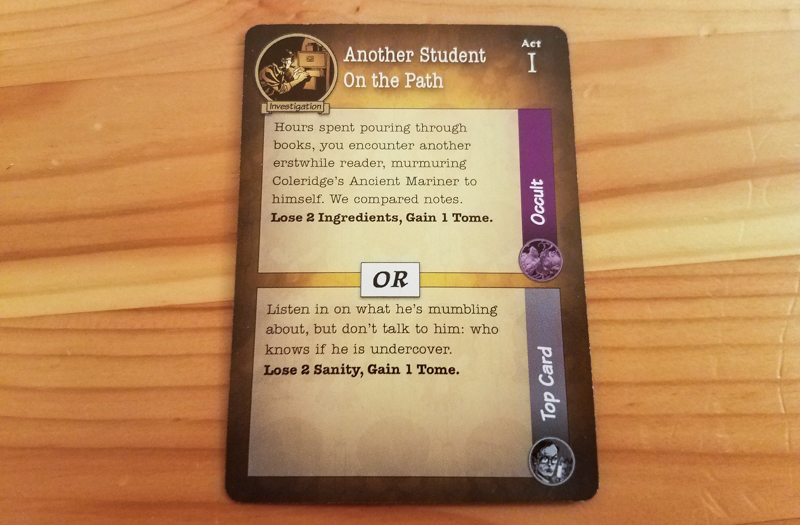 At the end of the each Serial, you have to attempt to perfect the reanimation serum. You’ll have to have at least one cadaver or else you’ll automatically fail. What you’re trying to do is roll dice and have the combined result be less than the number of ingredients you’ve “spent.” By default, you are rolling a number of dice equal to the number of players, but you can spend tomes equal to the number of players for each die you want to remove. You’ll simply move forward in the story if you succeed, but if you fail you will have to lose some sanity and/or health.

You’ll win the game if you’re able to perfect the serum at the end of the sixth Serial. You’ll lose if that last experiment fails or if you run out of health or sanity at any point during the game. 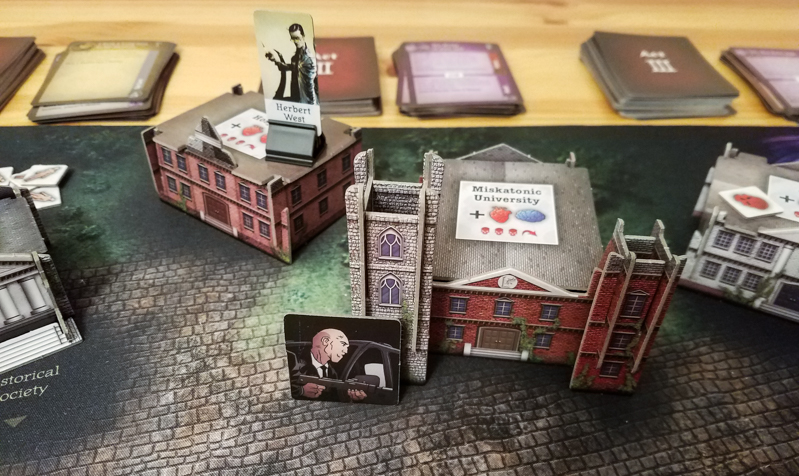 ReAnimator isn’t a game for me since I’m not really into this theme, but I think it’s a good one for people who collect H. P. Lovecraft board games. It’s light enough to be a family game and I think a lot of people will enjoy experiencing the different stories that develop through those Subplot cards. If you’re already a fan of the ReAnimator short story and/or movies, well, this game was made for you.

Thanks for taking the time to read our ReAnimator review! To stay updated on all things cooperative board games, follow us on Twitter, Facebook, or via RSS.