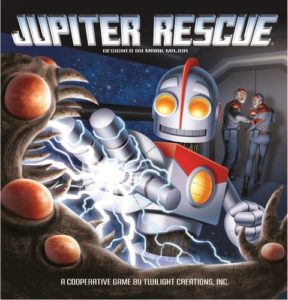 This Jupiter Rescue review was made after playing the game six times.

What is Jupiter Rescue?

Jupiter Rescue is a cooperative strategy game in which you play as robots on a colony called Jupiter Deep attempting to save human colonists from an alien invasion. Jupiter Rescue was designed by Mark Major and published by Twilight Creations. 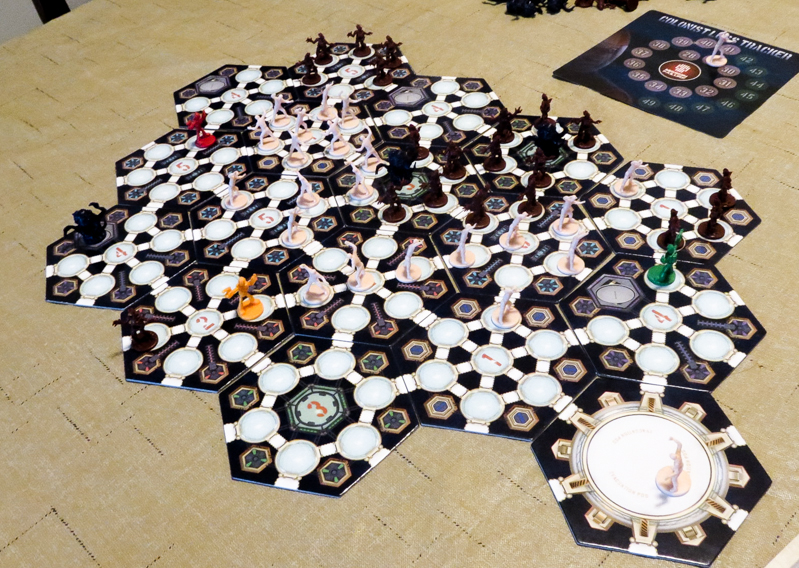 To begin a game of Jupiter Rescue, you’ll lay out 19 tiles and put colonist figures on all available spots on the middle seven tiles. The team will choose where to place the Evacuation Pod. After picking robots to play with, everyone will place their robots in the Evacuation Pod and draw two Rescue Cards. You’ll choose one of those two cards to be your core special ability, which you’ll keep for the entire game (unless a card allows you to switch it).

Throughout the game you’re going to be trying to move colonists onto the Evacuation Pod and ship them off to safety. The aliens, called Creeps in this game, will be attempting to move onto the ship and convert those colonists into even more Creeps.

You’ll have a chance to take five actions on each turn. Your action options are moving, attacking Creeps, moving colonists toward the Evacuation Pod, and trading cards with other players. You can use any action any number of times.

As long as you have a bridge to move on, you can always move to an open adjacent space. The trick is to move to spaces that are out of the way of colonists so you don’t block their path to the Evacuation Pod.

Attacking is extremely easy to understand. You can only shoot Creeps that are on your tile unless you have a card that gives you another way to kill them. When you shoot a Creep, it is removed from the board.

Moving colonists is also very simple. You can move any colonists that are on your tile or an adjacent tile as long as they have an adjacent space to move to. Once you get a seventh colonist onto the Evacuation Pod, it blasts off and those colonists are saved. By default the player who launches the Evacuation Pod will have to wait until their next turn to connect it to the colony again.

At any point during your turn you can use one or more of your Rescue Cards, including the card you chose to use as your core ability. These cards can help you move faster, kill Creeps easier, or they can even be combined together. The cards tell you which actions to use them with and how long the effects last. 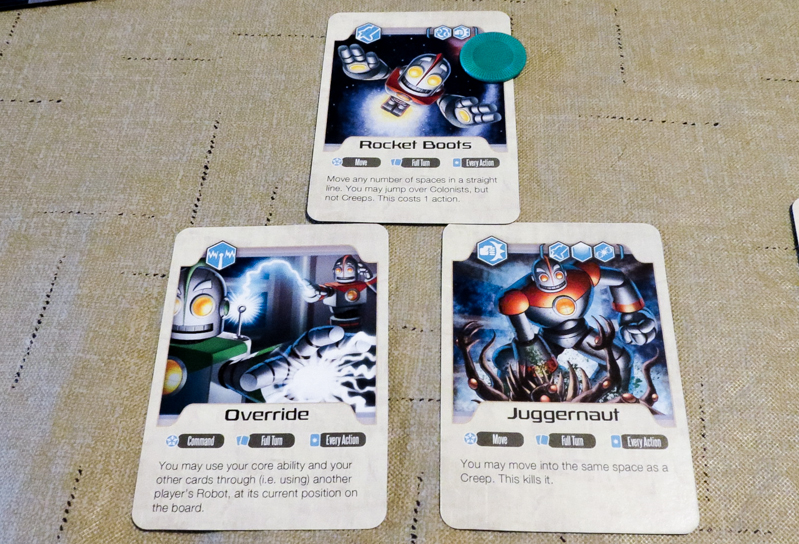 After you do your actions, the Creeps get their chance to fight back…

During the Conversion phase, any colonists that are next to Creeps become Creeps themselves. As you lose colonists this way, the level on the Colonist Loss Tracker moves forward, bringing you closer to a loss. If it ever reaches Mission Failed, everyone loses.

After the Creeps are done doing their damage, then you get to draw two new Rescue Cards.

For every Super Creep in a Power Plant, the hand limit (normally 4) is reduced by one. If there are any Super Creeps in Command Dishes, everyone loses one action per turn. You can kill Super Creeps the exact same way you kill regular Creeps.

You win when you get 28 colonists off of the colony safely and also get all of the robots back to the Evacuation Pod. 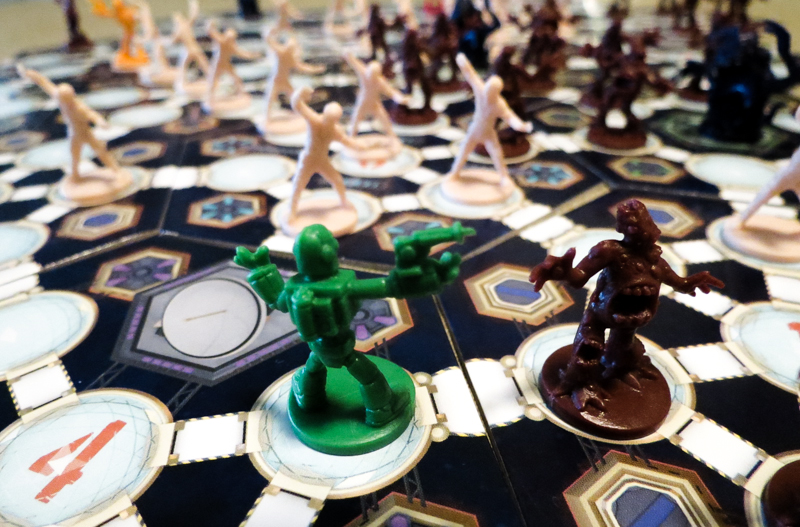 Check out Jupiter Rescue at Amazon

I wouldn’t say there’s anything extremely special about Jupiter Rescue, but it is a solid little family co-op that most of the people in my group have enjoyed playing. It has a cool theme, a unique look, and it plays differently than any other cooperative board game I’ve played. I’m glad I took a break from all of the newer games to give this one a try.

I’m not going to recommend Jupiter Rescue to everyone since there are so many great cooperative games out there to choose from these days. People who should get this one are those who are interested in the theme or just really love co-ops and want to try something a little different.

Thanks for taking the time to read our Jupiter Rescue review! To stay updated on all things cooperative board games, follow us on Twitter, Facebook, or via RSS.