Skip to content
Co-op Board GamesReviewsMole Rats in Space Review 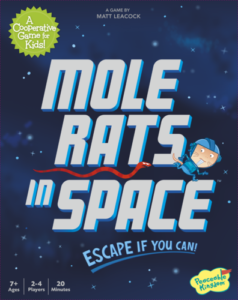 This Mole Rats in Space review was made after playing the game six times.

What is Mole Rats in Space?

Mole Rats in Space is a cooperative board game for kids in which you are mole rats attempting to flee the snakes that have invaded your space station! The game was designed by Matt Leacock (Pandemic, Forbidden Island) and is published by Peaceable Kingdom. 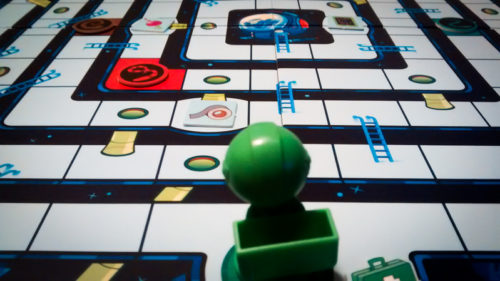 Setting up the Mole Rats in Space board is extremely simple – put the board in the middle of the table, then place the four snakes and four equipment pieces on their matching spaces. Everyone will get a mole rat of their own, a med kit, and their first card. Then you’re ready to go!

On your turn, you will do whatever the picture on your card says to do. Actions include moving yourself, moving everyone in your group, moving the snakes, and adding more snakes to the board. Most cards have a top half and a bottom half, with the top being the team’s actions and the bottom being the snakes’. 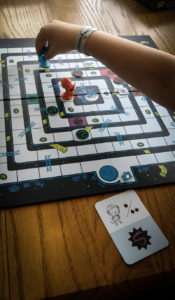 If you ever run into a snake (or a snake runs into you), then you will want to use your med kit to heal up. You only get one med kit, though, so you have to avoid that second bite!

Once you’re able to beat the game three times, you can crack open the Challenge envelope, which will add cards to the game that will make it a bit tougher. 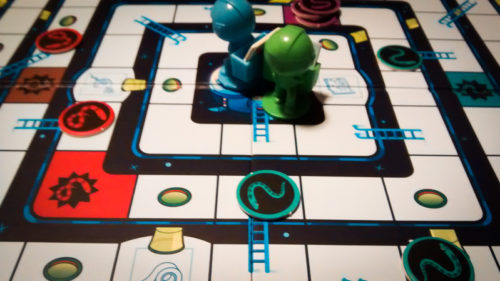 I can confirm that Mole Rats in Space is a Chutes and Ladders killer. It has a more fun theme and it gives everyone more choices to make. Plus, I think most people will agree it has a much better look than Chutes and Ladders.

Mole Rats in Space is a must-have for anyone who is looking for a cooperative board game for older kids. It could also work as a family game for those who are looking for a lighter co-op. The board and the mole rats look great, the theme works, and it has plenty of replay value.

Thanks for taking the time to read our Mole Rats in Space review! To stay updated on all things cooperative board games, follow us on Twitter, Facebook, or via RSS.