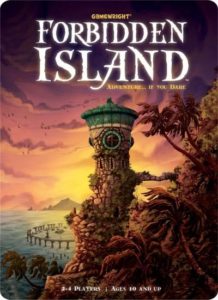 This Forbidden Island review was made after playing the game about 20 times.

What is Forbidden Island?

Forbidden Island is a cooperative survival game designed by Matt Leacock and published by Gamewright. Two to four players take on the roles of different adventurers who move throughout an island of mystery looking for lost treasures. The island is not stable and is slowly sinking, though, so the players need to get the treasures and get away quickly as possible.

Players can choose from one of six different roles in Forbidden Island. Each one has its own unique abilities, which can change the players’ strategies throughout the game.

The board itself is made up of 24 island tiles. Some of the tiles have treasure symbols on them, and players must go to these tiles to get the treasure when they have enough treasure cards of that type.

Each turn, players can use their three actions to move, shore up (flip) flooded tiles, or share cards. Players will also be able to use certain action cards that allow them to get helicopter rides to different parts of the island (Helicopter Lifts) or shore up any tiles (Sandbags).

If a tile is flooded and the corresponding card is drawn, the tile has been considered sunk and it is removed from the game. If a player is on a sunken tile, they must move to a new tile. If they cannot move, they drown and the game is lost.

The players lose if the Fools’ Landing tile sinks, a player drowns or they lose the ability to collect one of the treasures. The game is also lost if the water level reaches the Skull and Crossbones level.

The only way to beat Forbidden Island is if all four treasures are collected, the players make it to Fool’s Landing, and one player discards a helicopter card.

Players take similar types of actions and have similar roles in both games, but Forbidden Desert has an added mechanism where locations and sand is moved around the desert as the storm moves. This is another thing for players to think about, so it can cause a bit of confusion early on if you aren’t used to these types of games.

You really can’t go wrong with either game, but Forbidden Island might be slightly easier to grasp for beginners.

Take a look at our Forbidden Desert board game review for a more detailed explanation of that game.

Forbidden Island has been one of the most popular cooperative games since it was released, and for good reason. It’s easily one of my group’s favorite cooperative board games for families and will continue to hit the table for years to come since it works so well as a quick and challenging filler game.

If you are looking for a solid co-op board game for beginners, or if you just want a great little survival game that the whole family can enjoy, you really can’t go wrong with Forbidden Island. It’s inexpensive, challenging, and a whole lot of fun!

If you want to test out the game, be sure to download the Forbidden Island app for iOS.

Update: Forbidden Island made it onto our Top 10 Filler Games list!

Update 2: It also made it onto our Top 10 Family Games list!

Thanks for taking the time to read our Forbidden Island board game review! To stay updated on all things cooperative board games, follow us on Twitter, Facebook, or via RSS.