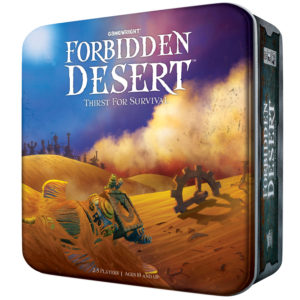 This Forbidden Desert board game review was made after playing the game six times.

What is Forbidden Desert?

Forbidden Desert is an adventure co-op board game that has you attempt to recover a legendary flying machine that is in the ruins of a desert. You have to work with your teammates in order to use the resources around you to survive the desert and everything that it throws at you. The goal of Forbidden Desert is simple: get the flying machine’s parts and get out alive! 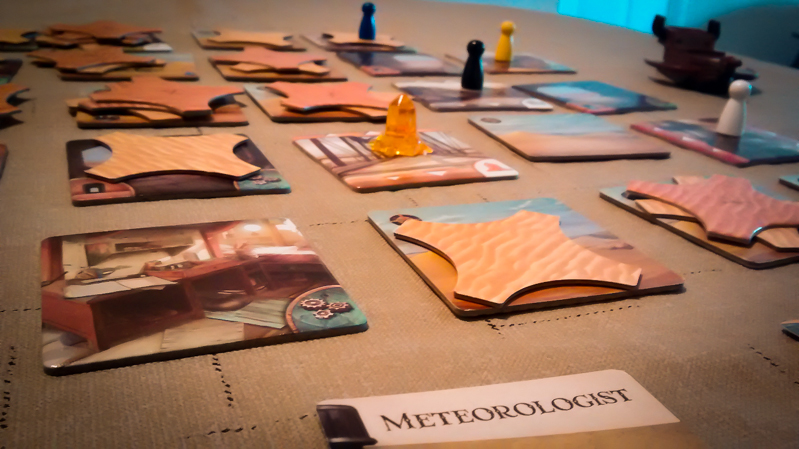 At the start of Forbidden Desert, each player chooses their own character with a unique set of powers. The board tiles are then set up with an empty space in the center. Players start with their pieces on the crash landing tile and they begin to play.

A player can take up to four actions per turn and they need to draw a storm card equal to the current sandstorm level. Players’ actions are: move, remove sand, excavate or pick up a part.

Storm cards are all bad for players, but they will vary in their degree of difficulty. Most of these cards cause the storm to move on the board, while the other cards increase the storm levels or make the sun beat down on the players. Players can lose their water as a result of the sun beating down on them, which is obviously never a good thing.

Beating Forbidden Desert requires getting all of the pieces of the flying machine and flying out of the area alive. You can lose by having a player die of thirst, running out of sand markers, or being swept away by the storm.

That should give you a good feel for how the game plays, but you can check out the official Forbidden Desert rulebook (PDF) for a more complete explanation of the rules.

For me and my group, Forbidden Desert isn’t quite as good as Pandemic, but it is a step up from Forbidden Island (though we still play all three). The Forbidden Desert tiles and cards are designed beautifully, and each game will be a bit different from the last. They haven’t even had to make a Forbidden Desert expansion since there is plenty of replay value in the original tin. It is a great choice for anyone who is interested in owning a quick and challenging cooperative game.

If you want to test out the game, be sure to download the Forbidden Desert app for iOS.

Thanks for taking the time to read our Forbidden Desert board game review! To stay updated on all things cooperative board games, follow us on Twitter, Facebook, or via RSS.