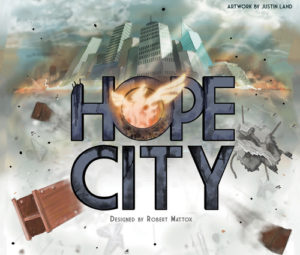 This Hope City review is based on a total of six games, with at least one game played at each player count.

What is Hope City?

Hope City is a cooperative board game in which you’re trying to rebuild a city that has been taken over by corrupt leadership. As citizens, it’s your job to use your characters’ skills to shut down the city’s punks and build new City Sites within seven years.

Hope City was designed by Robert Mattox and published by Dux Nova. 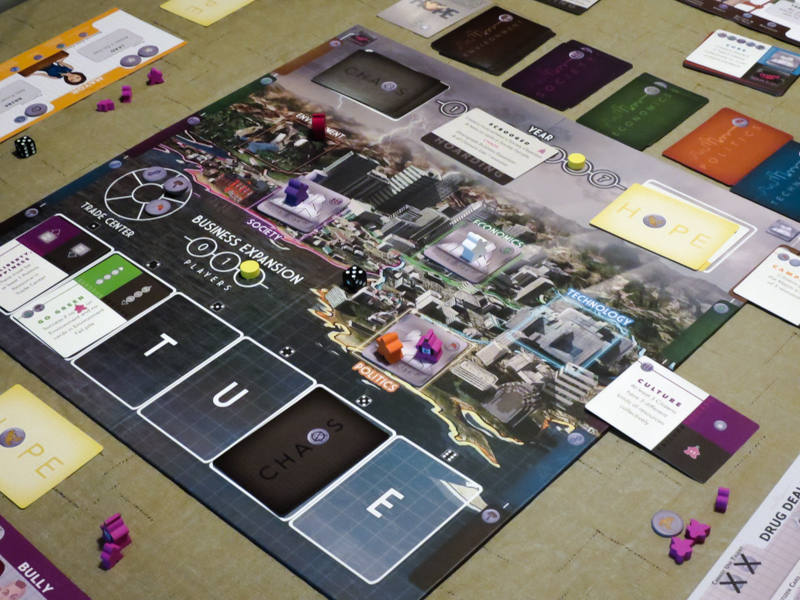 You’ll begin each year/round by flipping over a Chaos card. These cards give you conditions you’ll need to fulfill by the end of the year. You’ll never get a reward for meeting those conditions, but failing to do so can be prettttty bad for you.

Characters have two special abilities that they can use throughout the game: Talents and Temptations. To use a Talent, you simply discard one of your Talent tokens and then take that action. When you choose to use a Talent, you can use yours or any of the characters that aren’t controlled by other players. The Temptation action is always better than the Talent action, but you’re forced to roll the corruption die each time you use it.

If you get too much corruption, you “break bad,” which makes things a bit tougher for the whole team. You don’t turn into a traitor, but you do gain a flaw and any corruption you get on your turn goes to other characters, potentially making them break bad too! Your teammates will need to complete an objective of your color to help you become good again. 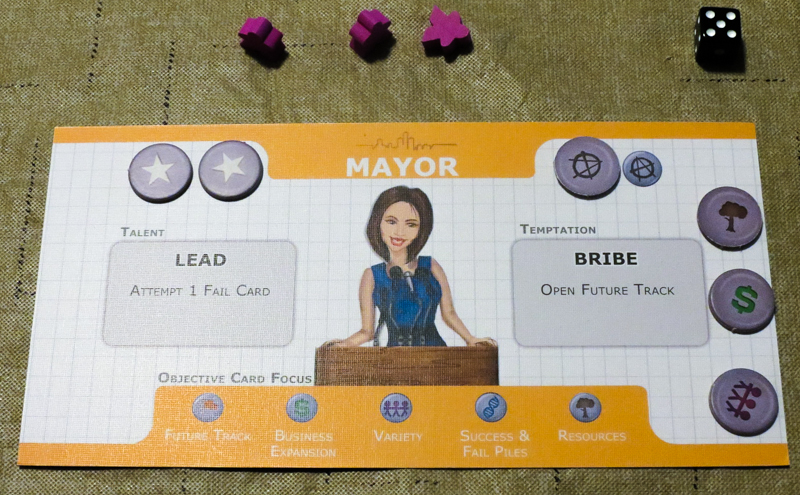 When you attempt an objective, you’ll pay the cost in resources and then see if you met the conditions. A success will move the card over to the the Success pile, while a a failure will send it over to the Failure pile. You can also skip the objective card for now and put it on the Future Track, which gives you more options on future turns but also could create problems if the track fills up.

If you complete an objective of your color, you get a Hope card. These cards give you a one-time, potentially game-changing ability that you can use any time.

The way you cooperate in this game is by talking about each move you’re going to make and by leveling up Business Expansion. The Business Expansion shifts from Level 0 to Level 2 and it is leveled up by completing certain objectives. If you expand to Level 1 or 2, you can share resources to complete objectives with one or two other players. This is the main way to complete Major Objectives (see paragraph below).

The key to beating Hope City is having three City Sites built by the end of the seventh year. There are three ways to build a City Site: complete one of the Major Objectives (objectives that require all five resources); get a full set of five objectives in the Success Pile; or remove a full set of small and big punks from the game.

That’s just a basic overview of how to play Hope City. If you want to see a more detailed explanation of the rules, check out the official Hope City rulebook (PDF). 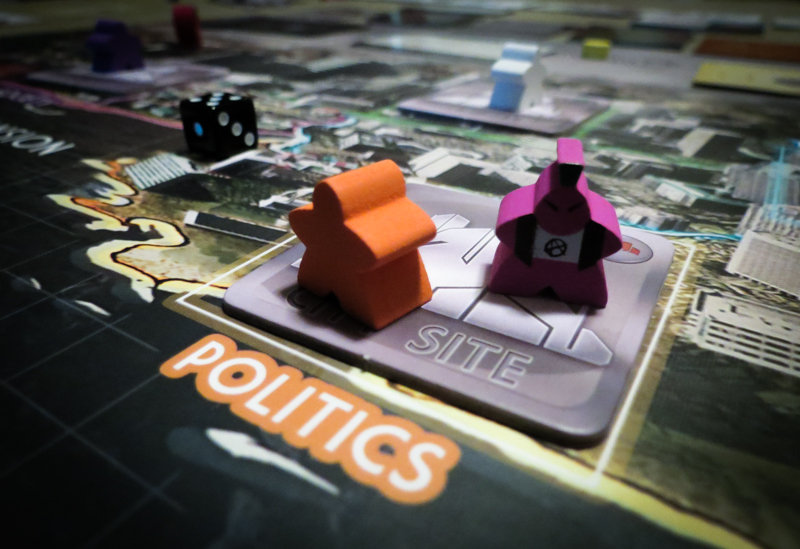 Check out Hope City at BoardGameGeek

Hope City is a good game mechanically, but we think it needs another theme to stand out. I honestly think this game has the potential to be a hit with a better theme. If this theme does interest you, Hope City is worth checking out since it plays differently than other cooperative board games out there and it’s a good challenge.

Thanks for taking the time to read our Hope City review! To stay updated on all things cooperative board games, follow us on Twitter, Facebook, or via RSS.