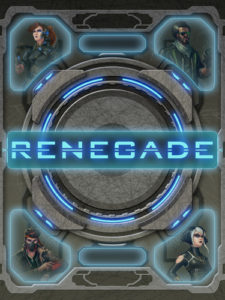 This Renegade review was made after playing seven solo games, four two-player games, and two three-player games. We were sent a prototype copy of this game by the publisher in exchange for an honest review.

Renegade is a solo and cooperative board game in which you are hackers attempting to take down a pretty evil computer network. Why do you want to hack into it? Well, it was designed to understand humanity’s decline, but it has turned into a system that controls the majority of humans in your area. As Renegades, it’s your job to hack into one of the four Super-Massive-Computers (SMCs) and use your avatars to bring it down.

Renegade is designed by Richard Wilkins (aka Ricky Royal, who is known for making amazing reviews and playthrough videos on YouTube) and published by Victory Point Games. It’s played on a modular board, and it has deck building, area control, and dice-rolling elements. 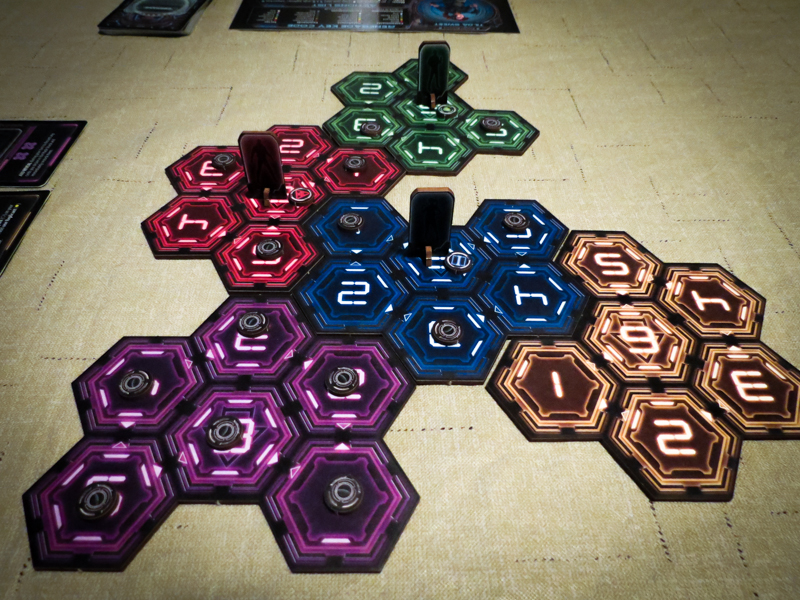 In the beginning of the game, you’ll randomly set up the SMC’s network with the five server tiles. You’ll get your character’s 15-card starting deck, and then you’ll place your character’s standee on their starting space. The SMC that you chose to face off against will have its own card which will give you additional setup info and unique gameplay instructions. You’ll also set up an SMC deck, which is comprised of Countermeasure cards (bronze, silver, and gold) that will give you objectives and sometimes special rules for the game.

Renegade is played in “cycles.” These cycles are are made up of player turns (three per player per cycle) and Countermeasures (the SMC hitting back at you). During each player’s turn, they’ll be using their five command cards to try to manipulate the network in such a way that both keeps them on the network and helps them complete their objectives. 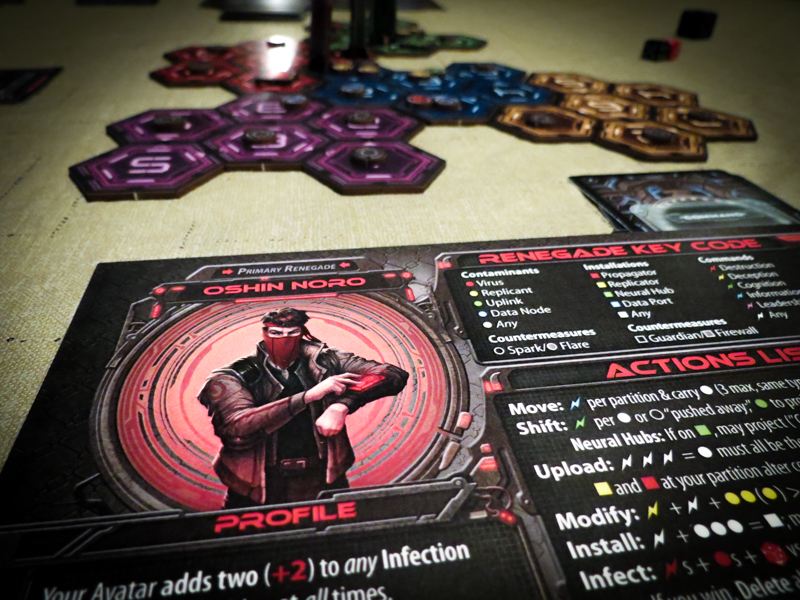 Your tools (called “contaminants”) inside of the SMC are tokens created by using the cards in your hand. These contaminants are viruses (red), replicants (yellow), uplinks (green), and data nodes (blue).

The viruses help you delete sparks and guardians (the main Countermeasures that the SMC uses). The replicants can help you turn sparks into contaminants. The uplinks allow you to move contaminants and sparks around the network. And the data nodes make movement easier.

All of those contaminants can be upgraded into “installations,” which give you better abilities to use across the network. For example, using a blue “information” command on a partition that has three data nodes (blue tokens) will create a data port installation, which will give you a teleportation ability from that spot.

The way that you’ll be taking actions each turn is by using your command cards. These cards allow you to create and use your contaminants and installations. The most powerful command is leadership (purple), which acts as a wild command. You can use multiple cards at the same time, but you can only perform a single type of action with those cards. 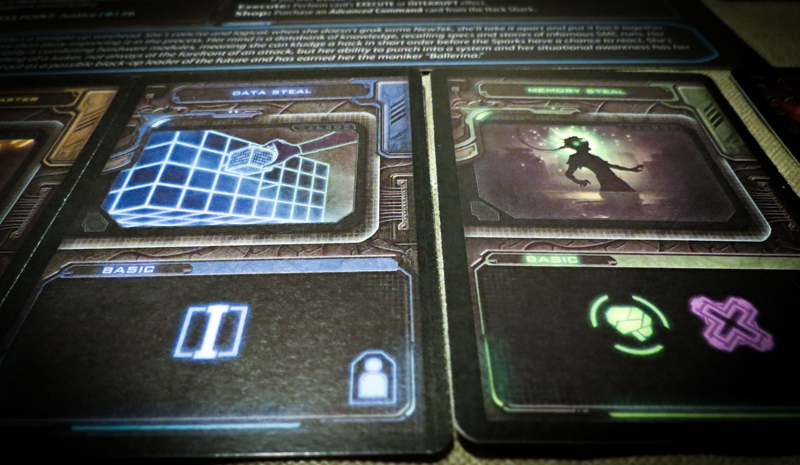 You’ll start each round with five cards in your hand, but you can upgrade those cards by buying “advanced command” cards from the Hack Shack. There will always be four cards available to you at the Hack Shack at the start of your turn. All you have to do to buy one is pay the cost on the card, trash one of the cards you used to buy it, and then add that new advanced command card to your hand. The advanced command cards not only have the basic commands, they also have “execute” or “interrupt” functions that give you additional abilities. 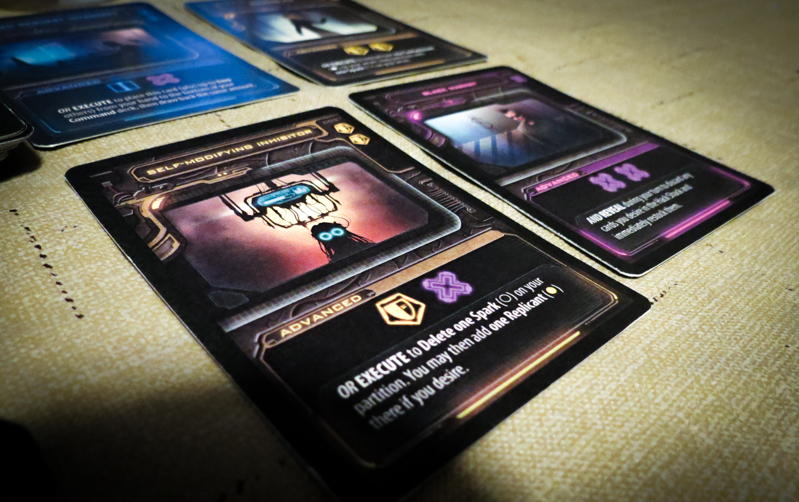 After everyone has taken three turns during a cycle, the SMC will “fight back” by attacking your contaminants and moving its sparks around. When three sparks are on the same partition/space, they will create a guardian, which is harder to remove and creates additional chaos. If a spark has to move into a partition with a guardian, a “spark explosion” occurs (think of epidemics in Pandemic), putting even more sparks on the board.

You’ll lose the game if you ever have to place a spark or guardian on the board and there are none left in the supply. You’ll win by getting through all three cycles. After you’ve “won,” you’ll have to check your score in the rulebook to see how well you really did.

Those aren’t all of the rules for Renegade, but hopefully you now have a pretty good idea about how the game plays. 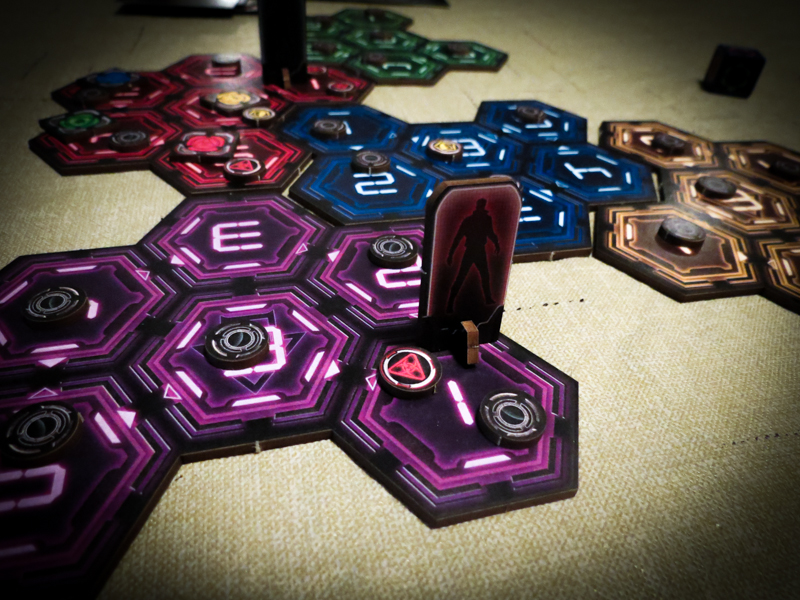 Renegade surprised me in a number of ways. First, I thought the theme wouldn’t go over well with some of the people in my group, but they really got into it. Second, I worried that it would be frustrating to teach, but you really can just walk people through it after you’ve learned the rules. And lastly, the deck building is sooooo much better than I was expecting.

Is Renegade for everyone? No, probably not. The hacker theme might not be some people’s cup of tea. But I think there’s a pretty good chance this is going to be a hit. I think people who give it a chance will see that this mix of cyberpunk, adventure, deck building, and area control craziness just works somehow.

To us, Renegade is a great solo and two-player game, and it’s a very good three and four-player game. I like the game as is, but I really can’t wait to see the final product!

Thanks for taking the time to read our Renegade review! To stay updated on all things cooperative board games, follow us on Twitter, Facebook, or via RSS.