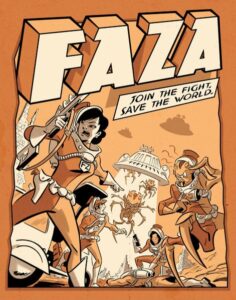 This Faza review was made after playing the game six times. We were sent a copy of this game by the publisher in exchange for an honest review.

Faza is a sci-fi cooperative game in which you are attempting to stop an alien race, the Faza, from taking over the planet. With some help from some Faza rebels, you’re tasked with taking down the aliens’ three motherships before they do too much damage.

Faza was designed by Benjamin Farahmand. 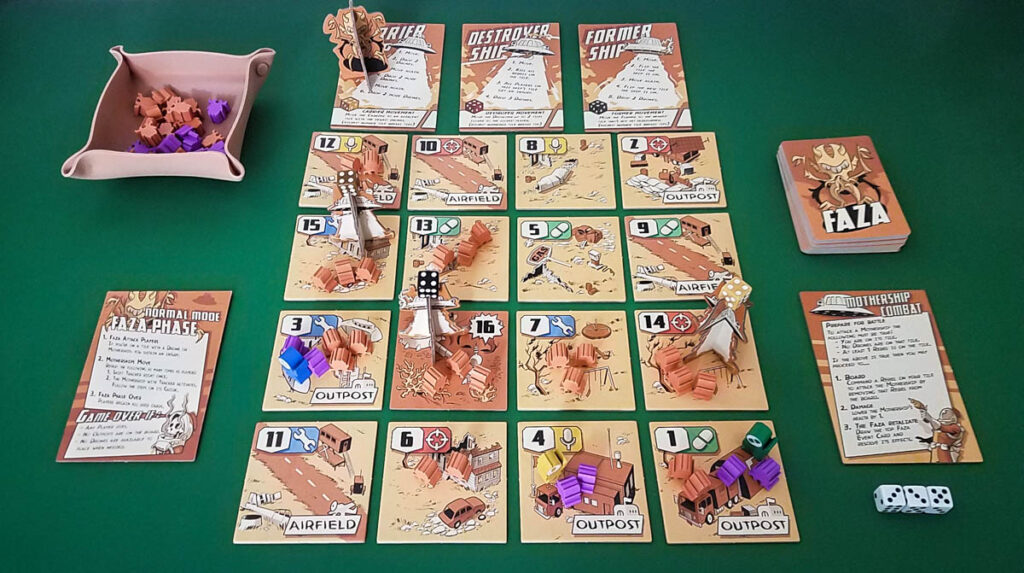 In Faza, you’re part of a team called Faction Zeta that is attempting to stop the alien invaders, the Faza. Your goal is to take down all three Faza motherships, which you’ll do by using your characters’ unique skills and action cards to kill the enemy drones that are protecting the ships. Once a mothership is unprotected, you can send your friends, the Faza rebels, to board and do damage to it. The map is a randomized 16-tile layout, so the motherships’ starting spots, your outposts, and the rest of the tiles change up how you approach each game.

Each round has a Team Phase and a Faza Phase. During the Team Phase, you take actions in any order until everyone’s out of actions or you just choose to end the phase. During the Faza Phase, the motherships perform their own unique actions, including moving, dropping more drones, destroying/”fazaforming” the planet, and attacking.

Each character has a skill and four dual-use action cards that are unique to them based on their focus (medical, political, tactical, or technological). Each action card can be used once for either its top or its bottom action each round. Some of the actions include moving (your character or any group of rebels), adding rebels, enhancing an attack, and healing. 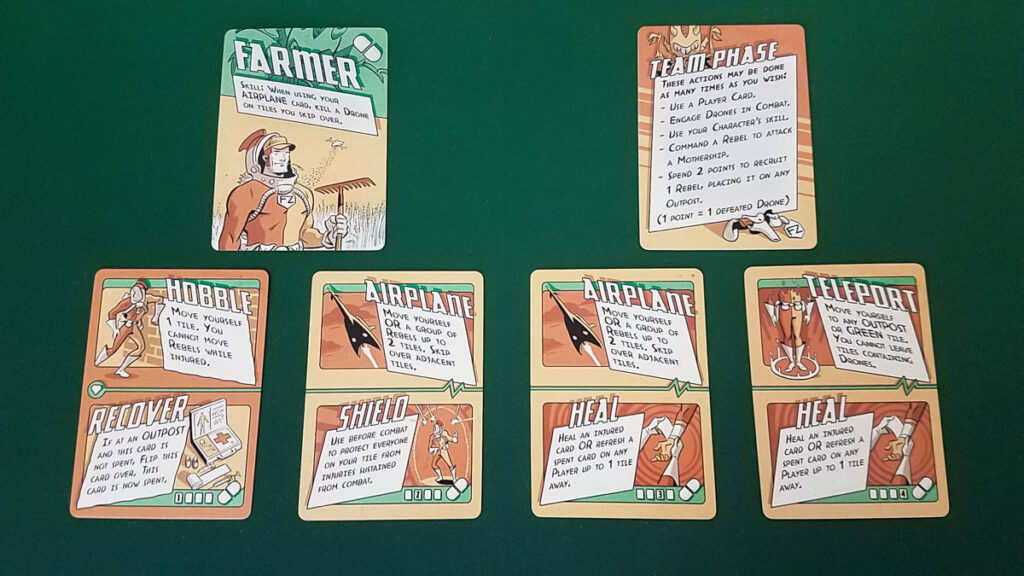 Your main focus in the game is fighting the drones so you can get to the motherships. To fight the drones, you simply roll dice equal to the number of drones on your tile and hope for a 4+ on each one. You add +1 to each die if you’re fighting on a tile that matches your character’s focus symbol, and you can also get fighting benefits from some action cards. You’ll take damage for each miss, flipping over one of your action cards and getting a weaker version of it. The rebels on your tile protect you, though, so they take damage (get removed) before you do. You can “spend” two defeated drones to add more rebels to the board; this is the main way to get more rebels.

To fight one of the motherships, you have to get on their tile, clear out any drones, and have at least one rebel with you. You then remove a rebel from the tile and reduce the mothership’s health die by one. You have to draw a Faza Event card every time a mothership takes damage and see what happens (usually bad things).

You’ll win if you’re able to defeat all three motherships. You’ll lose if any character dies (takes four damage), if you run out of drones and need to add one to the board, or if all four of the outposts are destroyed. 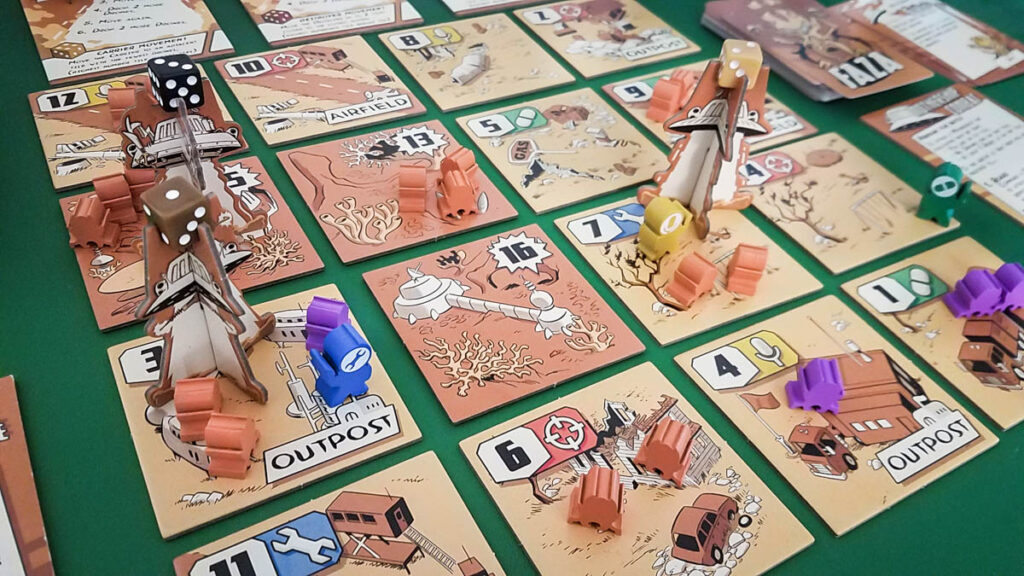 I didn’t have a great first impression of Faza, but now I’m a pretty big fan of it. It really does have a unique look and feel to it and it’s pretty challenging even at the Normal difficulty level. It has a great theme, the variable turn order gives you plenty of fun team decisions to make, and the dice and those event cards make each game play out differently. I do think it could use some tweaks to make it even better, especially to the event deck, but I think this one will stay in my collection for a while.

I’ve played Faza at every player count and I like it best as a three-player game. That felt like the perfect game length and I liked having the three focuses to bring balance to the team. It does also play well at two and four players, though.

If you like puzzly cooperative games and this space invader theme works for you, I’d definitely recommend checking out Faza.

Thanks for taking the time to read our Faza review! To stay updated on all things cooperative board games, follow us on Twitter, Facebook, or via RSS.