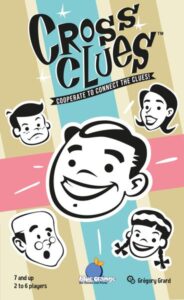 This Cross Clues review was made after playing the game about 15 times.

What is Cross Clues?

Cross Clues is a cooperative word game in which you try to find links between pairs of words. The game was designed by Grégory Grard and it is published by Blue Orange Games. 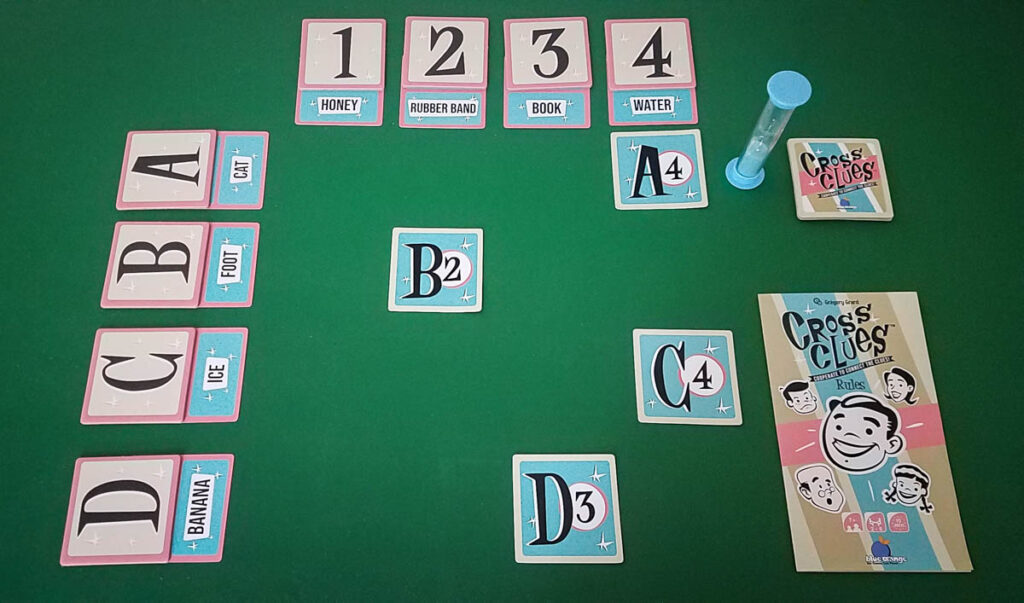 In Cross Clues, you work together to fill in as much of the 3×3 (easy), 4×4 (medium), or 5×5 (hard) grid with clue cards. You do that by finding connections between words on the vertical and horizontal axes.

There are no turns in Cross Clues. Instead, everyone will have one clue card in their hand and whoever thinks they have a good clue for their card’s coordinates will say a one-word clue. For example, if you have the D4 card and the D word is Animal and the 4 word is Forest, you might say “Deer” as your clue.

After you’ve gone through all of the clue cards (or the five-minute timer runs out in the real-time version), you’ll get a score based on how many cards are in the grid.

Cross Clues is a very clean design with simple rules and fun gameplay. I enjoy the challenge of trying to find connections between the words and I really like the tension that builds when playing the real-time version. This is yet another word game that I know I can break out with just about any group and be confident we’ll have a good time.

Cross Clues isn’t my favorite co-op word game (that’d be Codenames Duet), but it’s possibly the best one for families to play. I played this with my nieces (ages 8 and 11) and they absolutely loved it. So, I’d definitely recommend it as a family game, and I also think it’d work great as a filler game for fans of word games.

Thanks for taking the time to read our Cross Clues review! To stay updated on all things cooperative board games, follow us on Twitter, Facebook, or via RSS.