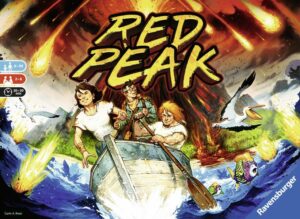 This Red Peak review was made after playing the game four times.

What is Red Peak?

Red Peak is a real-time survival game in which you and your team are attempting to get off of a volcano before its lava reaches you. This cooperative game was designed by Carlo A. Rossi and is published by Ravensburger. 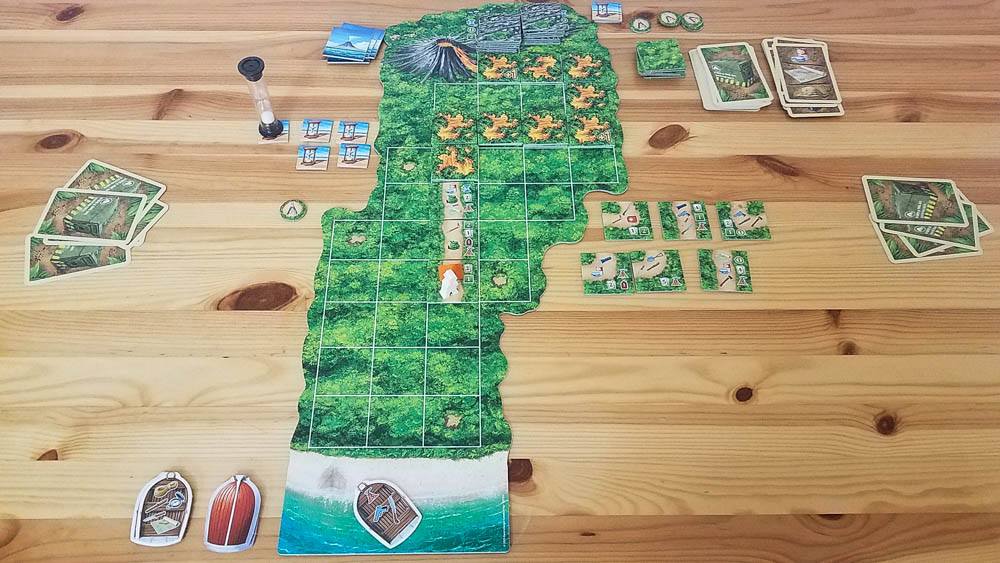 In Red Peak, you’ll be working with your teammates to create a path down a volcano in hopes of making it to your escape boat before the lava reaches you. You’ll start out with 12 tool cards split between the players (face-down at first) and seven path tiles to choose from for the first round.

The timed Daytime phase is where most of the action happens. You begin the phase by flipping the 90-second sand timer and picking up your tool cards. You can talk about the tool cards that you have, but you can’t show them to your teammates. What you’re trying to do is figure out which path tiles you can place on the board; you do this by matching the tool symbols on your cards to the symbols on the tiles. The first part of this phase is putting the path tiles on the board and the second is discarding the required tool cards to move the Adventurer pawn along the new path.

After you’re done moving the Adventurer, everyone puts their tool cards face-down and you won’t pick them up again until the start of the next Daytime phase. You’ll then check to see if there is any sand left in the sand timer. If there is, nothing happens. If there isn’t, you’ll move the sand timer to the next time tile (you start with three). If there aren’t any time tiles remaining, you’ll add a new one to the timeline and a lava tile is drawn.

During the Evening phase you’ll move the Tent pawn along the path until it reaches the Adventurer pawn. Each tile the tent moves across gives your team rewards (reward icons are on the path tiles), such as more tool cards, a new escape boat, or more path tiles to choose from. This is also the main way that the volcano erupts and lava tiles get added to the board. At the end of the Evening phase, you can optionally get more tool cards, path tiles, and other resources if you’re willing to add more lava tiles to the board. Then you’ll plan for the next Daytime phase by looking at the available path tiles and trying to remember which tool cards you have.

You’ll beat Red Peak if the adventurer and the tent make it to the boat. You’ll lose if the lava ever reaches the tent.

There are also optional bonus tiles included with the game that you can place on certain spots on the board, making the game slightly easier. To make the game a bit more difficult, you can play on the reverse side of the board and use the quest cards, which force you to hit specific spots in the jungle on your way to the boat. 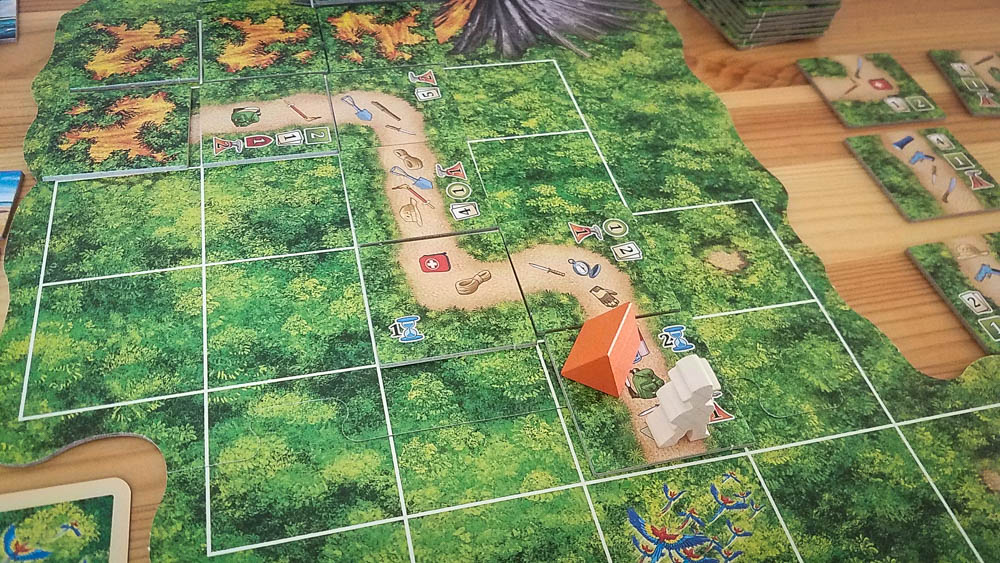 Check out our Top 10 Real-Time Games!

I probably won’t be playing Red Peak with my main gaming group again since we’ve kind of figured it out after four games. That’s not really putting the game down, though, since I’m pretty sure it was designed for families to play. I think Red Peak would be a good game to check out if you have children in the 7-12 age range and they’re interested in this survival theme. It’s a unique cooperative game that’s very easy to learn, looks great on the table, and requires a good amount of teamwork. It’s just not a game that I’ll be keeping.

Thanks for taking the time to read our Red Peak review! To stay updated on all things cooperative board games, follow us on Twitter, Facebook, or via RSS.