This Space Hulk: Death Angel review was made after playing the game five times.

What is Space Hulk: Death Angel?

Space Hulk: Death Angel is a cooperative card game designed by Corey Konieczka and published by Fantasy Flight Games. In this game, players are attempting to ward off a horde of aliens called Genestealers.  Your job is to strategically move from location to location taking out those Genestealers and hope that at least one Space Marine survives the onslaught. 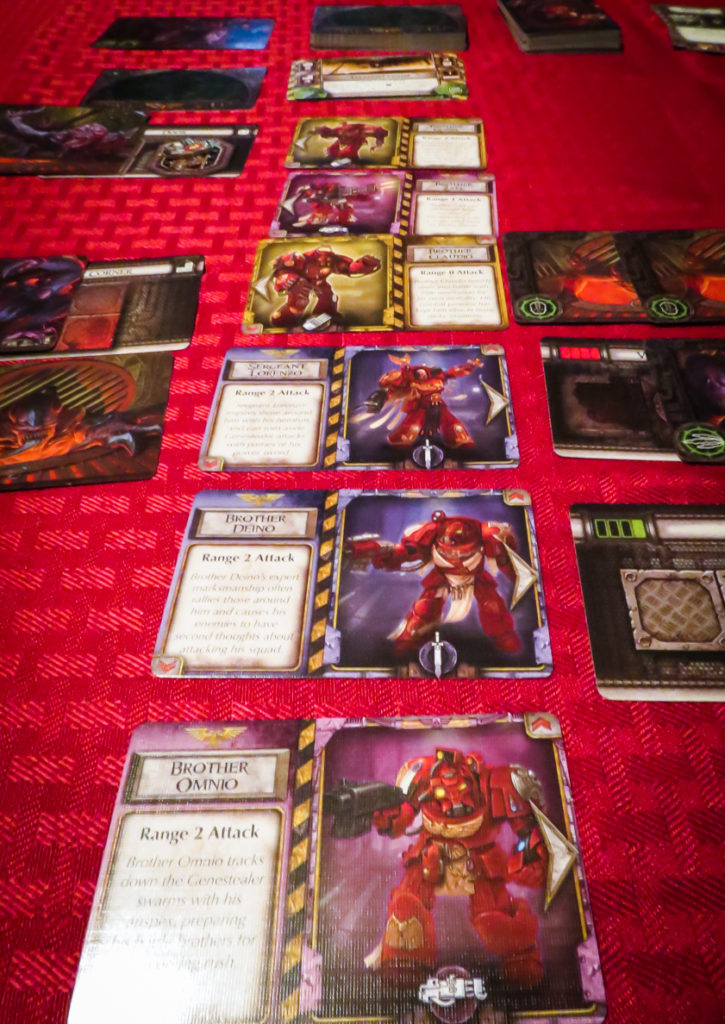 The Space Hulk rules are pretty simple to understand, though they seem a bit complex when you first start going through the rulebook.

Each combat team has three action cards: Attack, Support, and Move + Activate. The Attack cards attack, the Support cards allow players to give support (reroll) tokens to other players, and the Move + Activate cards allow players to swap positions in the formation and activate different terrain cards. Each combat team activates a unique skill when they use their action cards.

After the players have taken their turns, the Genestealers will attack, then an event card will be drawn. Event cards tell you where to spawn more Genestealers and will have some text for you to follow. After the event card is resolved, the next attack phase begins.

Throughout the game, players will need to move from location to location. Each location card will tell you what terrain cards to put out, how many Genestealers will spawn in that location, and a bit more information. Your job is to get through each location by depleting the Genestealer/blip decks and complete the objective on the final location card.

If all of the Space Marines are killed before they get through the final location, everyone loses. If at least one player completes that final objective, everyone wins!

Space Hulk: Death Angel is a very solid co-op card game that I will definitely be keeping in my collection. I can’t say that everyone in my group loved it (too tough for a couple of them), but I don’t see any of them turning it down if someone wants to play.

If you’re a fan of the Warhammer 40,000 universe, or intense cooperative games, or are just looking for a new co-op game to buy, definitely check out Space Hulk. It’s a unique game (the only game I can think of that is kind of similar is Warhammer Quest: The Adventure Card Game) with plenty of replayability that most people will enjoy.

Thanks for taking the time to read our Space Hulk: Death Angel review! To stay updated on all things cooperative board games, follow us on Twitter, Facebook, or via RSS.