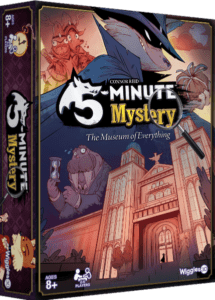 This 5-Minute Mystery review was made after playing the game eight times. We were sent a prototype copy of this game by the publisher in exchange for an honest review.

This is a Kickstarter preview so rules, components, and art could change before the game is released. This will become a full review once we’ve had a chance to play the retail version of the game.

What is 5-Minute Mystery?

5-Minute Mystery is a real-time cooperative game in which you need to work as quickly as you can to find out who stole the priceless MacGuffin from the museum. The crook did leave some mysterious symbols at the scene, so you need to use your codex to convert those symbols into clues and make the arrest.

5-Minute Mystery was designed by Connor Reid and is published by Wiggles 3D. 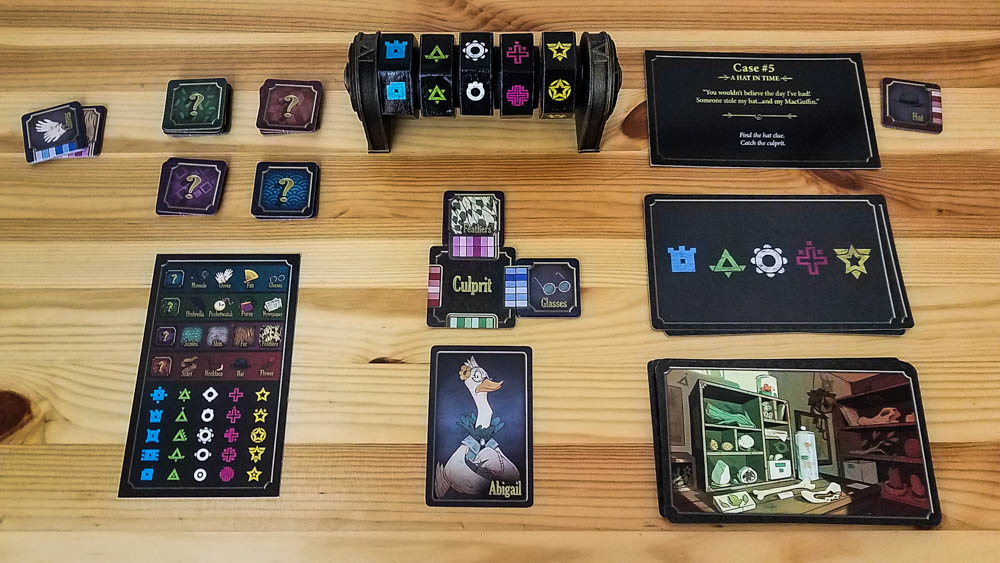 Setting up a game of 5-Minute Mystery is very simple. You choose a case to play, draw a culprit tile and place it face-down, shuffle the scene cards, shuffle the four stacks of clue tiles, and then evenly distribute all of the culprit cards. You’ll then start the timer and go!

During each round/scene of the game, one player will have the codex and it’s their job to turn the five dials so the correct shape variations are lined up. The other players will be looking at the scene card and will tell the codex player the shape variations they find on the card. There are five shapes and five variations of each shape. Once all five symbols have been found, you’ll check the back of the scene card to see if you were correct. If you were, you’ll get a clue tile. If you weren’t, you don’t get a clue tile and just go straight to the next scene.

When you earn a clue, you take a clue tile from one of the four stacks. You then flip it over and line up its barcode to the same-colored barcode on the culprit tile. If it matches, you leave it there and you know something about the culprit. For example, if the clue tile shows a purse and the barcodes line up, you know that the culprit has a purse. If the barcodes don’t line up, you discard the tile and you know that the culprit doesn’t have that item. Regardless, everyone can discard culprit cards based on the new information.

You’ll win if you catch the culprit before time runs out. You also get a “Hail Mary” opportunity if time does run out, meaning that you can still win if you guess who the burglar is from the remaining suspects.

5-Minute Mystery is simple to learn and teach, it’s a unique real-time experience, and it’s a good challenge. I have a feeling that a lot of people are going to like this one.

Thanks for taking the time to read our 5-Minute Mystery review! To stay updated on all things cooperative board games, follow us on Twitter, Facebook, or via RSS.