Skip to content
Co-op Board GamesReviewsGloom of Kilforth Review 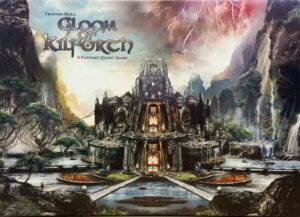 This Gloom of Kilforth review was made after playing the game seven times. We were sent a copy of this game by the publisher in exchange for an honest review.

What is Gloom of Kilforth?

Gloom of Kilforth is a fantasy card game in which you play as heroes who are attempting to complete personal quests and defeat evil villains before a deadly gloom consumes the land. The game can be played solo, cooperatively, or competitively.

Gloom of Kilforth was designed by Tristan Hall and is published by Hall or Nothing Productions. 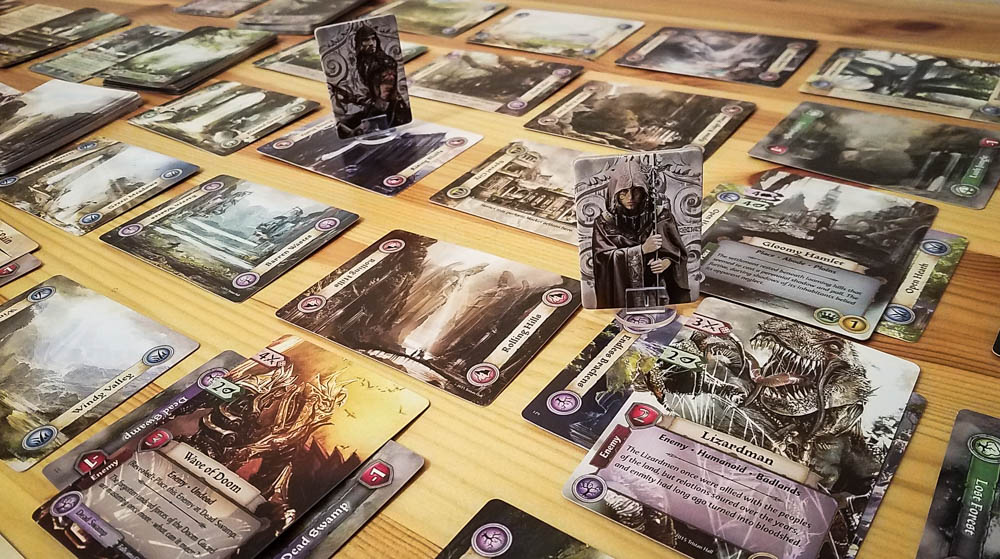 Regardless of game mode, in Gloom of Kilforth you’re attempting to complete your hero’s saga and defeat the Ancient(s). Just about every card in the game has keywords on it, and you’ll be looking to collect the keywords that you need to complete each chapter of your saga by traveling around Kilforth and taking on encounters.

You’ll create your hero at the beginning of the game by grabbing a race and a class card, which gives them a unique combination of skills. Throughout the game you’ll be using those skills – Fight, Study, Sneak, and Influence – to take on the encounters that you run into.

There are 25 locations (in a 5×5 grid) that you can travel to on your adventure. 24 of those locations are one of four different terrain types – Mountain, Badlands, Plains, and Forest – and the 25th location, Sprawl City, is your home base and is located in the middle of the kingdom.

Rounds are broken up into Dawn, Daylight, and Night phases. During the Dawn phase, you’ll get your action points back (equal to your current health) and any heroes that were defeated show back up in Sprawl City. You’ll take actions during the Daylight phase, which include moving, searching locations, buying cards at the market, resting, and playing cards from your hand as assets to give your hero new abilities. A Night card is drawn during the Night phase, putting one location into “gloom” (flipping it) and possibly activating one of the Ancient’s plot card abilities.

Like many other games of this type, you’ll be performing a lot of tests to see whether you successfully defeated an encounter or not. Your stats for your skills usually tell you how many dice you’ll roll during those types of tests. For example, if you want to fight an enemy and you have a total Fight value of 4, you’ll roll four dice and you’ll try to get enough successes (fives and sixes) to defeat the enemy. Once per day, you can add a success to any test by discarding a rumor or by using a Fate token.

When you move to any location, you’ll draw an encounter card matching its terrain type and will have to deal with whatever type of encounter it is. Encounters come in five types: Enemies, Strangers, Places, Quests, and Events. You’ll gain rewards every time you defeat encounters, such as gold, adding the card to your hand as a rumor, or drawing a specific type of reward card. 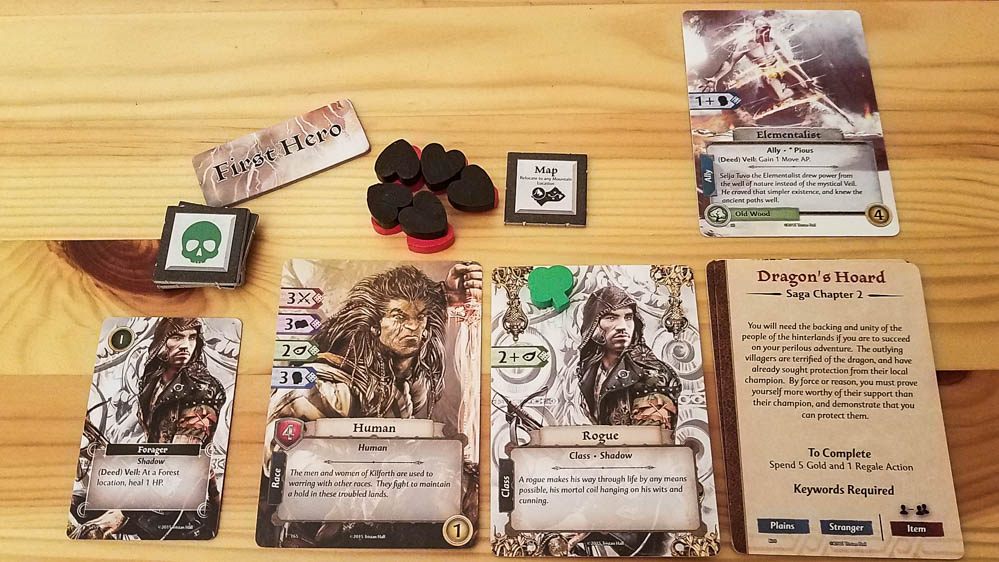 Your hero’s saga is broken up into four chapters and a finale, each with keywords that you’ll need to find to advance through the saga. Besides events, every encounter card will have keywords (Villain, Forest, Stranger, etc.), so you’ll have an idea of where you should go to find what you need.

Cards in your hand are considered “rumors” and they become “assets” when they’re played on the table next to your hero. Assets give your hero new stat bonuses and/or special abilities. Rumors and assets can both be used to complete your saga’s chapters, but you have to discard any rumors that you use in this way.

Once you’ve completed your saga, your Ancient will show up in Kilforth. Fighting Ancients is similar to fighting any of the other enemies in the game, but you have to fight to the death once you’ve committed to doing battle with one. Ancients have abilities that they’ll use each round of the fight and they’ll gain extra abilities from any Plot cards you didn’t clear off of the board during your adventure. 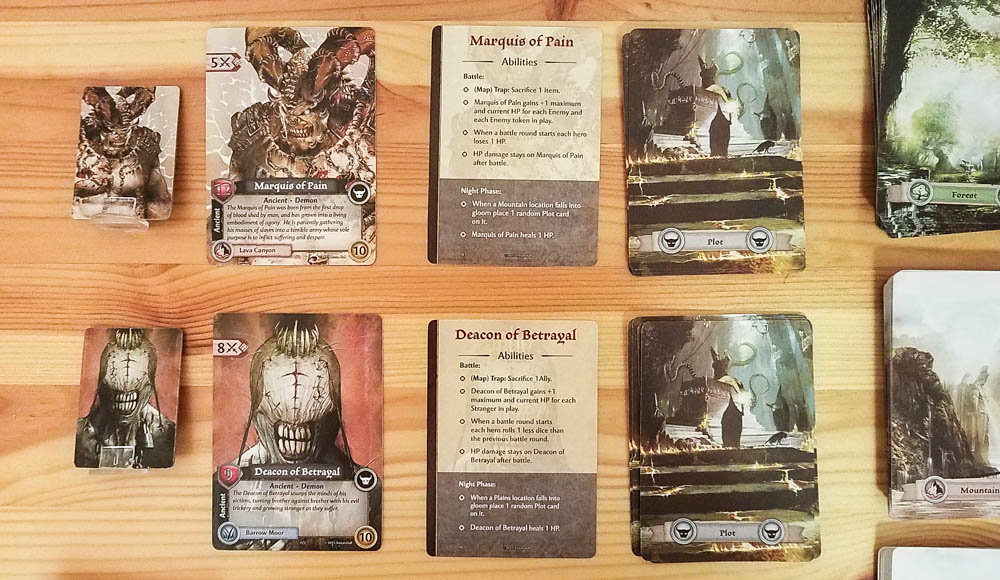 Check out more of our fantasy game reviews!

I think Gloom of Kilforth is fantastic… as a solo game. I’d classify it as a solo game that you can also play cooperatively or competitively. I’m not saying that the co-op mode is bad, but just don’t expect there to be a ton of player interaction or cool combos you can pull off together. If that doesn’t bother you, chances are you’ll also enjoy the co-op mode.

I think people who are open to role playing it a bit will get more out of Gloom of Kilforth than anyone else, but fans of set collection games can also have some fun with this one. After our first few games, my group started playing it as more of a straightforward set collection game without getting too into the story and we still had a blast.

So yeah, I think Gloom of Kilforth is pretty great. I’m not much of a solo gamer, but I had so much fun in my “tester” solo game that I played it a couple more times solo and had a really good time with it. However, I don’t think I’ll be getting it to the table too many more times as a co-op since there are a bunch of other fantasy card games – Dragonfire, Heroes of Terrinoth, and Direwild are some examples – that have much more player interaction.

Thanks for taking the time to read our Gloom of Kilforth review! To stay updated on all things cooperative board games, follow us on Twitter, Facebook, or via RSS.