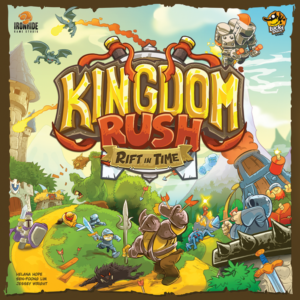 This Kingdom Rush: Rift in Time review was made after playing through the campaign (all two-player and three-player games). We were sent a copy of this game by the publisher in exchange for an honest review.

What is Kingdom Rush: Rift in Time?

Kingdom Rush: Rift in Time is a cooperative tower defense game based on the very popular mobile game Kingdom Rush. In this game you use your heroes and towers to defend your kingdom against all of the enemies and portals that the Time Mage throws at you.

Kingdom Rush: Rift in Time was designed by Helana Hope, Sen-Foong Lim, and Jessey Wright, and it will be published by Lucky Duck Games. 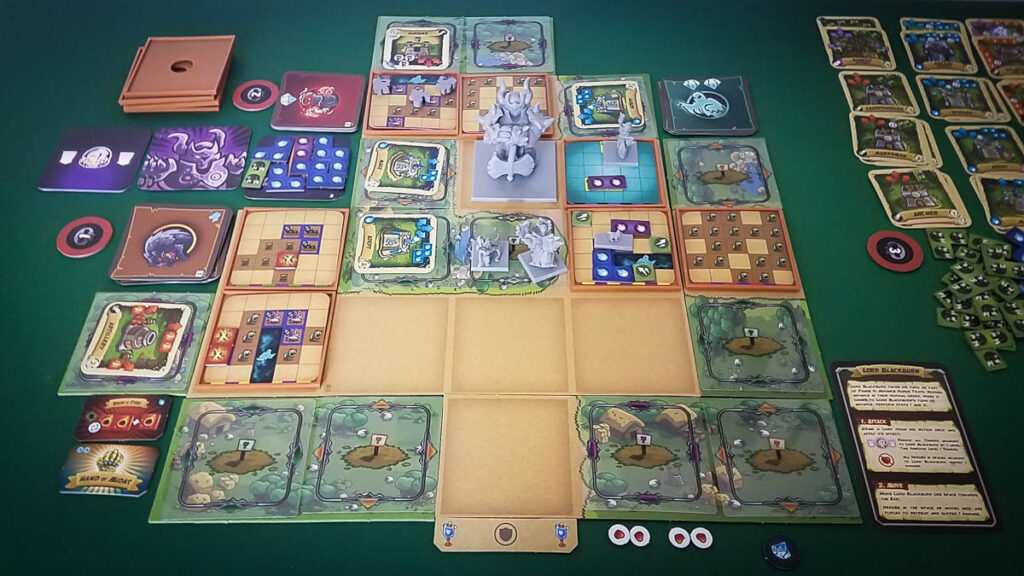 The scenarios you play in Kingdom Rush: Rift in Time have unique board layouts and different groups of enemies that you’ll have to face. The scenario booklet will also tell you where to put each building site, which is where you’ll be able to place your towers throughout the scenario.

During the main phase of each round, you’ll get to place towers and attack with them, pass towers to teammates to upgrade them, and activate your heroes (moving them and using their unique abilities). You can do any of these actions during this phase and players can perform actions in any order. What you’re trying to do is use your damage tiles (the polyominoes) and your heroes’ miniatures to cover the enemies on the horde cards before they make it to the exits.

The towers show which directions and how far they can shoot. You start out with just a few Level 1 towers that have restrictive placement rules for their damage tiles, but the higher level towers give you more flexibility. 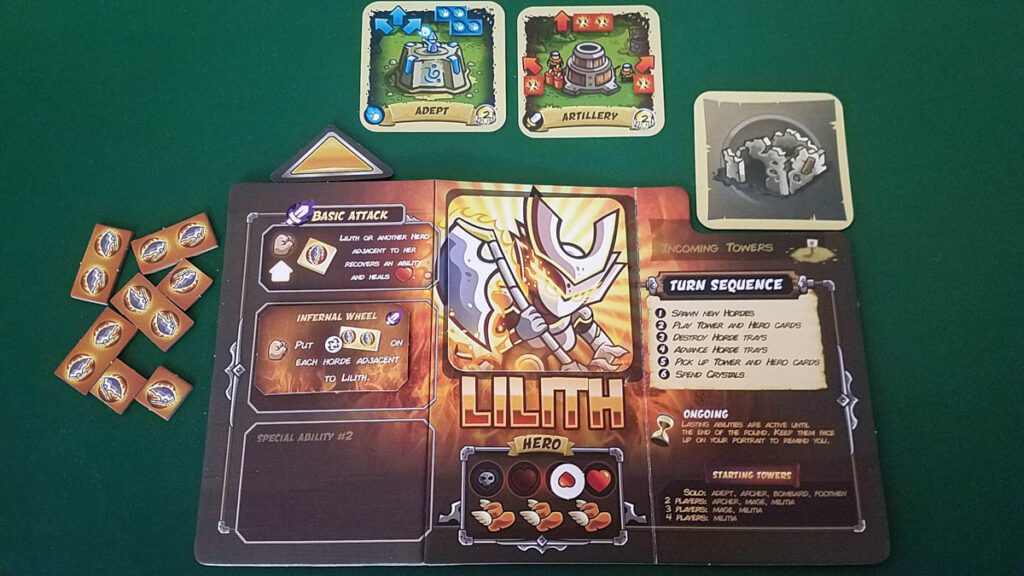 After the main phase is over, any horde cards that were destroyed are removed from the board and your team will get coins to use later on for new towers. Then the surviving hordes will advance toward the exits. Horde cards don’t move when they have soldiers or heroes on them, but the soldiers are removed and the heroes take one point of damage. When a hero runs out of health, they’re knocked out and won’t be able to do any actions the next round.

After the hordes have done their thing, anyone that had one or more tower cards passed to them during the main phase will upgrade those towers to the next level. You’ll also pick up any towers that you used during the round and optionally buy new towers with coins. Then a new round begins with more hordes coming onto the map. 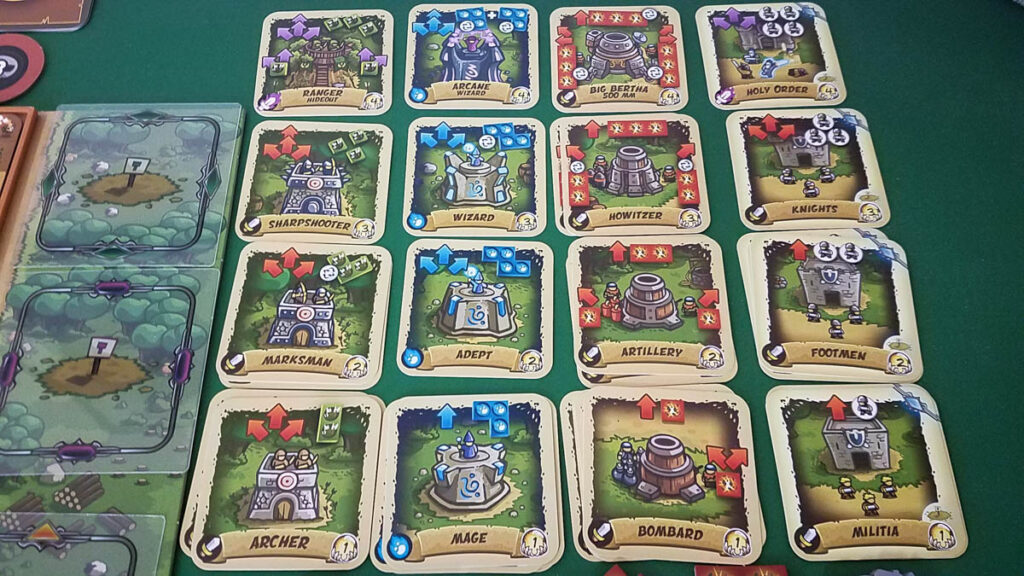 Some enemies have their own special abilities. Some heal, some deal damage after they move, and others make their hordes move faster. You’ll often be trying to come up with ways to cover the most threatening enemies on a card if you’re not going to be able to cover all of the enemies that round. Every time a horde card makes it to the exit, you’ll lose hearts based on the number of uncovered enemies.

Your main focus in most scenarios is destroying the purple portals. They have enemies on them just like the horde cards, but they have special rules. Each portal will have a tower level written on it, which is the lowest level tower that you can use to attack it. Also, towers that were used to attack portals are returned to the supply, not to your hand like your other towers. If any portal makes it to the exit tile, you’ll immediately lose.

You’ll win if you’re able to complete the scenarios objective. You’ll lose if the kingdom loses all of its hearts or if a portal is able to make it to the exit tile. 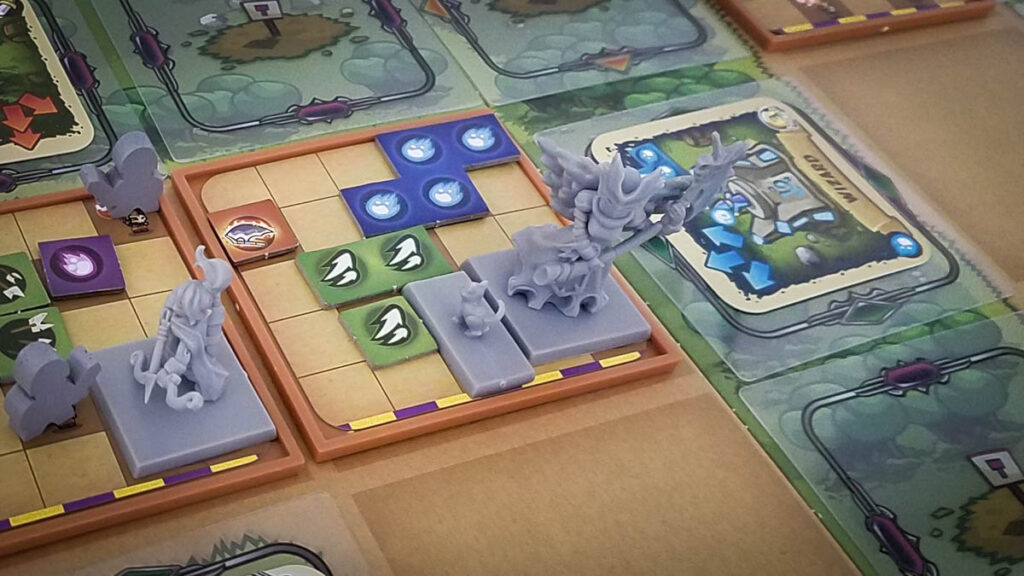 Kingdom Rush: Rift in Time is one of my favorite 2020 releases because it’s a fun and challenging co-op puzzle game that requires a very high amount of teamwork. I’ll probably avoid playing it with people who prefer games with better pacing, but I know that I can break it out with pretty much anyone else and we’ll have a great time. I’ve always enjoyed playing cooperative tower defense games, and Kingdom Rush is one of the best ones I’ve played.

I put a lot of hours into the Kingdom Rush mobile game a few years ago and I think the designers and publisher did a great job converting it into a board game. It’s not exactly the same, but the look is perfect and putting the different types of towers out to slow down the enemies feels just about right. I’ve now played through the campaign on the medium difficulty and I’m looking forward to trying it at the higher levels. It’s probably going to take a long time to get three stars for all of those scenarios.

As far as tower defense games go, I’d put Kingdom Rush ahead of Castle Panic and right behind Ghost Stories and Village Attacks. I do think that Kingdom Rush offers a more unique experience than those other games, though.

If you like tower defense games, puzzle games, and/or tough co-ops, I highly recommend checking out Kingdom Rush: Rift in Time.

Thanks for taking the time to read our Kingdom Rush: Rift in Time preview! To stay updated on all things cooperative board games, follow us on Twitter, Facebook, or via RSS.