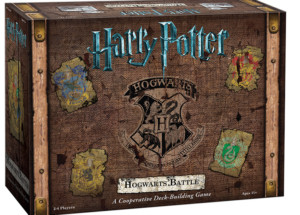 This Harry Potter: Hogwarts Battle review was made after playing the game eight times.

What is Harry Potter: Hogwarts Battle?

Harry Potter: Hogwarts Battle is a cooperative deck building tabletop game in which you and your teammates are trying to take down all of the popular villains from the series. You’ll play through each of the seven books from the series, adding in more mechanics and facing tougher enemies as you progress.

Harry Potter: Hogwarts Battle was designed by Forrest-Pruzan Creative, Kami Mandell, and Andrew Wolf, and it is published by USAopoly. 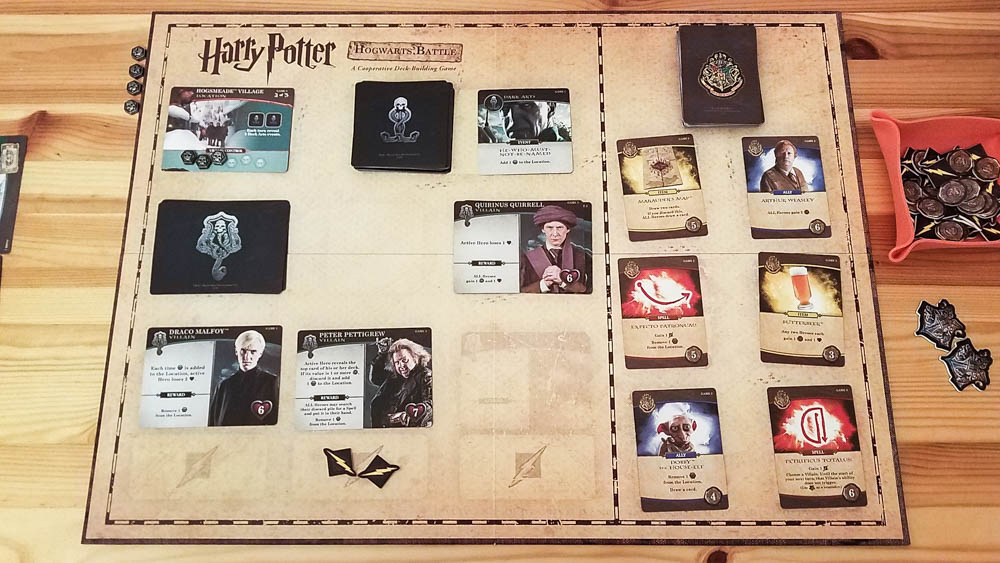 To begin a game of Harry Potter: Hogwarts Battle, each player gets to pick one of the main characters. You can be Harry, Hermione, Ron, or Neville. Each character has his or her own unique abilities as the game progresses, so you will have a slightly different role to play depending on who you choose.

Gameplay is pretty simple, especially when you are playing the first couple of books. You will have a specific number of villains in the villain deck depending on the book that you’re playing; the villains will usually affect you in some way during your turns.

At the beginning of your turn, you will have to turn over a Dark Arts card, which always helps the villains in some way. In fact, sometimes these cards will combo with a villain’s special abilities and knock your health down or affect you in some other way.

You will also have location cards that you will want to keep the villains from influencing. Each location has a set number of spots where the villains place influence tokens.

You will have a hand of five cards at the beginning of each of your turns. Some of those cards will allow you to buy upgrades for your deck. Other cards allow you to perform different actions, including helping other players and doing damage to the villains. Your hand will reset at the end of your turn, so there’s no reason to hold on to any cards.

You can’t “die” in this game, but you can get stunned. If your health goes to zero, you lose half of your hand and the villains gain more influence over the current location.

As you move from book to book, the game will get tougher and more characters and mechanics will be introduced. It never gets too complex and even younger gamers should be able to follow along if they’ve played the game in order. If you’ve played other deck building games, you can actually start the game further into the story. 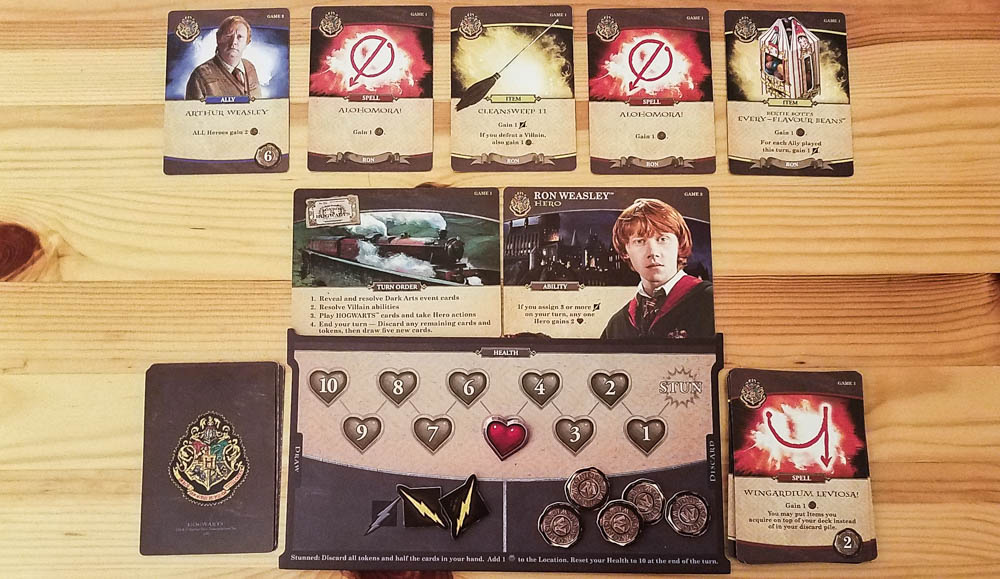 If you’re a Harry Potter fan, you simply have to play Harry Potter: Hogwarts Battle. In my opinion, this is easily the best Harry Potter game out there today because it has all of the Harry Potter characters and people of all ages seem to enjoy it. It is a bit longer than it should be once you’ve gone through the first three books, but I don’t think that will bother Harry Potter fans too much.

Update: Harry Potter: Hogwarts Battle made it onto our Best Family Games list!

Update 2: It also made it onto the Top Deck Building Games list!

Thanks for taking the time to read our Harry Potter: Hogwarts Battle board game review! To stay updated on all things cooperative board games, follow us on Twitter, Facebook, or via RSS.